When we left, we had established the possible tectonic system responsible for the two large mountain ranges related to events in The Hobbit. The Misty Mountains to the West, and the Ered Mithrin to the North. Side note: Ered Mithrin means "Grey Mountains," and Gandalf was called "Mithrander" or "Grey Pilgrim" by the elves… Any guesses as to what "Mithril" means? Tolkien was an Oxford Professor of Linguistics after all.

In order to untangle the Misty Mountains and Ered Mithrin, I suggested we take a closer look at earlier tectonic clues. In this case, the clues found within the crust that makes up the region called "Rhovanion." Tolkien describes the area west of the Misty Mountains as "Eriador" and north of Ered Mithrin as "Forodwaith." Since geologists often use regional names as a convenient way of tracking old chunks of crust, we'll look at the paleo-continent of Rhovanion. 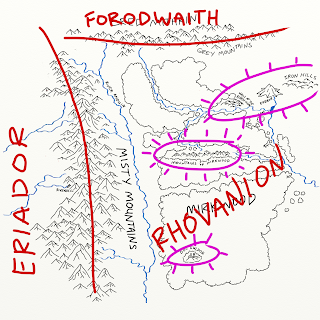 Geologically speaking we have a few landscape features that are probably important. First, there are several large rivers - the Anduin (The "Great River" down which Frodo and his eight companions paddled south out of Lorien). The southern-most tributary of the Anduin on this map marks the spot where Isildur was waylaid and killed by Orcs on his march back to Eriador. The One Ring he was wearing slipped off his finger and fell to the bottom of the river, to be picked up years later by a hobbit/hobbit relative named Smeagol whereupon he took it deep into the Misty Mountains, only to lose the ring and have it picked up by Bilbo on his way to the Lonely Mountain… Goodness, it's like Tolkien spent years of his life piecing together all sorts of history for this Children's book he wrote (which he did, of course). Where was I? Oh yes, rivers.

Along with the Anduin is the Forest River and the River Running - both of which flow South and East. Interesting to note the headwaters of both the Anduin and Forest rivers start in the foothills of the Ered Mithrin. While the Anduin continues straight south along the edge of the Misty Mountains, the Forest river veers off to the East towards the Sea of Rhune. Something, then is creating a drainage divide between these rivers - some topographic high in the northwest corner of Mirkwood. The River Running also skirts past and away from other topographic highs such as the Mountains of Mirkwood, the Woodland Realm of Sylvan Elves (from whence Legolas the Dreamy would come to join the Fellowship of the Ring), and the Lonely Mountain. Another river that flows into the Sea of Rhune comes south of the Iron Hills.

Thus the rivers help us locate topographic "lows" and the area between rivers helps define topographic highs. Along with the features important to the Middle Earth narrative, we get a better picture of the paleo-continent of Rhovanion.

But how do we get at it's tectonic history, now that all the easily-identified features have long been stripped away by erosion or editorial expedience? The key lies with economic geology. Namely iron and gold - the topics of my next post.