Okay, the story so far: we've got this "paleo-continent" of Rhovanion with features like the Lonely Mountain and the Iron Hills. Looking at the formation of gold deposits, the most common places on earth include late-stage igneous melts and hydrothermal systems. Something more easily found deep in the bowels of a volcanic system rather than at the surface. Let's take a few moments to look at the Iron Hills - a few leagues to the East. If our volcanic system was once an island arc, could we get iron somewhere from this system too? 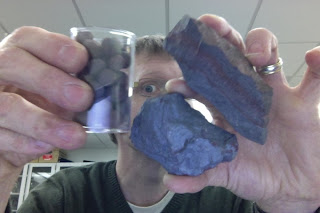 
Again, let us look to some real-world examples. Most of the iron mined in the world today comes out of "banded iron formations" found in places like Northern Minnesota, Wisconsin, and the Upper Peninsula of Michigan. Other places around the world include the Pilbara region of Western Australia. Many of these deposits are old - like 1-3 billion years old - old. Most of these deposits are associated with deeper marine waters, such as continental shelves or abyssal plains in the open ocean. Conveniently, this deep-water setting is something that could also form in proximity to an island arc. And just for the sake of completeness, an island arc can also be home to carbonate reefs. And carbonate rocks at the surface can yield karst (caves & sinkholes) topography - including caves vast enough to house the elven Woodland Realm palace of King Thranduil. Fun times! 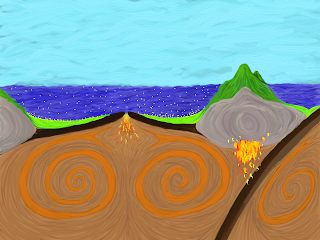 An unexpected tectonic journey: a subducting island arc and associated back-arc basin. The raw materials for our Rhovanion paleo-continent.


Just for fun, let's think about this subducting island a little more. A "Back-Arc Basin" is a feature associated with subduction systems that is counter-intuitive and seems almost magical at first glance. But looking at the dynamics of the situation makes perfect sense. The subducting ocean crust causes the crust on the other side to "roll" over a little bit. Kind of like bending a block of wood creates tension on the top of the bend. This tension can translate into crustal thinning - and produce a small extensional basin adjacent to the compressional subduction zone. Wacky, but then again we're talking about huge slabs of rock that behave differently than we're used to at these immense spatial and temporal scales. And this back-arc basin would have its own associated hydrothermal/igneous system as a result of the decompression melting - hello volcanic-metal-sulfides!

So what do we have? We've got some future Lonely Mountain as an ancient volcanic island arc, rapidly being approached from the rest of the Rhovanion continent acting as the hammer, with the continent of Forodwaith to the north waiting to act as the anvil: 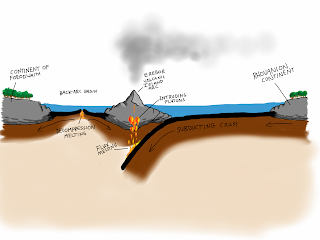 Tolkien-tonics: a hypothesis for the origin of the Lonely Mountain as volcanic island arc. The entire system is collisional in that Rhovanion will eventually collide with Forodwaith, sandwiching the other bits in-between


In the end, we get a bunch of crumply bits along the border of the Forodwaith continent, which may remain as erosional highs (like the Appalachians are today). Then a relatively flat central Rhovanion "craton" and millions of years of erosion exposes the frozen heart of that ancient island arc volcanic system, leaving it as an area of higher, more resistant rock. And chock full of hydrothermal/igneous gold-bearing goodness. Oh, and all those deep marine iron-bearing sediments laid down in that ocean in between Forodwaith and Rhovanion are now pinched up and exposed in the Iron Hills. 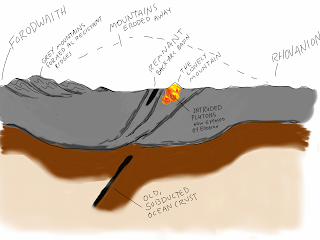 Rhovanion/Forodwaith cross-section during the Third Age of Middle Earth

Whew! That is a lot of geologizing. My sixth and last installment will bring us back to the "current" tectonic setting for The Hobbit.