I'm just about all packed up and ready to head back to the chilly midwest tomorrow morning. GSA this year was one of the more productive that I've had - probably because Steve Gough and the Little River Research & Design team were generous enough to let me camp out in their booth and demonstrate some 3D scanning with the XBox Kinect plus shoot some fabulous high speed video of their new flume.


Here's a snapshot I took of the surface of one of the Em2s after a bunch of people had dug around in it. 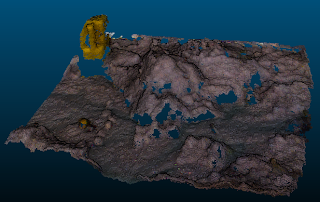 And some lovely high speed video of the impeller on the newly designed "Emflume" that LRRD has been designing.
Rotating impeller on LRRD's "Emflume" from Matt Kuchta on Vimeo.
The impeller that drives the "Emflume" at 4000 fps.

I also got to talk with a bunch of people who are doing cool things with geomorphology and sedimentology. I think I handed out twice as many business cards as the last two GSA conventions combined. I think I'm going to have to start updating the Google+ stream table page soon. 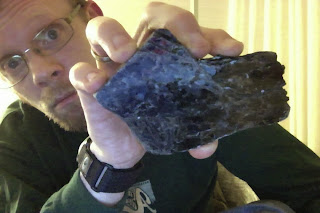 And one of the rock & mineral dealers was selling these monster Biotite books for just $6! I grabbed a couple for my teaching collection. And some calcite cleavage fragments that will not be long for this world (eevil laugh).
Posted by Unknown at 11:21 PM 1 comment:

It's Tuesday, I think. Yes, looking at the computer's calendar, it's definitely Tuesday. Yesterday I pulled out my department's high speed camera and grabbed some footage of sediment being transported within the flume designed and built by LRR&D. Here's some bed and suspended load transport for your viewing enjoyment:

GSA is in full swing

I've been at GSA since Thursday. Friday and Saturday was occupied by a Photography workshop. 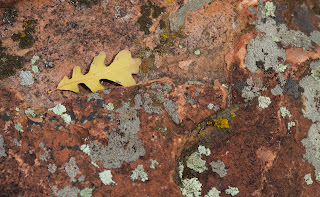 Sunday was my digital poster - then I set up the Kinect scanner at the LRRD booth. Thanks to Steve for letting me set up a live demo of some of the 3D scanning methods I've been working on. 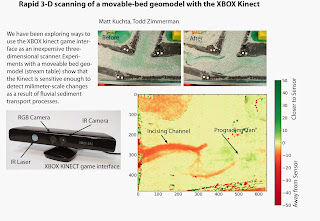 Monday brings phase two of my seekrit project. Here's a sneakey peak:
Flume Paddle from Matt Kuchta on Vimeo.
Previewing the Emflume and preparing for some high speed video.
Posted by Unknown at 9:28 PM No comments:

Headed to GSA in Denver

Well, I'm just about headed through the door. I'm driving out to Denver for the Geological Society of America meeting. Why driving? Because I'm dragging a bunch of kit with me: 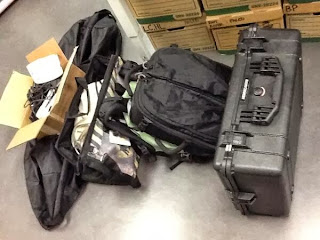 Want to know what the heck all this is for? Come check out my poster it's in the digital poster session on Sunday. And then be sure to swing by the LRRD booth on the showroom floor (listen for the sound of running water and look for the huge crowds).
Posted by Unknown at 8:27 AM No comments:

We have met the enemy and he is us.

I had this whole post written up about the horrible treatment of Dr. Danielle Lee, but then things got  turned upside down even further when Bora Zivcovic was named publicly for sexual harassment and he admitted as much. I don't want to recount it, because others have done so better. Seth Mnookin sums it up quite well. (If you're not familiar with these events, read what Seth has to say first).

I don't feel personally injured by his actions, but many of my online friends and acquaintances are. Science bloggers are all wrestling with their feelings of betrayal and outrage, but the outward expressions of disappointment are much quieter and less widespread than expressions posted related to Dr. Lee's treatment by the now fired Biology-Online editor.

I think one of the reasons for why there are fewer posts discussing Bora's behavior is because it is hard to put this event in the same "other" category that accompanies Dr. Lee's experience. The editor who called Dr. Lee's motives into question doesn't have a real name (at least publicly). We don't know this editor's background or expertise (clearly, not an expert in communicating with people). But we do know Bora. We've known him for years as a major driving force in science communication. He has been an ally, friend, and colleague. He has been one of us. And now it's come to light that he behaved in a way inconsistent with what we expect of those in a position of authority. And not some nameless authority, but one of our own who we have looked up to.

And that makes it harder. We want science communication to be a big tent, where everyone can come in and talk about what interests us. We want anyone with a passion for STEM and science communication to be able to pursue those dreams and explore them to their fullest. But no one is going to want to participate if, by being different, they receive unfair treatment. And Bora's actions were no less damaging to diversity in STEM than those by the Biology-Online editor.

If we want to increase the diversity of the people in STEM fields, we have to change. When I say "we" I'm referring to white, cis-gendered males. People like me. I am aware, painfully so in some cases, of the privileges I have. But this is the thing that really gets me about privilege: 1) they aren't obvious, 2) it takes someone without those privileges to point them out, and 3) it usually requires those with that privilege to change. Dr. Lee's experience would not have been my experience in a similar situation. My female friends and colleagues face every day with a set of challenges I haven't, nor will I ever likely have to face.

One of the questions that invariably comes up during or after events like these is, "what can we do?" How do we embody the change we want to see? I don't have an answer, but I have a plan. And that is to listen. I find it's a lot easier to recognize my privileges when I hear other people talk about their experiences without that same privilege.

I was going to sit and think about whether I need to add something - to mull it over. But I was reminded that this continues that "deafening silence" others had pointed out. I don't want my own self-doubt to imply that I condone Bora's actions. I hope Bora's contrition is real, but I deplore harassment of any kind, especially by those in positions of authority. I want STEM to be a place where fascination, not trepidation, overwhelms you.


*The title is borrowed from a line in the comic strip Pogo, by Walt Kelly.


LadyBits is posting a call for submissions to recognize and avoid sexual harassment.

And This. This is important. If you are a white, cis male you need to read this and not just go "yeah, yeah, that's someone else behaving poorly." Read it and recognize how your behavior contributes to what others think is okay and acceptable. And that even if you don't condone it, because of that behavior by others, people do not trust you.

We are the enemy, not because we are trying to be, but because those of us who do not want to be the enemy have been silent. I don't want to be silent. But I don't want to drown out the voices of those who deserve to he heard. Consider the end of my silence, but not the start of my speaking for others.

Today is Ada Lovelace day. I want to draw attention to the wonderful women scientists I know - from my undergraduate advisors (one of them was my art major advisor) and my graduate advisor (I wouldn't have gotten my PhD without them), to my colleagues at UW-Stout. And, most importantly of all, my wife. I wouldn't be who I am where I am without her.

Not only is she a brilliant scientist, she's also a wonderful person. Tomorrow is going to be our ninth wedding anniversary. Thanks for being with me, my dearest. 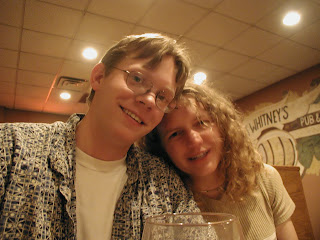 The two of us many years ago. Photo by Chris Schmidt. 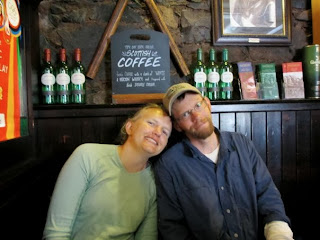 Mandy and I in Edinbourgh last summer. Photo by Kelly McCullough. 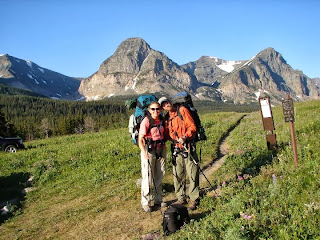 On our way into the backcountry at Glacier, NP.

Posted by Unknown at 8:24 AM No comments: