A slight change in direction - Moving the Blog

It's been quite the academic year. The spring semester is now finished and final grades are just about finished. Summer research is gearing up and I've got a backlog of ideas to share via blogging and science videos. Therein lies the challenge: I started this blog primarily to talk about my PhD research - a topic that is near and dear to my heart, but not something I spend most of my time on these days. In fact, most of my successful projects have been as a result of the "Dirt Lab" and science demo videos I've put together.

So, to capitalize on the fact that most of my blogging deals with geoscience education and outreach I'm going to focus on those posts and house them on "Dispatches from the Dirt Lab." The video demos will find a home there along with information on the props themselves so other people can make their own.

Plus, I've got a fabulous announcement coming up soon :) 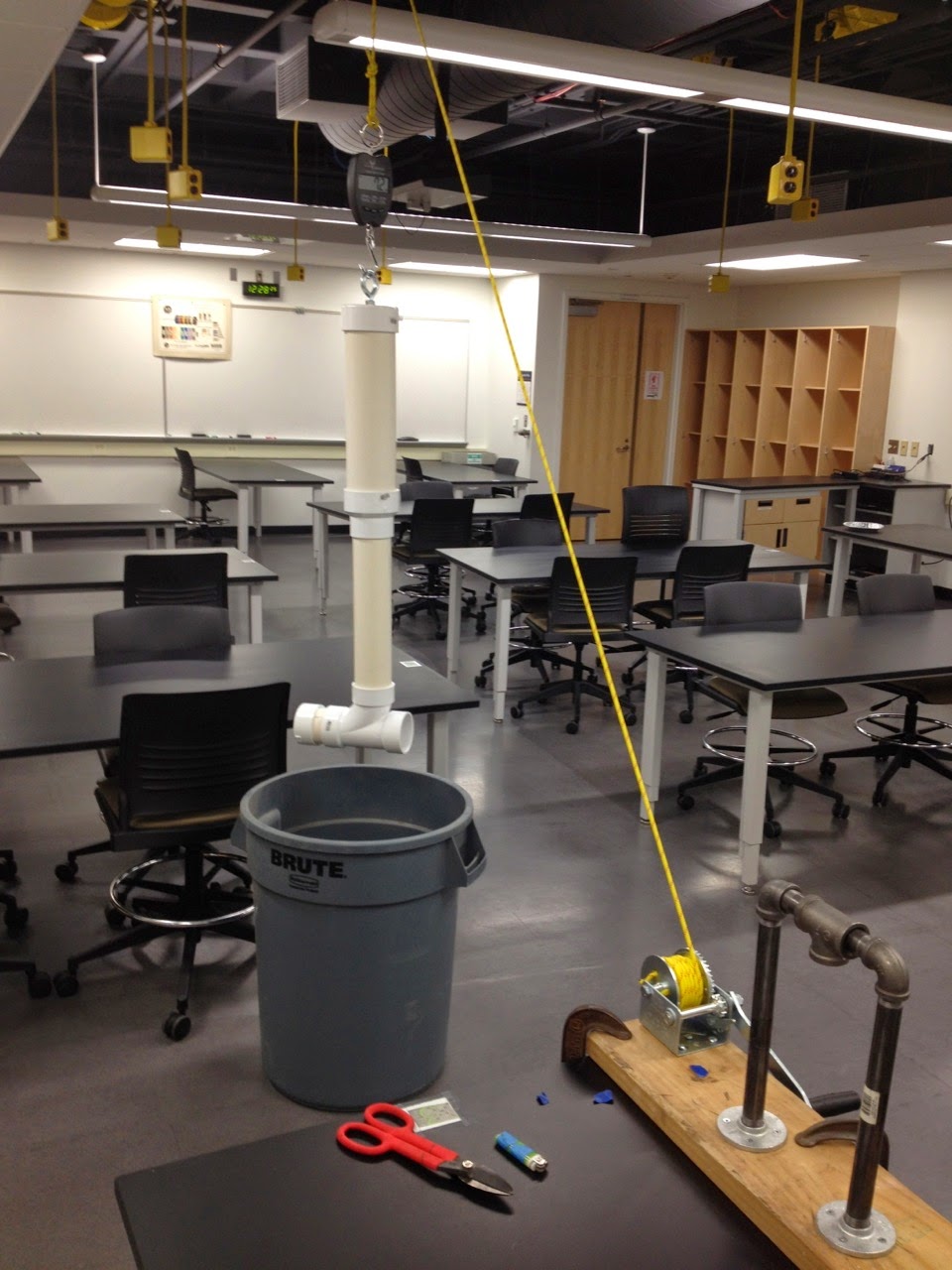 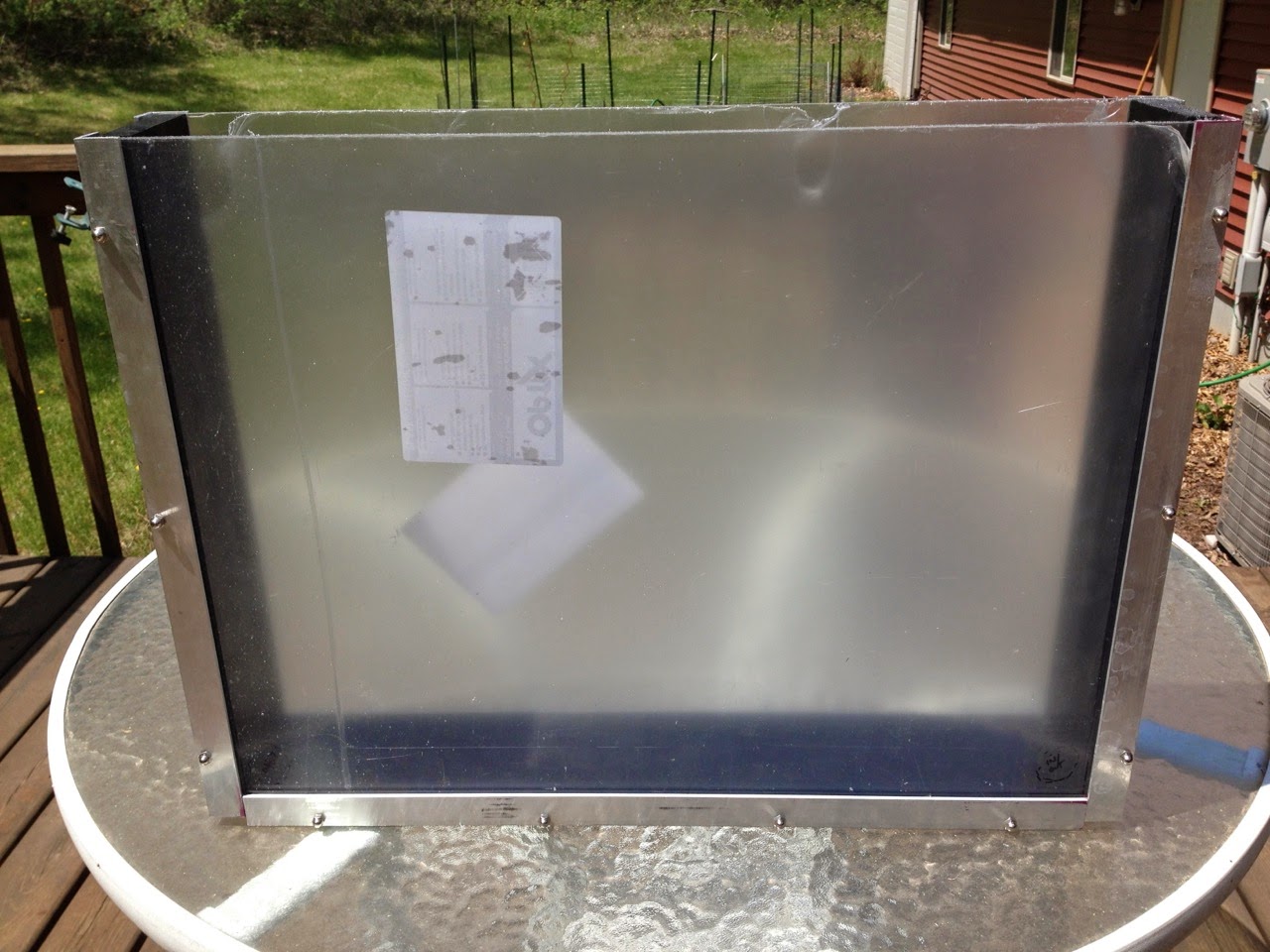 Advisement day is today. We've got plenty of advice for students. But a big goal for me is to cultivate a sense of ownership and urgency in our students. I want the students to drag us in to fabulous projects and opportunities, rather than waiting to be served. Posted by Matt Kuchta at 9:43 AM No comments:

I've been dabbling in astrophotography lately. I'm building a "barn-door" mount and also fitting a worm-drive motor to an old equatorial telescope mount. Some follow-up build info and explanations are in progress… 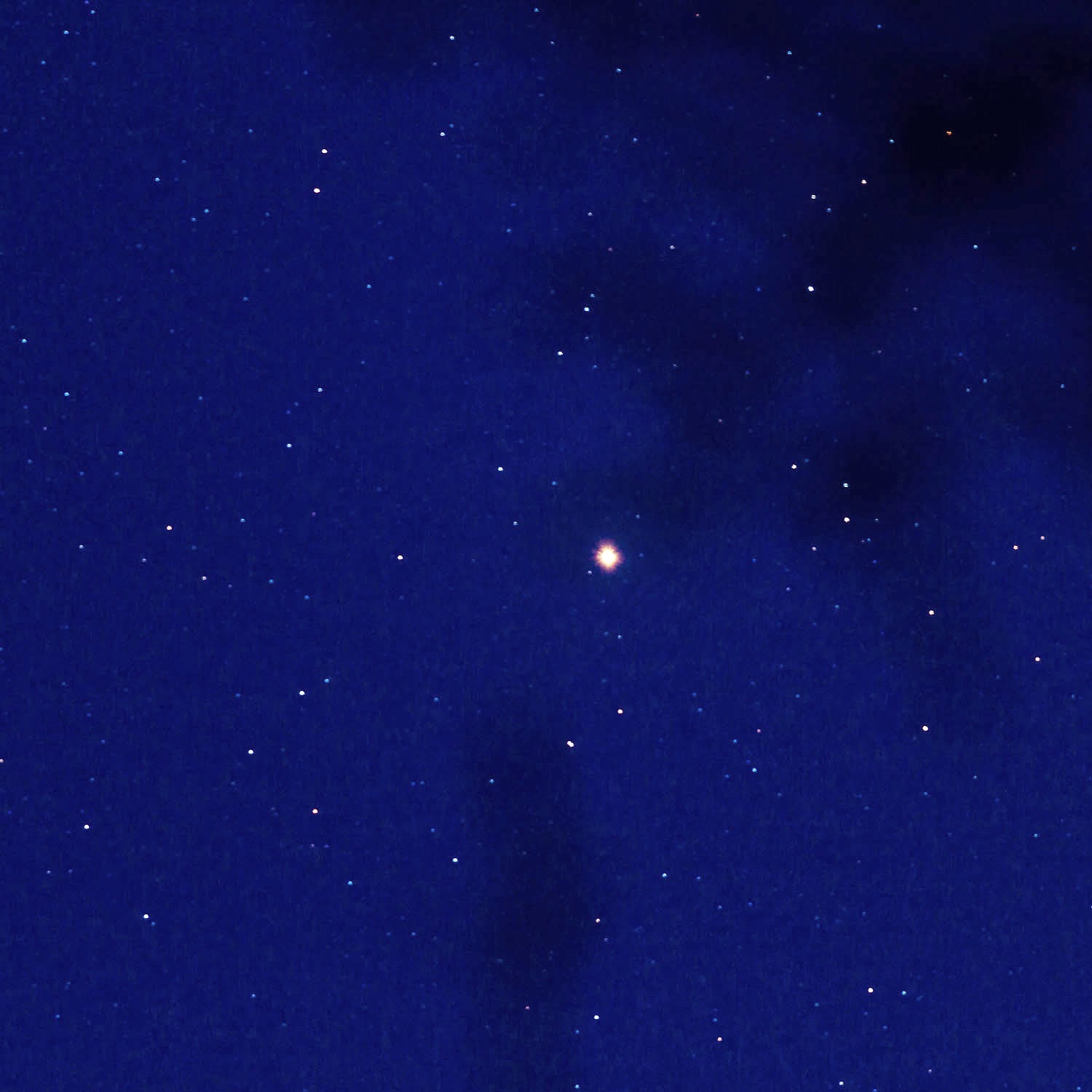 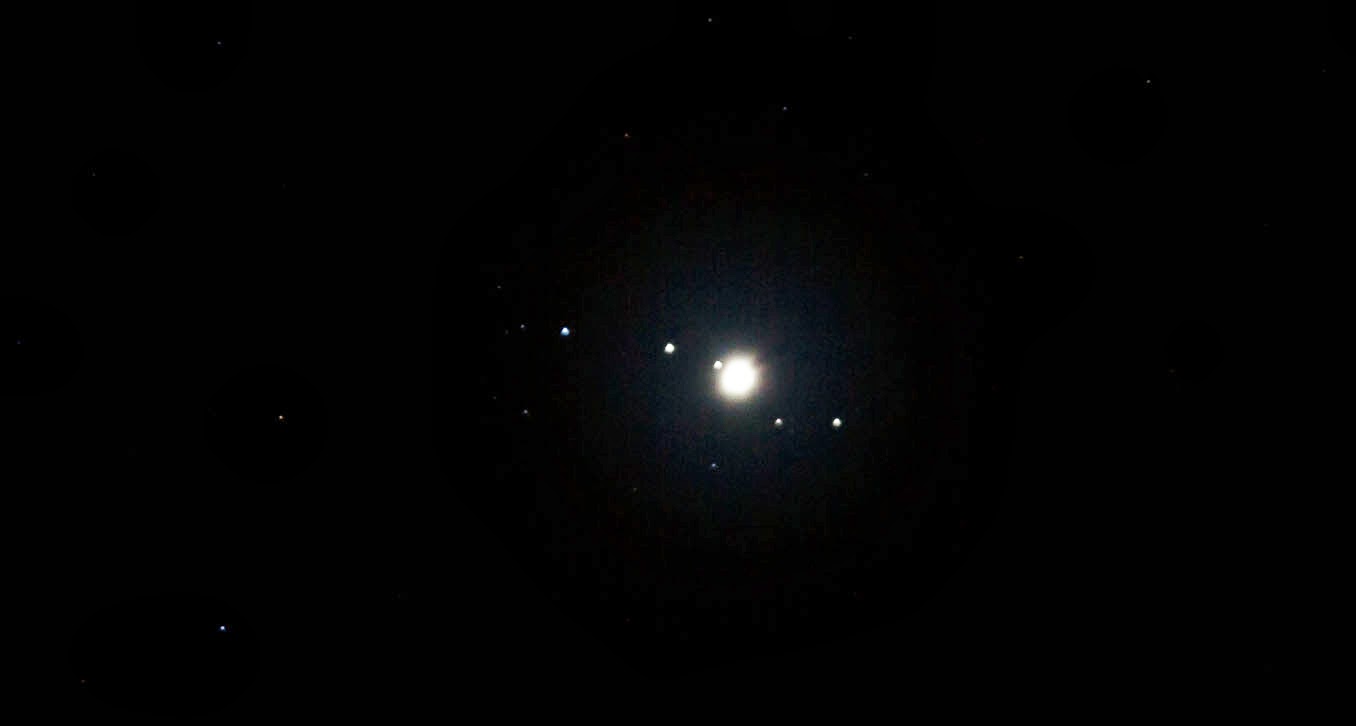 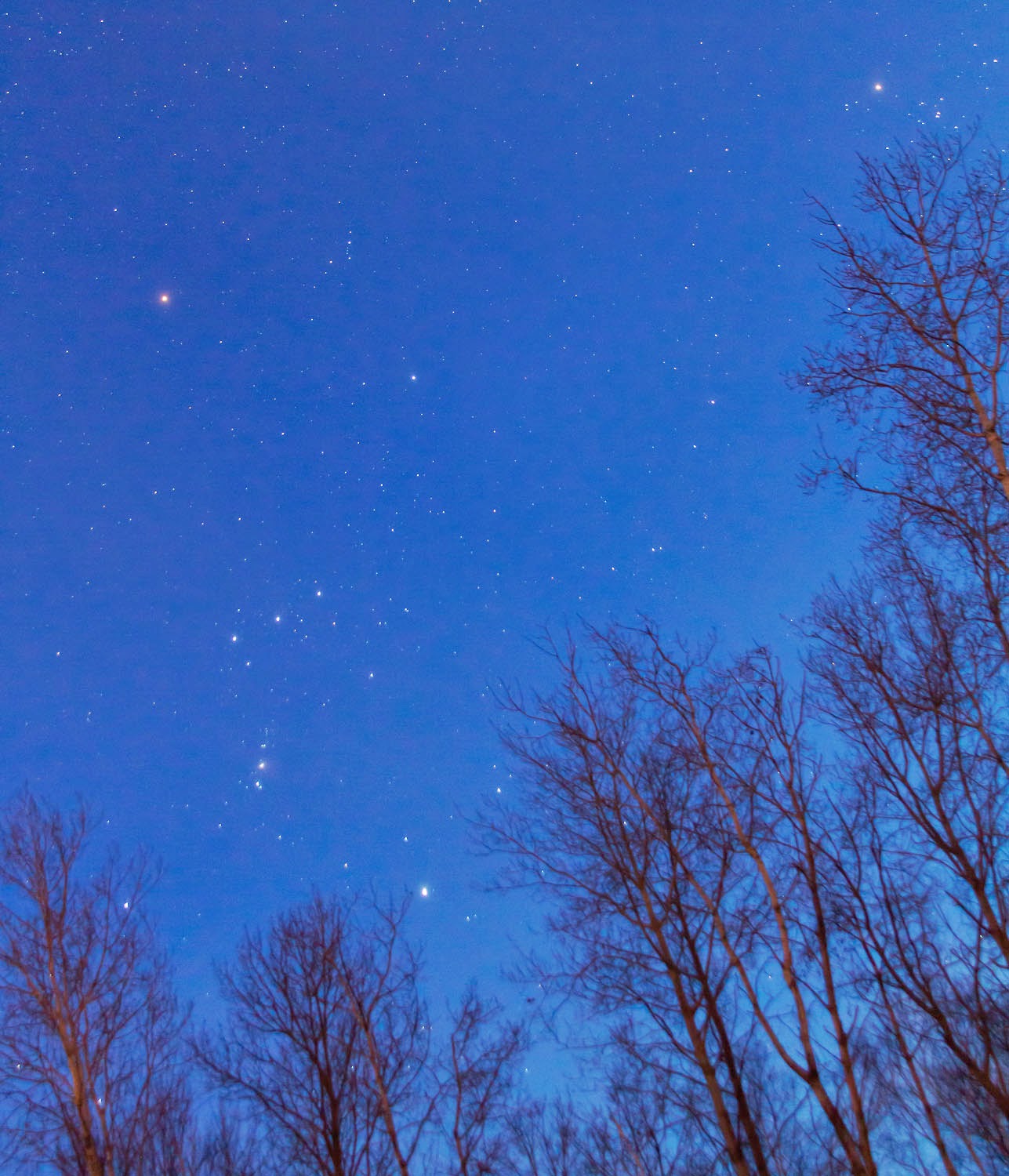 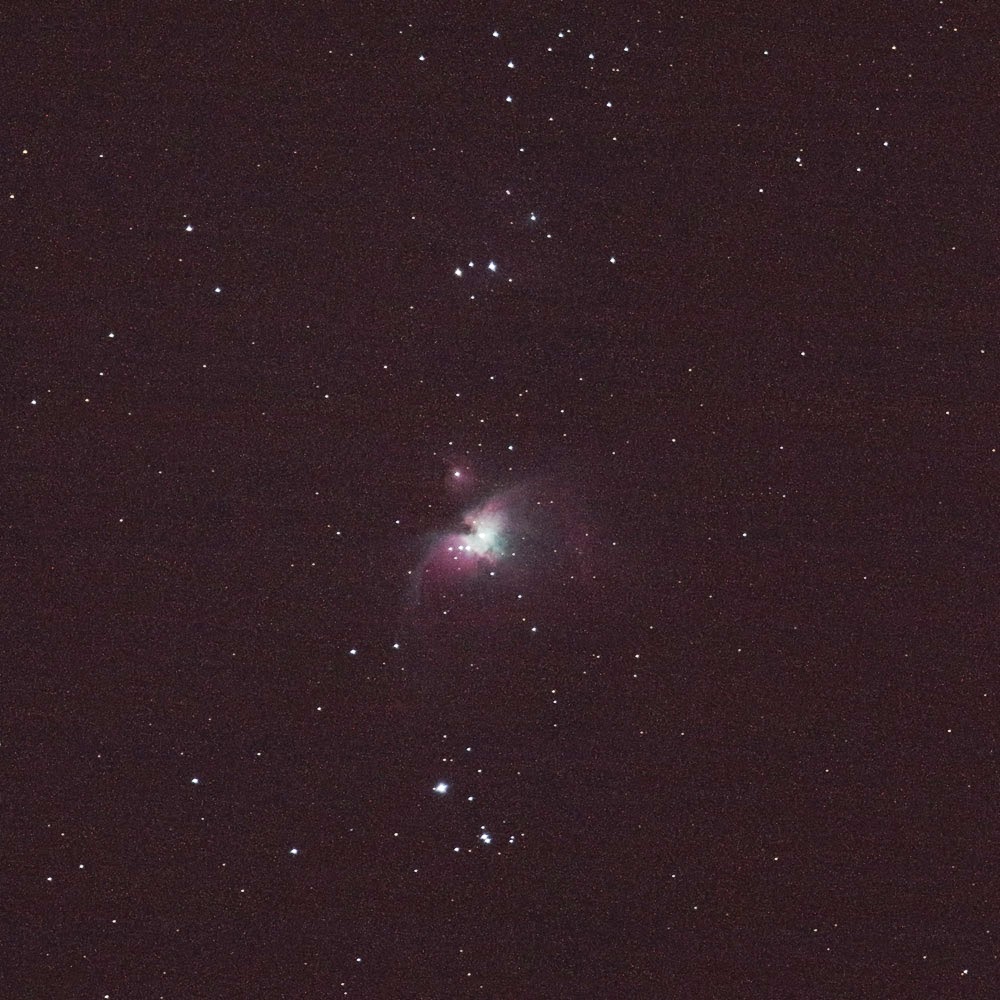 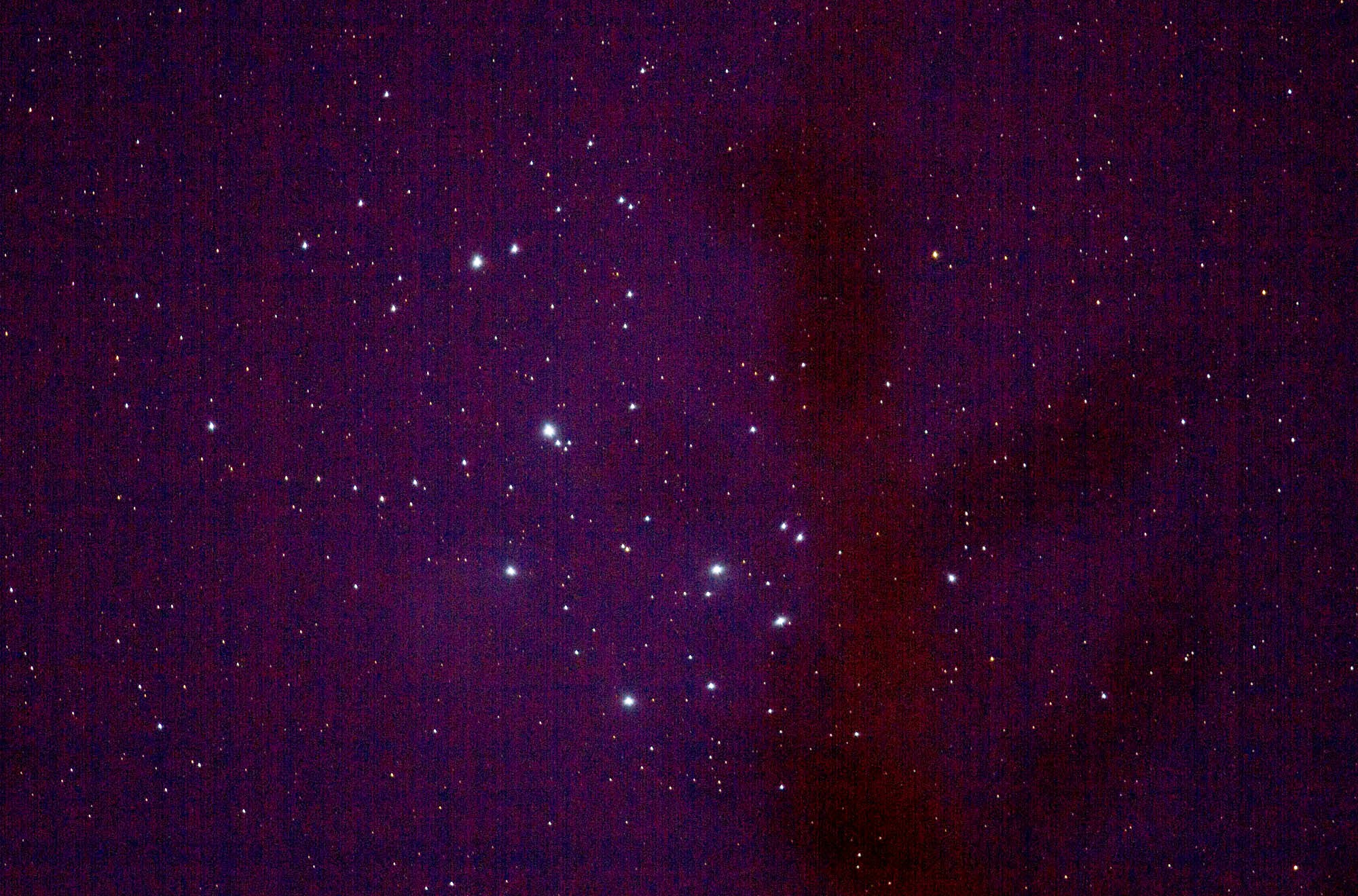 The Egyptians worshipped us as gods. Future archeologists will look at your Facebook timeline and reach the same conclusion about you. Now, feed me. 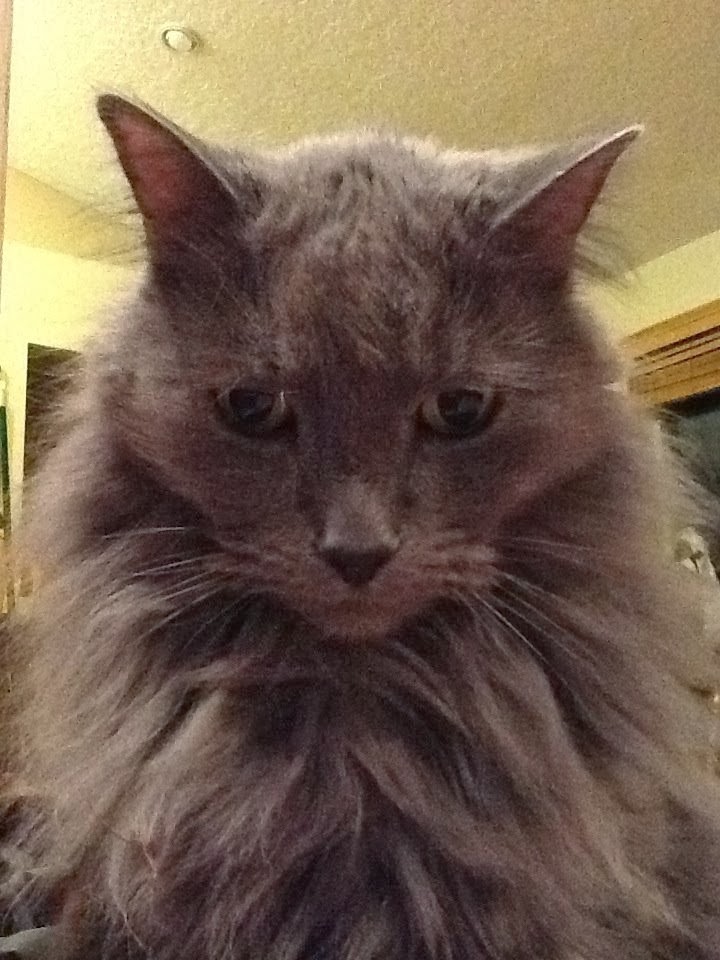 Email ThisBlogThis!Share to TwitterShare to FacebookShare to Pinterest
Labels: cats

My biggest problem with photography during field work is the issue of water and dust. Neither of which are really good for expensive cameras. So I usually have to separate my time into "digging in the dirt" time and "taking pictures" time. Not a big problem, but also not terribly convenient.

My wife and I went down to Belize over winter break and I was looking for a camera to take snorkeling. Steve Gough (LRRD) had a recommendation of the Pentax WG90. Based on his description, this sounded like a good set of features, but Pentax had updated this camera to the WG-3. Based on my experiences so far, I can only say that Pentax's changes have improved their earlier design and make it even more useful for field work.

First, one version comes with built-in GPS tagging (didn't get that version, but I do plan on getting one for field work this summer with the GPS option). The 1 cm macro feature does a pretty good job of getting up close to the subject. It comes with 6 LED lights around the lens to help illumination at such short distances. 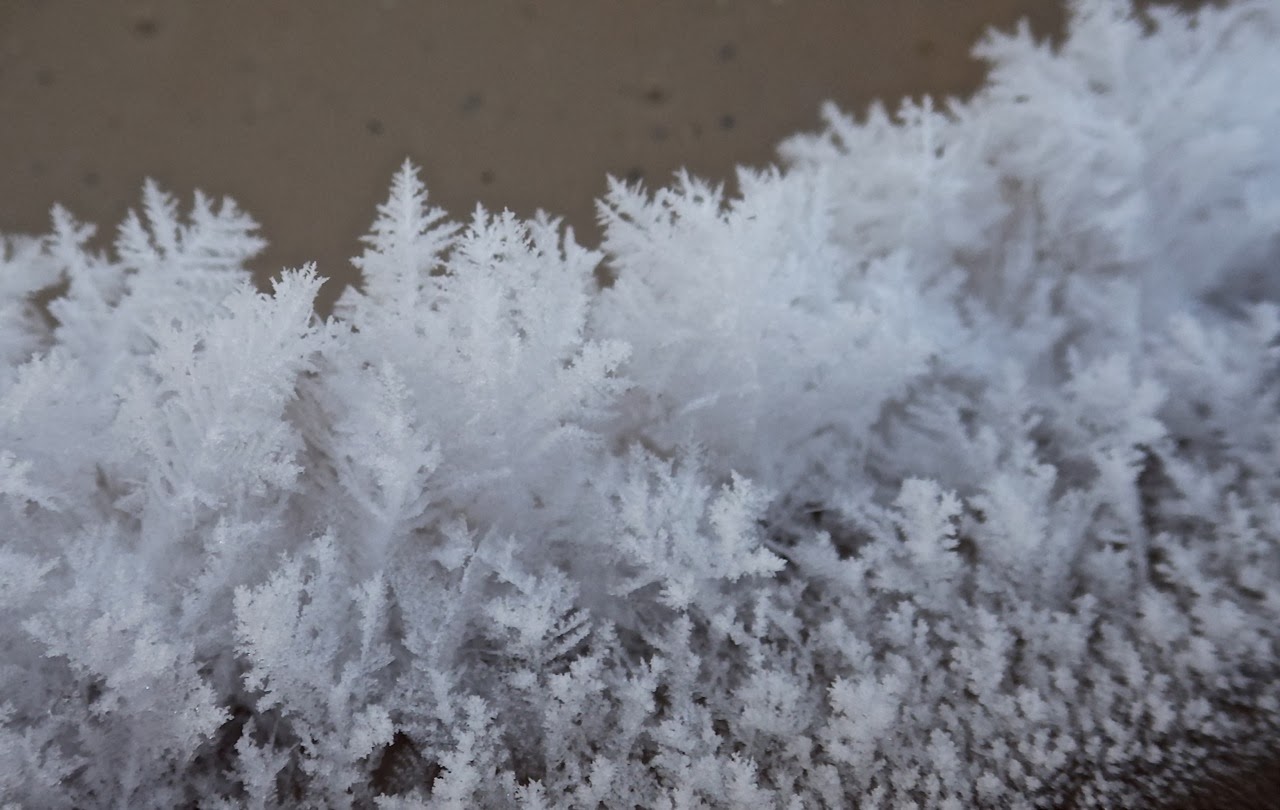 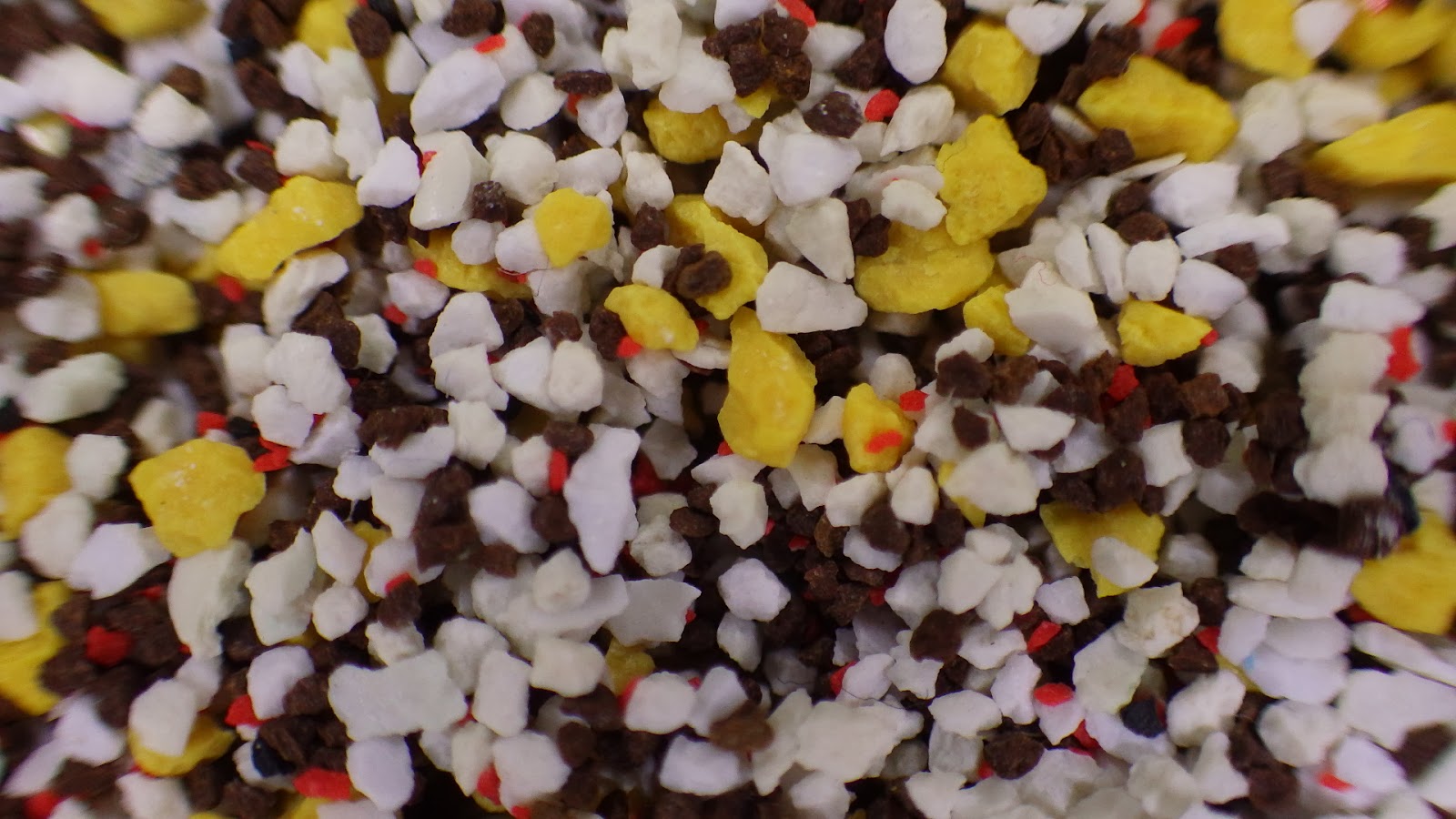 White grains are about 1mm in diameter

Looking at reviews on Amazon, the only recurring complaint (not easily attributed to user error) seemed to be about the zoom mechanism failing. Given that I use this camera at its widest setting more than 90% of the time, I'm not too concerned about it. And so far after 3 months of heavy use, it's been fine.

But the best part of this camera has to be the fact that its waterproof. Pentax advertises it as waterproof down to 45 feet, but so far I've only managed to take it down to about 10 ft. It is important to rinse it off after taking it in salt water and dry it off before opening the battery door. Carefully wiping the rubber gasket and battery compartment to keep grit out helps maintain the water sealing. 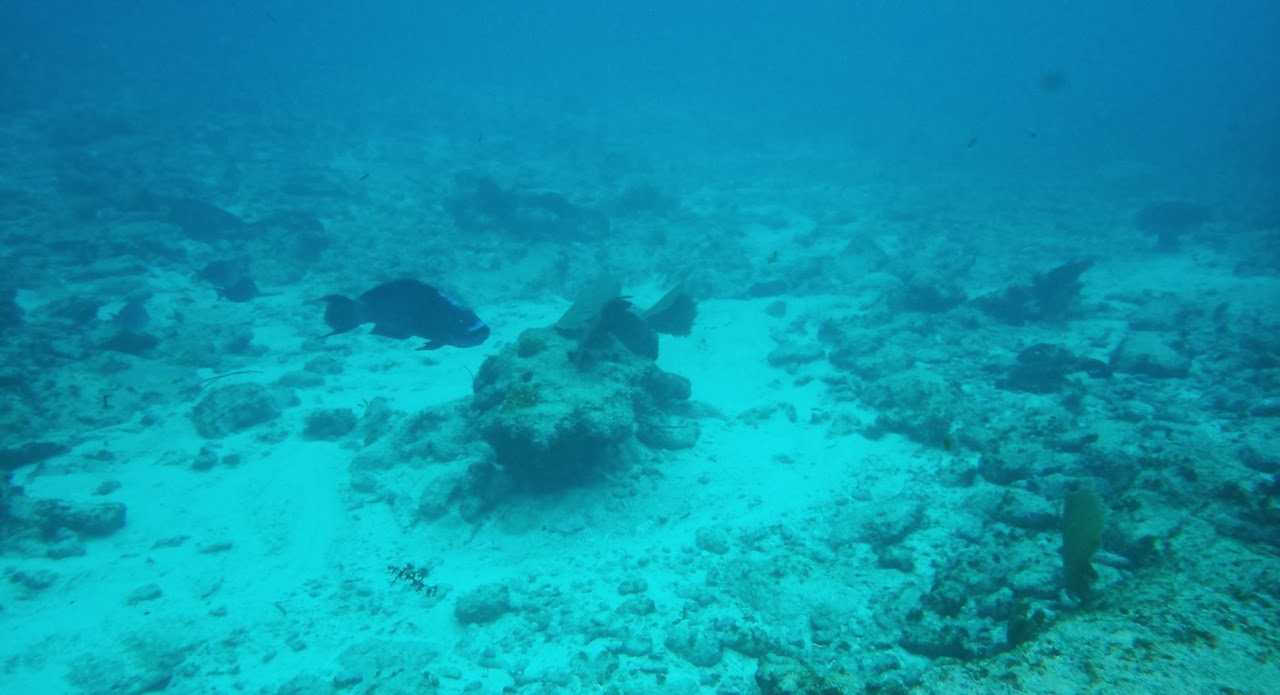 To make the camera waterproof, all of the moving parts are sealed behind plastic or metal. This means no small joints or slots where dirt can get in either. Cleaning the camera is basically dunking it in a stream or rinsing under the faucet. A lens cloth to polish the front of the lens helps eliminate smudges or water spots.

I'm still coming up with ideas for teaching and research in sedimentology/hydrology using the video capabilities. Here's a rather long (10 min) video showing some examples of important sedimentology concepts:

Sedimentology using the Pentax WG-3 from Matt Kuchta on Vimeo.
Posted by Matt Kuchta at 9:44 AM No comments:

One of the challenges in teaching Plate Tectonics to introductory students is that - along with being spread out over a huge scale - most of the maps we use are flat, whereas the plates are actually distributed across a sphere (oblate spheroid, technically).

With most map projections, the polar regions are heavily distorted and much larger in comparison to equatorial regions. So, for instance, if you want to reverse tectonic motions and reassemble the continents into Pangaea, you run in to issues of mis-matched continents. Even worse, students begin to assume that Greenland is really that big and there must be some active tectonic boundaries around such a huge land mass.

A globe tackles the issues of projection and relative scale, but then students can't see what's happening on the back side. After a little digging around, I stumbled upon this graphic on Wikipedia, based on Buckminster Fuller's "Dymaxion" globe - the earth projected onto an icosahedron, but done in a way that minimizes distortion of the land masses.

The next part was deciding how big to make it. I wanted to be able to remove the continents and shuffle them around on the board, so they had to be big enough to be visible from across a classroom. I settled on 20 inches (~500 cm) for the sides of my equilateral triangles (based in part on globe size, but it was also the largest size that would allow for multiple whole triangles from a single piece of black foamcore. I got out my 30/60/90 triangle and meter stick and began cutting. I ended up with about eight half triangles in addition to 16 full triangles.

Cutting out ALL THE TRIANGLES!

The finished stack, with reference map/model.

Testing out the fit.

I laid out the panels to form two halves, each pentagonal pyramid half has five triangles dangling below it that would fit between the five from the other half. 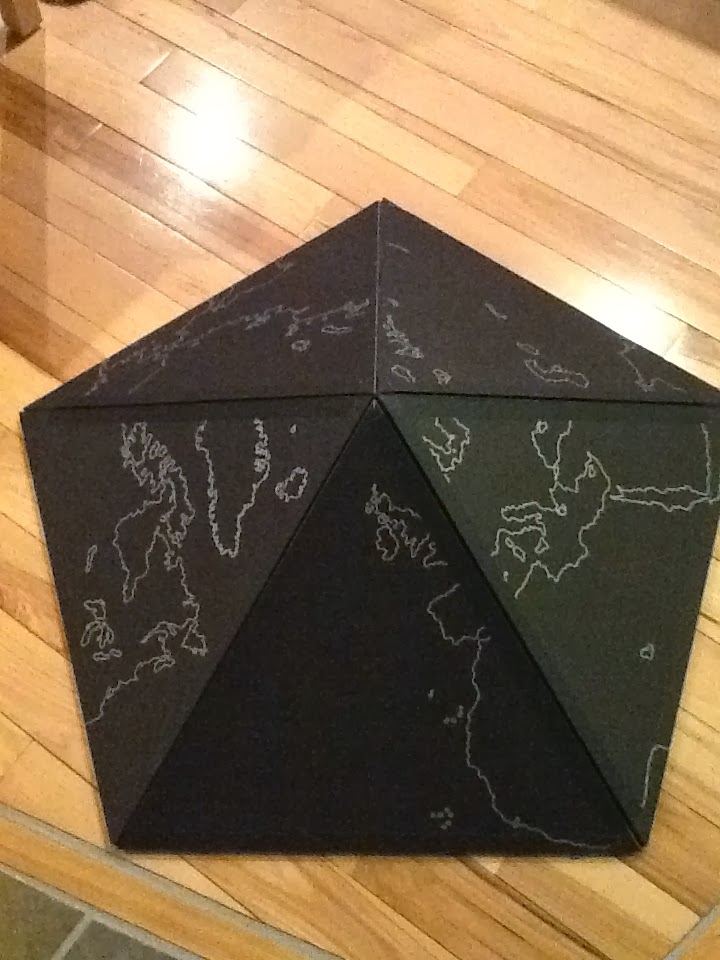 I went over the outlines with a silver marker and taped up each of the pentagonal pyramids. 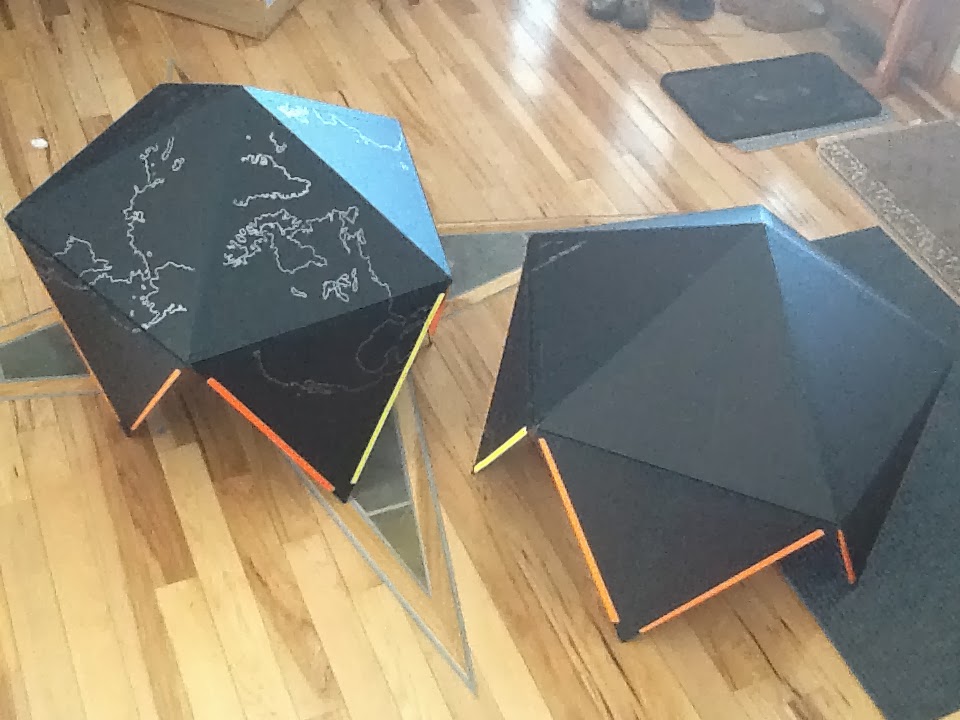 Here are the two taped up halves. The "northern hemisphere" is also outlined, but I had yet to ink the other one. 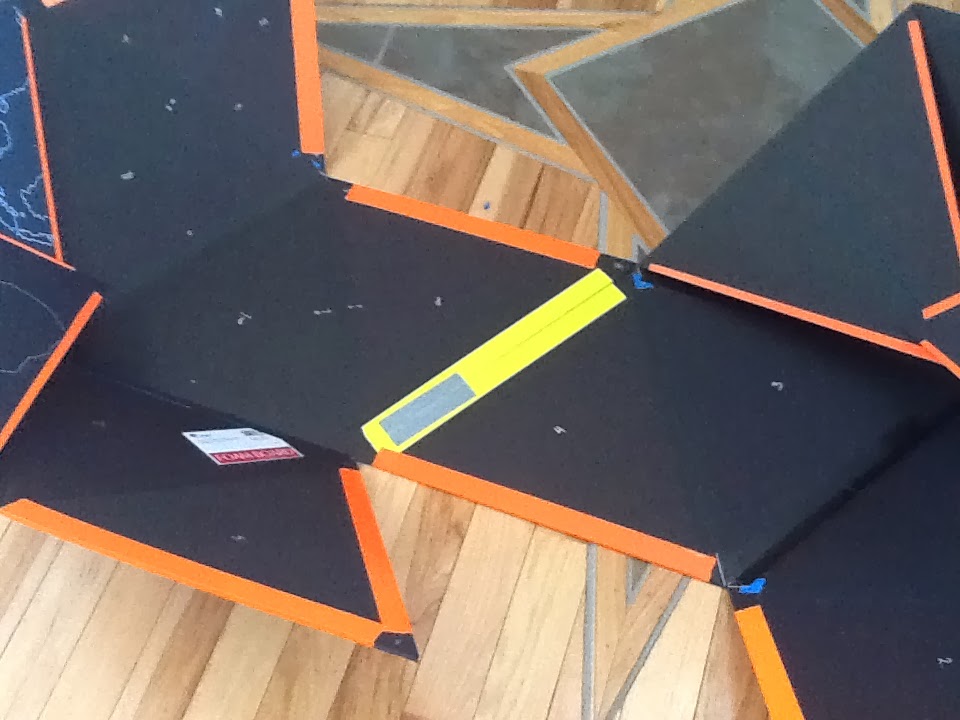 Backsides of the pyramids were color-coded so I knew which edges should line up. 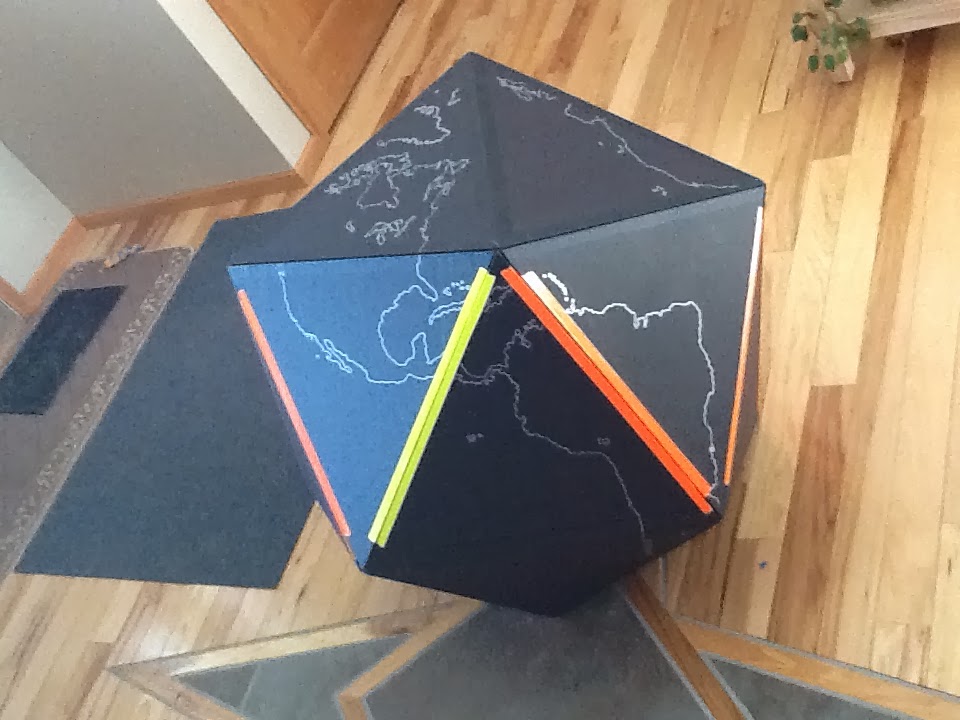 And the whole thing assembled. I lucked out because the narrowest dimension of the icosahedron was about an inch less than the width of our door. 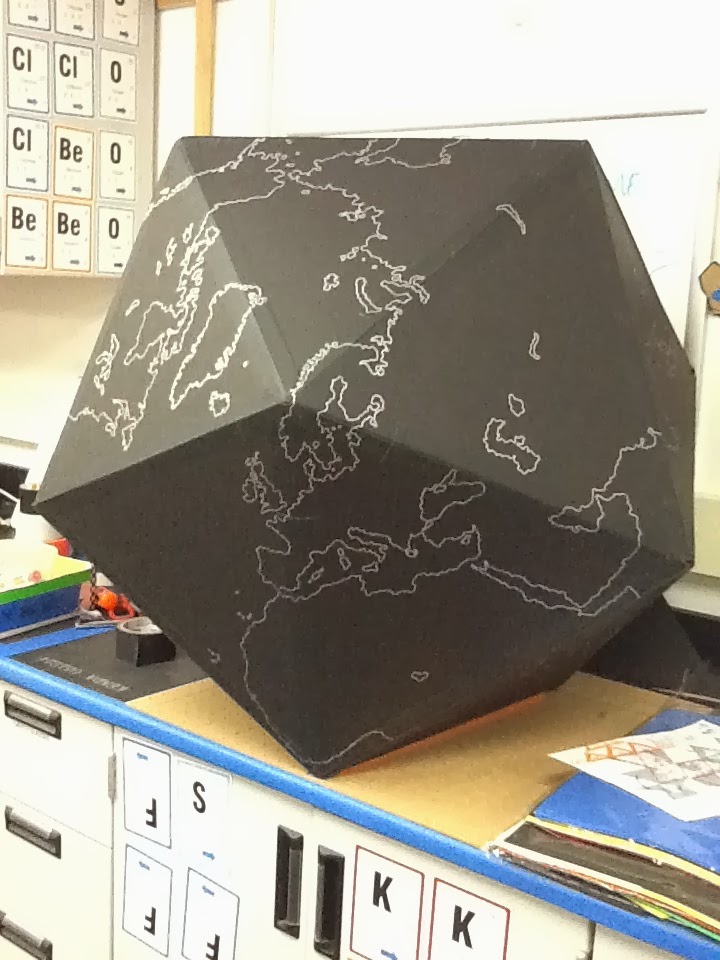 I re-covered the colored tape with black to blend everything together. 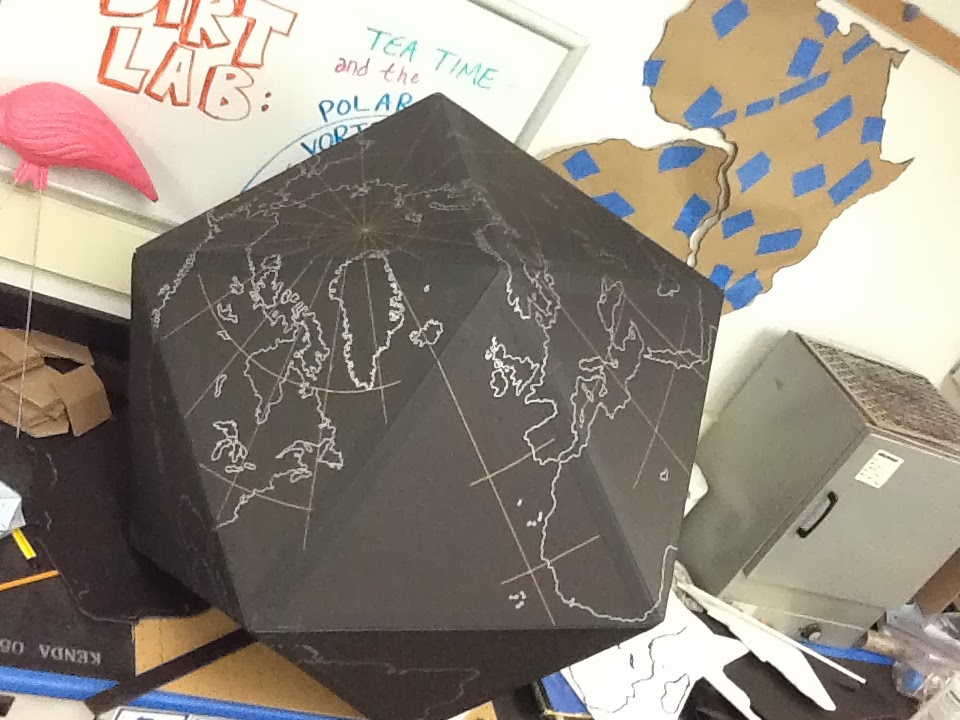 Adding latitude/longitude lines in a bronze/copper color. Some of these were transferred using the soft pencil technique for the continent outlines, others were sketched in based on measurements scaled up from a reference print of each triangle.

A "western hemisphere" view of the finished globe. 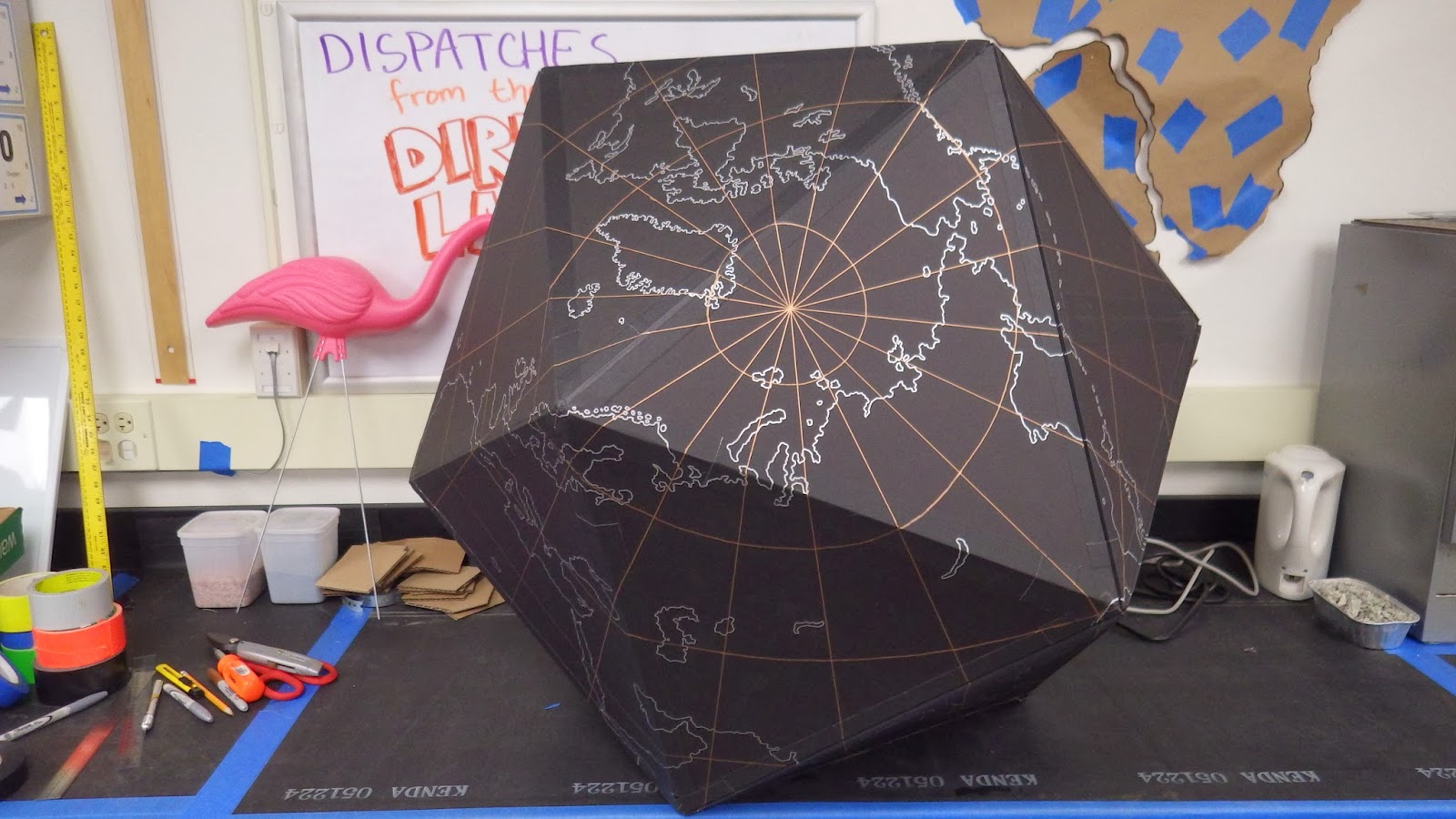 "Northern hemisphere." Incidentally, the pink flamingo in the background is about 22" tall.

A closer view of North America. I really like how the silver stands apart from the bronze and both show up well against the black background. 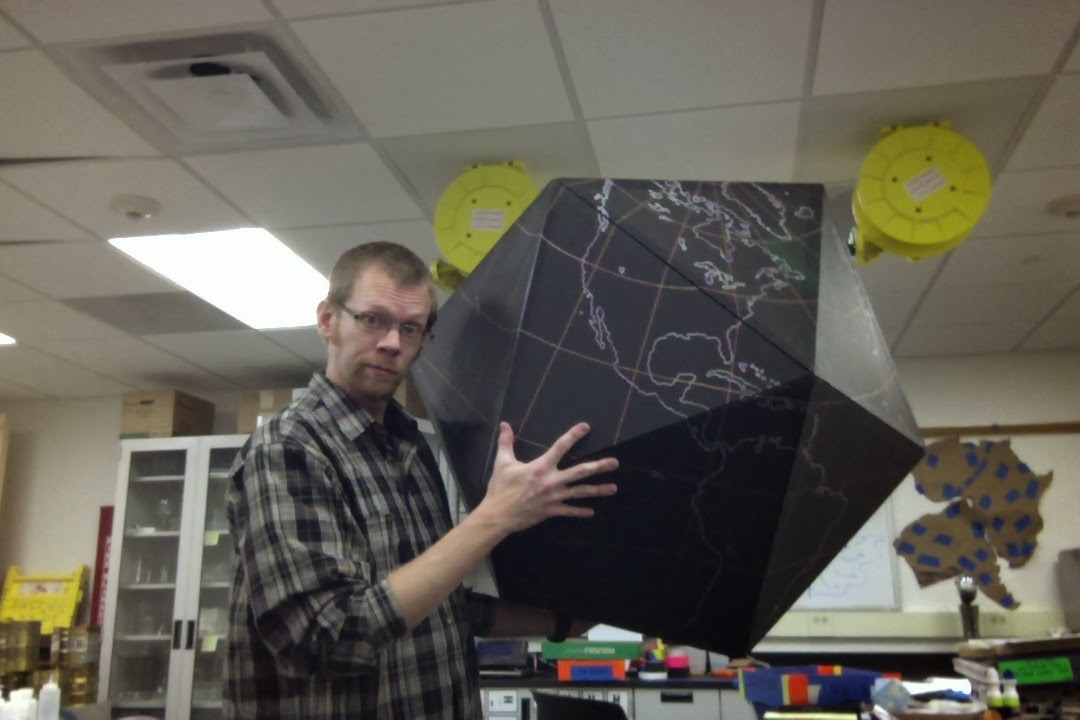 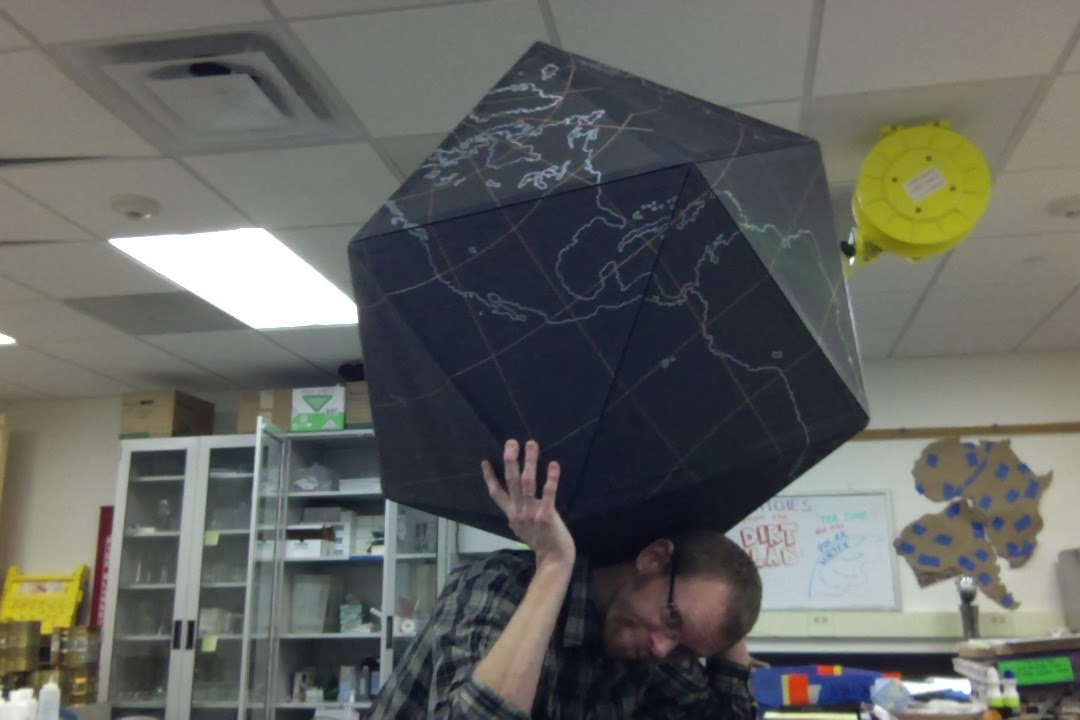 "Atlas, it's done" (pun shamelessly borrowed from a friend).