I've been measuring how much capillary rise occurs in several columns of sand. I'll be using the methods and data generated to teach my Soil Science students about the relationship between soil texture and hydrology.

The data above were generated by plastic tubes filled with compacted sand - each tube was a different diameter. I used the same kind of sand for each experiment. And let them run for many days. The first experiment only lasted for about 300 hours, but I let the other two go for over a month. That's more than 1000 hours! Certainly the longest single experiment I've ever done.

You'll notice that one of the tubes shows a marked jump in the capillary rise rate at around 100 hours - I suspect this is due to the presence of more small sand particles (and smaller pore spaces) close to the top of the column. I've split the sand into 2cm "slices" from that column and I will be sieving the sand to check this hypothesis out.
Posted by Matt Kuchta at 9:44 PM No comments:

My gastrogeological blog post for this month's wedge is about pasta. Dried spaghetti, actually. 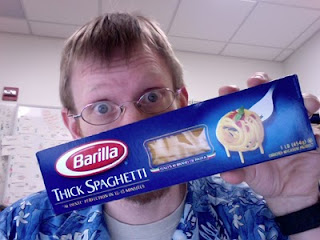 In geology, we often like to use models to demonstrate properties of rocks and their behaviors. If you take a piece of uncooked spaghetti and bend it a little bit, you'll notice that it springs back when you let it go. This elastic property also applies to rocks. If you bend the spaghetti enough, it will break. The spaghetti can deform as an elastic material up to a certain point, then it will break (displaying brittle behavior). 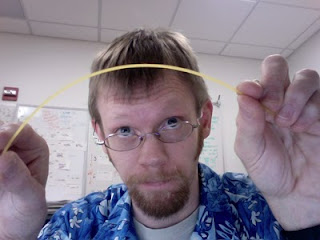 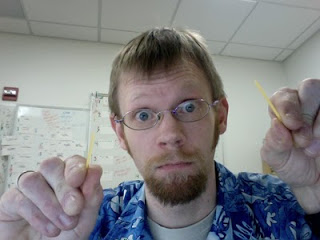 In geology, we call this deformation "strain." The amount of force applied per area is "stress." With a little bit of stress, you can observe strain - but the noodle can go back to its original shape when the stress is removed. With more stress, the spaghetti noodle breaks - and the broken pieces spring back to their original shape. It takes energy to deform the spaghetti. When the spaghetti breaks, it releases much of that stored-up energy as the pieces rebound elastically.

In many ways, this is how rocks behave - they can strain like an elastic material to a certain point - then they break as a brittle material. If we imagine that areas where rocks are under a great deal of stress, like convergent or transform tectonic plate boundaries, we can see (at least in part) why earthquakes release so much energy very quickly. Only after the strength of the rock is exceeded do they move - and all that stored energy is released as the rock rebounds from that original deformation. This is one part of how geologists can predict the possibility and potential strength of an earthquake. The strength of an earthquake is in part proportional to the amount of stress applied to rocks, the amount of strain accumulated in them, and the ability of the rocks to rebound afterwards.

If the rocks are "squishy" and deform plastically (they don't rebound after the stress is removed), they won't release a lot of energy. Cold rocks not subjected to lots of confining stress (unlike those close to the mantle), can rebound fairly easily. And in many places, the maximum earthquake possible is proportional to how much strain the rocks can accumulate before they finally break. Which is why a magnitude "10" earthquake is very unlikely - few rocks are strong enough to accumulate that much strain and then release it. 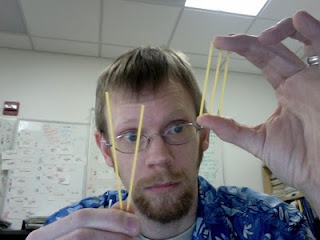 If you have tried breaking spaghetti, you may have noticed that it rarely breaks in half. Instead of two pieces, you often end up with three or even four. These pieces are often of similar size - suggesting that some characteristic behavior is at work. This phenomenon has been studied in detail - it relates to the way in which the elastic rebound properties of the material actually apply so much stress that it breaks again as it "whips" back to its original shape.

I took a few videos of this phenomenon - but it's already been analyzed and written-up by other people. Plus they have some spiffy (and better quality) slow-motion video:

I'm working on something for the food related Accretionary Wedge. For now, here's a little preview of what I'm working on.

Here's an interesting look at the biomechanics of snail slime. I haven't watched the NOVA video yet, but it looks interesting.
Posted by Matt Kuchta at 10:18 AM No comments: