Finally, I found a picture of Greg Laden, PZ Myers and myself talking smart about evolution. The theme at the con was "Steampunk," so of course goggles were de rigueur. 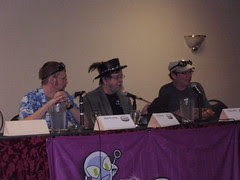 (Photo taken by Bug Girl)
Posted by Unknown at 9:29 AM No comments:

Water-level indicators get a little refinement

I've just wired up three water-level indicators for my wife to take with her to the week-long field course she'll be teaching in a few days. 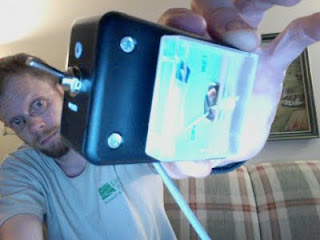 I put the components into a plastic box and added a switch to keep the operator requirements down to a minimum. Plus I soldered all the connections to keep things together a little better.
Posted by Unknown at 10:49 PM No comments:

Once more unto the field, dear friends, once more:
Or close the season up with our sample data.
In publications there's nothing so becomes a scienist
As modest stillness and humility:
But when the blast of desert wind blows in our ears,
Then imitate the actions of Lyell and Hutton...
Posted by Unknown at 9:53 AM No comments:

Email ThisBlogThis!Share to TwitterShare to FacebookShare to Pinterest
Labels: if shakespeare were a geologist

"Haboob" is one of my favorite words. And there was a doozy the other day that blanketed Phoenix, AZ:

I wonder, what is the long-term preservation potential for these kinds of storms? Also, are there analogous subaqueous density-driven sediment flows? Could you get bouma sequences in a haboob?

That is the first time I've heard that word said out loud outside of a physical sedimentology lecture.
Posted by Unknown at 11:47 AM 1 comment:

Email ThisBlogThis!Share to TwitterShare to FacebookShare to Pinterest
Labels: haboob

Evolution Is Self Evident

Something that I didn't get a chance to point out during the CONvergence panel discussion is the simple, obvious facts behind evolution. We did talk about some really cool stuff - and I suspect there will be additional blogging about that later. So what is "evolution?" In its simplest form, evolution is intergenerational change. Evolution itself is NOT a crocodile transforming into a duck. Evolution itself is not the preferential survival of the "fittest" individuals. Evolution is just history: what happened to life on earth, not what life did. Darwin didn't propose the concept of intergenerational change. Darwin (and Wallace) proposed a thoroughly supported, well-reasoned and detailed mechanism that accounted for intergenerational change. You can try to refute Darwin all you like, but even if you succeed, you aren't refuting evolution.

One of the simplest ways of describing the evidence for evolution can be demonstrated with a small bit of logic (borrowed and modified from my colleague at UW-Madison - who teaches a history of paleontology course):

I like this argument for several reasons. First, it's simple. It is also relatively easy for most rational people to agree with each step. It forces any anti-evolution arguments to also be simple or easily tossed aside as irrelevant to the premise (e.g. the mechanism for change may be natural selection, but it doesn't have to be). So what if a former child actor claims evolution is false because some unspecified transitional "Crocoduck" hasn't been found. At its basic level, evolution does not require any transitional form. All it needs is that past organisms are not the same. And to refute that claim, one needs to either deny fossils outright, or invoke pseudo evolutionary mechanisms and double-talk to claim that these fossils are "different" but not different enough (e.g. Kurt Wise and his "forms" argument).

To this, I would ask what level of "difference" would be sufficient? And this definition must be applied evenly and fairly to all past organisms. Because if somehow Noah's diaspora managed to change into the animals we see today, why are some of them spread across vast distances, why are some now unable to interbreed (or if they do, produce infertile offspring)? It also uses (correctly) the same rhetorical trick that creationists use incorrectly. The folks at AiG love to use the "were you there?" argument.

The answer is obviously, no. We weren't there. But neither were they. If the creationist is going to require someone to be present for a moment of evolution in order for it to be accepted as fact, they must also have someone present for the moment of creation (or multiple moments of creation, depending on the brand of creationism). Since the creationist is trying to make a counterclaim that is rather extraordinary, one would need extraordinary evidence for falsifying the assertion that the only way for a living organism to appear on Earth is from the body of another. And no, the book of Genesis is not such a document - in part because it is not internally consistent (it also relies on the assertion that reproduction is the primary way in which living organisms appear on Earth). Think about this: if reproduction weren't absolutely necessary, why bother with the Ark in the first place? Why not boot up Eden v2.0?

What this argument does not do is directly address Intelligent Design. ID is the creationist attempt at rebranding "Creationism" so that they might weasel around the basic premise of evolution - attacking the internal mechanisms of change by some kind of magical hand-waving. The judge in the Dover ID case did an excellent job of spelling out why ID is a load of crap.

When it gets down to it, the way in which creationists make arguments against evolution is contradictory. They attempt to falsify a factual statement or conclusion with a different statement that is neither factual nor falsifiable itself. If the statement cannot be tested, doesn't allow for falsification (testing, fact-checking, comparison to other evidence, etc.) it is not science. In the case of AiG, their claims point to a specific religious source. There are non-christian creationists out there, but none are any more scientific.

UPDATE: Some commenter named "David" offered links to some rather interesting sites. Not worth publishing as they are: being devoid of context, I'm not sure if David was trying to be ironic or not. But the links were fascinating (not in a good way). I'll have to talk about them at some point.
Posted by Unknown at 11:21 AM 2 comments:

Do the new Dropbox terms of service make science harder?

Like many scientists, I work with other scientists who work at other institutions. It's the nature of the game. Collaborators are a good thing. Not a molecular biologist, but want to do genetics on snails? Find someone that does and work together. It's one of the best ways to do good science: complementary techniques and analyses. In order to communicate and share data, some of my colleagues and I use "Dropbox." It's one of those online storage services - you can access a folder/directory with about two gigabytes of storage for free. Need more? You can pay to upgrade. There are several of these kinds of services. Apple introduced it's "iCloud" service - I think it's similar, but I haven't looked at it in detail. But now maybe I will. The new terms of service for Dropbox include some rather unpleasant language:

We sometimes need your permission to do what you ask us to do with your stuff (for example, hosting, making public, or sharing your files). By submitting your stuff to the Services, you grant us (and those we work with to provide the Services) worldwide, non-exclusive, royalty-free, sublicenseable rights to use, copy, distribute, prepare derivative works (such as translations or format conversions) of, perform, or publicly display that stuff to the extent reasonably necessary for the Service. This license is solely to enable us to technically administer, display, and operate the Services.

Much of this is legalese and CYA language to allow a tech somewhere to make sure the system is working as it should, or recover data in the event of a server crash. But the phraseology had many of the artists who were at CONvergence foaming at the mouth. I can't blame them. I wouldn't want to grant any agency royalty-free access to my work that could be used, copied, and distributed as they saw fit. Most artists are very protective (and rightly so) of intellectual property. It's their product. It's the thing they "make" that, in turn, they sell (either the product or rights/access to the product). In science, data and information are our products. Some of this is proprietary or may be subject to an embargo prior to publication (and the journal then has ownership/rights to the product). I doubt a science journal would be happy to find out that their exclusive license still allowed another company to freely distribute new research results.

Dropbox has since updated their explanation (I got an email from Dropbox trying to explain what they meant). My take is they are trying to make it easy for a tech to check on data - without getting individual approval from each customer - and make Dropbox work as it should. It would be inconvenient if a service tech had to contact the owner of each packet of data before they swapped out backup drives or something. But the language was poorly phrased - and I think still is. The implication is that we are allowing Dropbox do whatever it wants ("deems necessary" is excellent weasel wording). And unless there are some pretty good restrictions on the definition of "whatever it wants," scientists and artists are going to balk at using the service (and some have already said they will be dropping the service altogether).

So that brings me back to the title of my post - some of the data I work with is proprietary. The Natural Heritage Inventory keeps track of all the thousands of endangered and threatened species at the local, state, and national levels. The exact location of these species is kept "secret" in that we sign an agreement with the NHI - we can use their data, but we have to control access to it. If we want to make information available to the public, we need to "generalize" the information. For example, I could say "I found Species X in this township (36 square mile area), but I couldn't say "if you go to this creek and find the spot where it flows over the large dark colored rocks just past the highway overpass you'll find the only colony of Species X that we know of." Kind of a Witness Protection Program for rare organisms.

So, how does the Dropbox terms of service affect science? I would really like to get clarification about what the company means by "distribute." Because if the NHI doesn't agree it's okay, I'm going to have to find a new way to share data (maps, manuscripts, species lists, etc.) with my colleagues that does protect the anonymity of the endangered species.
Posted by Unknown at 11:00 AM No comments:

Whew, that was crazy!

Back from CONvergence. Had what I think was an entertaining panel discussion with PZ Myers, Greg Laden and a standing-room only crowd. Thanks to the Skepchicks for organizing.

I was left thinking about why skepticism and sci-fi/fantasy events often co-occur. I think it's because imagination is fun. And important. It's not "reality," but it's still fun.