Who needs to go into the field any more?

I've been spending the last few days studying a high-resolution dataset (2-foot contours, LiDAR-derived) for one of my field areas. I took the contour line data and extracted a three-dimensional surface:

Well, of course we go into the field because we have to test hypotheses derived from remotely sensed data. What are the relationships between the various terraces visible in the picture? Are there materials buried that can be dated either with radiocarbon or optically-stimulated luminescence?

Ultimately, what are the lithofacies (textures, composition, structures that distinguish the deposits) that characterize the sediments within this valley? What are the architectural and temporal relationships between these different lithofacies?

And of course, how can I make a "fly-over" movie of this model without my computer crashing?
Posted by Unknown at 6:45 PM No comments:

So we had snow falling from the sky again today. This has been what feels like an unusually cold spring here in Wisconsin. Looking at the graph from the weather underground, it looks like last month (March) was at or just below the average1 for our neck of the woods - but much cooler than usual just a bit further north and west

Note also that there were warmer than average temperatures for much of the southwest. I find it interesting how much warmer Siberia was at this time (while on the opposite side of the hemisphere, the temperature anomalies were split - both higher and lower than average. Yesterday's strong storm outbreak was impressive, frightening, and a result of these contrasts in warm and cold temperatures. Storms get much of their strength from the contrast between warm and cold air (moisture, temp, pressure, etc). The stronger the contrast, the stronger the storms. I'm not surprised that we have powerful April storms given the big differences in North American temps in March. I am surprised at how quickly and how devastating they were. I'll be very curious to see what the temperature anomalies for April and May are like.

1"Average" in this case is defined as the net total data from 1901-2000. Some "averages" use a 30-year moving window to calculate average temperatures and such.
Posted by Unknown at 10:24 AM No comments:

Thurs-Demo: The one with hot cocoa

My department chair had been noticing that the noise her mug made when stirring hot cocoa changed as the mug heated up. So we shot some video and I present the following for today's demo:

Sound Changes in a Ceramic Mug from Matt Kuchta on Vimeo.

It's fitting, given that we had snow falling from the sky this morning.
Posted by Unknown at 10:15 AM 3 comments:

Thurs-Demo: The one with mud

Today's demo - some more fun things to do with the fine sand that we dug out of the ground on campus. I mentioned this dilatency behavior earlier in a post about footprints in the sand.

Dilatency and Liquefaction of a fine sand from Matt Kuchta on Vimeo.

Posted by Unknown at 1:17 PM No comments:

We don't need no stinkin' sieves

I've been setting up for Thursday's demo. I thought I'd show you how I often separate sand and gravel so that I have enough fine sand for some of my other projects.

Some fun with mud

We collected an exciting type of sand from the outdoor classroom on campus. It's a fine sand and silt that displays an interesting behavior when the rate of strain is fast (like being squeezed, or hit quickly) compared to a slow rate of strain (or if it's shaken).

Clearly, this is screaming for a demo - so perhaps I'll have time to do something with it this week.
Posted by Unknown at 7:54 PM No comments:

Thurs-Demo: The one with all my marbles

Porosity in Differently Sized Media from Matt Kuchta on Vimeo.

It may seem surprising that the containers each held the same amount of water. Think about it this way: there are big pores between big marbles and there are smaller pores between small marbles. There are fewer big marbles in the container, therefore fewer pores. You can even answer the question mathematically - regardless of diameter, a sufficiently large container of identical spheres (packed as closely together as possible) will always have the same ratio of empty space to filled space.

Just a quickie right now though. I had the day that ended up being over 9 straight hours of lectures and meetings. My brain is mushy.
Posted by Unknown at 4:38 PM 2 comments: 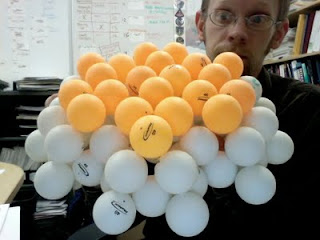 I've been building mineral models out of ping pong balls. The clay mineral structure is composed of Silicon-Oxygen tetrahedrons (white) and Aluminum-Oxygen octahedrons (orange). There is one relatively minor difference between this model and an actual clay mineral (besides the chemical composition and size, of course).

I need to figure out how I can demonstrate cation exchange... perhaps I can stick small magnets on some of them...
Posted by Unknown at 4:01 PM No comments:

There's snow in the forecast this weekend. I get the feeling like the jet stream is playing an overly elaborate prank on all of us. Like Allen Funt is going to drop out of the clouds and start laughing at us in a few weeks...
Posted by Unknown at 8:02 AM 1 comment:

Thurs-Demo: The one that runs on batteries

The Surface Charge of Colloidal Soil Particles from Matt Kuchta on Vimeo.

The idea was modified from Ray Weil's textbook, Laboratory Manual for Introductory Soils (2009). I thought it was a great way to show off the net surface charge of soil particles - I just adjusted the demos optics in terms of wire and battery hookup.

If you think about it, there are lots of other fun things you can do with a 9V battery and an organic suspension...
Posted by Unknown at 8:08 AM No comments:

I've been testing a few ideas for tomorrow's demo video. In the process, I did something weird to Yerba Mate: 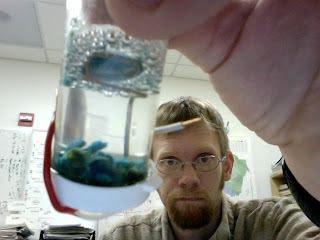 Posted by Unknown at 3:08 PM No comments:

Our public radio station had someone talking about the health virtues of eating fish. With no distinction about what fish are being over-harvested or how farm-raised fish can be worse (or better in some cases).

Last night the national news reported the findings of a study that suggested a link between working overtime and declining health. Followed by a news release (more of a corporate press release, really) that McDonald's was hiring thousands of new workers. Many of these positions would be - wait for it - at restaurants open 24 hrs a day. So they need people to work the graveyard shifts.

At some point I would like the news to point out that while X may be healthy for us, the methods we go about achieving it may have negative impacts on our immediate and large-scale environment. I'm all for eating healthy. But if the only way to achieve these health benefits is to walk out on the ice and club a dodo, I think I'll pass.

Our economy is creating jobs. But these are servile and low-wage positions. Want a job? Do everything you can to get hired - but don't work overtime: it's bad for your health (maybe)...
Posted by Unknown at 8:15 AM No comments:

Look at last week. Compare it to this week. There will probably be a big difference, as April seems to be the month where everything has to get finished. Posting may be light this week. Or it might come in a flurry towards the end of the week as I slowly lose my mind...
Posted by Unknown at 12:37 PM 2 comments:

It's called the "Periodic" Table because it is sometimes a chair.
Posted by Unknown at 4:55 AM No comments: