I was browsing the abstracts submitted to GSA again this year and who should I come across, but more Young-Earth "research." If you browse the "Proceedings of the Creation Geology Conference" you'll see the same basic abstracts (with certain key dog whistles removed from the text). It appears that they have a coordinated source of funding: the "NCSF" otherwise known as the National Creation Science Foundation. Yup - this group got several hundred thousand dollars to "study" the coconino sandstone. This is part of a project they're calling "FAST," or Flood-Activated Sedimentology and Tectonics.

Links to the abstracts:
UNUSUAL BEDDING STYLES FOR THE COCONINO SANDSTONE (PERMIAN), ARIZONA

CAN COMPACTION ACCOUNT FOR LOWER-THAN-EXPECTED CROSS-BED DIPS IN THE COCONINO SANDSTONE (PERMIAN), ARIZONA?

WHAT DO WE KNOW ABOUT MARINE SAND WAVES? A REVIEW OF THEIR OCCURRENCE, MORPHOLOGY AND STRUCTURE

These were all submitted by Whitmore and his students from Cedarville University. It makes me sad to think that these undergraduates are being fooled into thinking they're actually learning something about geology.

Then I searched around some more and found everybody's favorite GSA Young-Earther, Steve Austin, is presenting an abstract:

The second author, Jorge Strelin, didn't ring a bell - I've never come across his name on any Young-Earth papers that I've seen. Nor have I seen his work referenced by these folks. A quick google search led me to a variety of actual, peer-reviewed articles (which was confusing), but this sad little You Tube video then added some context. The video helped, since the clip shows Steve Austin talking about something or other. In particular, the comment thread that has since mutated around it makes things much more interesting. In particular, this quote from "lawilson200" helped clear much of my confusion:

I will let you know what Strelin has informed me. He has mapped out Paleolake Argentino, noting that it was 30 km (EW) and 25 km (NS) and about 75 m deep. He does not know how Austin derived his 5 x 10(6) m(3)/s(-1) calculation, but he concedes he is not certain how to determine flow rate. However, he does agree in general that the release of PLA was﻿ a megaflood. He does feel dubbed [sic?] by Austin, now that he has learned that Austin is with ICR, but it is too late to withdraw his name from the abstract to be submitted at GSA.

So, if lawilson200 is to be believed (I haven't yet verified the statement), Strelin was unaware of Austin's affiliations. And Austin is using Strelin's reputation to lend credence and importance to the abstract. This sounds familiar. And disappointing.

Posted by Unknown at 8:00 PM No comments:

What I'm doing at GSA this year

It's that time of year again. Well, actually, it's about a month before that time of year, which is about 3 weeks earlier than usual. GSA is going to be held in Minneapolis, MN on October 9-12. Some of the geobloggers will be presenting, many will be attending. I know there is at least one planned meetup for the geobloggers to socialize and chat. Since I've got friends in the cities and live about an hour away, I'm grabbing a list of suggestions for your consideration.

I'm giving a talk on Tuesday at 3:05 about my research:


There's also an associated poster session - I had a student working with me over the summer and her research will be there.

One final note: there is a field trip (#442) through the UMV (Thursday through Saturday) organized by the same folks. In fact, it sounds like there's still room if you're interested in joining us for a few days of fluvial geomorphology and landscape evolution.

Posted by Unknown at 9:24 AM No comments: 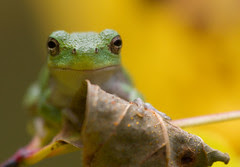 Posted by Unknown at 8:22 PM No comments:

Up past your eyeballs...

I spent the day immersed in alluvial sand and gravel today. Previewing a potential stop for a GSA field trip and brainstorming about fluvial processes.

Posted by Unknown at 9:33 PM No comments:

The peppers are plenty ripe at the farmers market. If my hot peppers don't turn out, I may have to get some. 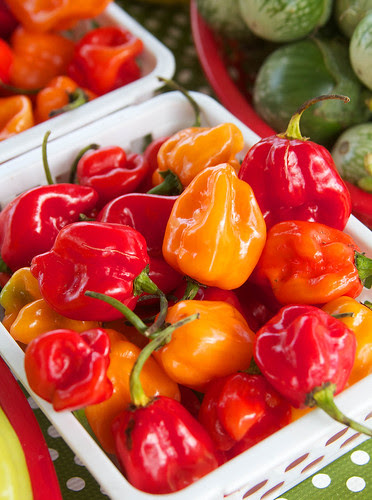 Posted by Unknown at 1:34 PM No comments:

Things I have Learned

I learned something this last week: monarch caterpillars fluoresce under ultraviolet light. I will have to explore this in greater detail... 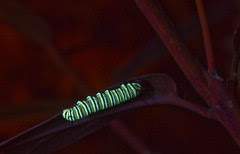 Posted by Unknown at 1:30 PM No comments:

So the theme this month is "Sexy Geology."

For all my research in fluvial systems as a sedimentologist, stratigrapher and paleontologist, there's just something about mountains. They make me go weak in the knees.

This summer brought me to Glacier, National Park. A fitting place, because it was one of those places I remembered hearing about way back as an undergraduate (sometime in the early Holocene). Here's a scan of my class notes (yes, I still have my freshman year Intro Geology Notes - don't you?). 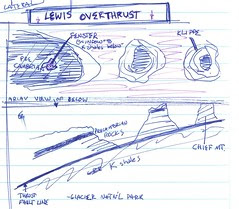 And because a good field geologist always sketches what is in front of their eyes, here's a new sketch. Made standing next to the campsite bathrooms at St Mary campground: 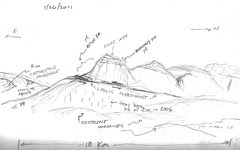