this space intentionally left blank
Posted by Matt Kuchta at 8:44 PM No comments:

When I was an undergraduate and even a little bit in grad school, my classmates and I had a fairly common reaction to the idea of Plate Tectonics. "Well yeah, everyone knows that" we would say - typically in our heads, or to each other. It was obvious to us that the earth's crust was a dynamic place and not some static shell surrounding an inner maelstrom of molten rock and fire. 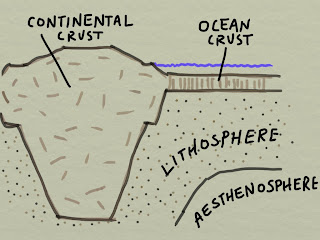 What I didn't really appreciate at the time was that no, not everyone did "know" that just a generation before. The concept of continents drifting apart has been around for at least a hundred years, but it wasn't until Vine and Matthews published their findings on seafloor magnetism 50 years ago this week that continental drift had a solid causal mechanism that many geologists could point to and say "this is direct evidence that continents have been moving." The unifying theory (if there is such a thing) of geology is younger than evolution, the germ theory of disease, younger than quantum mechanics.

I think it's important to mention that "continental drift" and "plate tectonics" are not exactly the same thing. Continental Drift dates to at least Wegener's time (~1912) and just describes the fact that the continents were once connected and had since drifted apart. Plate Tectonics is the conceptual super-structure that contains the movement of the continents plus the distribution, location, and behavior of the entire crust (earthquakes, volcanoes, mountain belts, basins, continental shelves, sea level, etc.) It's a structure that has many individual bricks. Some of these bricks have been laid down for more than a hundred years, while other bricks are still being molded and formed today. 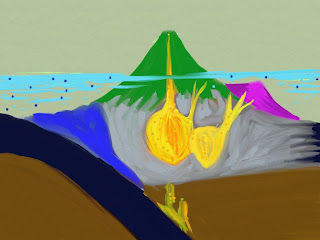 While we celebrate the 50th anniversary of a (literally) groundbreaking publication, it's easy to focus on this one event. But that doesn't mean the theory of plate tectonics was invented from whole cloth right then. Vine and Matthews didn't even really fully comprehend what their data implied. It took the realization by many other scientists to fit this seafloor magnetism data with other lines of converging evidence. Wegner's method of fitting continental margins back together like pieces from a jigsaw puzzle, terrestrial fossils and rocks of similar types on separate continents, seafloor bathymetry surveys showing mid-ocean ridges and seamounts, earthquake distribution and depth along continental margins and along mid-ocean ridges... all of these were parts of the whole. While the picture is still there even if you take out a few pieces, combined together is when they form a complete picture.

I had the opportunity to work with Reid Bryson, an emeritus professor of meteorology, while I was a graduate student. He was serving as a scientist with the military during World War II and helped predict the existence of the Jet Stream (he also has an interesting history in climatology that I should talk about some time). After his military service, he wound up working at the University of Wisconsin - Madison. His description of the people coming in to the science building and giving lectures on continental drift was fascinating. Particularly his description of the faculty that embraced these new data as supporting tectonic theory compared to his description of faculty who dismissed tectonic theory in favor of other ideas (such as the "geosyncline"). Even for someone who was "there," it became as much about the younger scientists embracing a new idea and eschewing an established one that was favored by the elders. Even for scientists, it's hard to shake that narrative that the theory you like best bestows on you some mark of distinction that makes you smarter than your peers who do not hold to that theory.

That doesn't mean geologists were groping about blindly in a cave prior to 1963. Our current understanding of Tectonics is most certainly better than it was 51 years ago. But it's still not exactly right. We will continue "breaking rocks," because it is in our nature to understand. We can't not look to see what new ideas will be revealed inside the next boulder or what our view will be when we reach the next ridge. By the time we think we know all there is to know about Tectonic theory, the cracks that have inevitably developed in our ideas will compel us to rebuild those sections with something better. 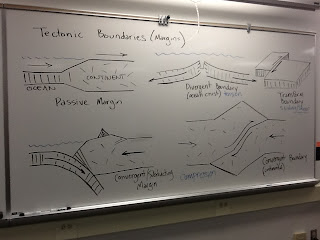 Posted by Matt Kuchta at 8:52 AM No comments: