So what are YOU doing this weekend?

I'm going to be participating at CONvergence - a science fiction and fantasy with associated skeptic/science panels. This is my first generic Science Fiction type convention. I've done Star Trek once. GSA is really like a giant geology convention. This will be interesting.

Since I'm apparently the type who can't do anything halfway, I'm going to be talking on three panels. The first will be thursday at 3:30 where I get to hang out with a bunch of authors (including the always metasomatic Kelly McCullough) and pretend I know something about literature and fantasy maps. Friday morning I get to do a bunch of Magnet demos with Matt Lowry (from Skeptical Teacher). And then, if that weren't enough, I'm on a panel with PZ Myers and Greg Laden, talking about evolution.

I'm not sure exactly how I managed to land on that last panel. I feel like I'm far too mild mannered a rookie to share panel space with Paul and Greg. At least that's my reaction right now.


I think this quote by Kelly McCullough sums up the general state of pre-planning involved: "I'm bringing caffeine, alcohol, and pants. The rest isn't really planned."
Posted by Unknown at 6:17 PM 1 comment:

Email ThisBlogThis!Share to TwitterShare to FacebookShare to Pinterest
Labels: convergence

I've been racking my brain to think of my favorite geology word. Thing is, geology is a great science for people who like words. We've got all sorts of words.

But, I think I'm going to have to go with "bioturbated" for my wedge post. It's got lots of great implications. In the geologic sense, "bioturbation" occurs when living organisms burrow/crawl/move through sediments, thereby disturbing whatever primary structures were present. I mentioned it last year, too.

I particularly like reference to one particular type of bioturbation. Dinosaur footprints. These prints can sometimes be found all over in Mesozoic rocks - enough of them that it is sometimes referred to as "Dinoturbation." 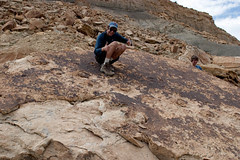 Of course, bioturbation need not be preserved in rock to be interesting. Gophers and moles are excellent bioturbators: 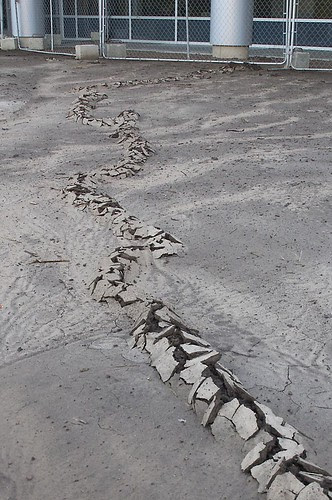 Perhaps some day in the distant future our descendants (or the sentient offspring of some surviving taxonomic group) will have their version of geologists. If the term survives, these geologists might mark the tiny sliver of geologic time that some refer to as the "Anthropocene" by noting extensive bioturbation due to activities by a particularly industrious species of ape. We may not be the most extensive agents of bioturbation in Earth history, but we're doing a pretty good job.

UPDATE: Just noticed that this was my 300th post. I don't know if there's anything special, but I kind of like the idea that this reaches the even century mark for the 3rd time.
Posted by Unknown at 4:44 PM No comments:

One good thing about soil drying ovens - they're large enough to fit gloves, socks and tennis shoes should you decide to run out and grab a sample from a swamp. In the rain. 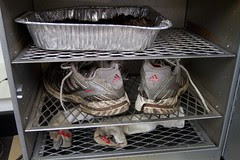 Posted by Unknown at 9:46 AM No comments:

Thurs-Demo: The one on Friday (for the hydrologists)

Where did June go? I swear I put it here somewhere...

Things have been busy. Summer research began in full swing about three weeks ago. At the end of the semester, my wonderful wife was bemoaning the lack of a cheap and simple water level indicator. She's teaching a wetland ecology course this summer, and she wants to install some small monitoring wells (piezometers) to have her students obtain groundwater (not surface water) samples and compare plant communities to the water chemistry for different wetlands (fens, bogs, etc.).

I took this as a challenge. I love solving research problems by cobbling together bits of hardware and random junk. This kind of bailing wire and chewing gum tinkering brings out my inner MacGyver. So I was poking around my lab and realized that one of the busted "moisture meters" I grabbed from a garden store might work. The moisture meter is probably worth its own blog post - but I threw together a quick video to describe what I was doing. The production value is pretty low here: I went for speed, not quality...