Another great thing this year was getting to go to New Orleans and talk to a bunch of Middle and High School students about science. I gave a 6 minute talk about "sand" and got to talk with a bunch of motivated students.

There's something special about those three red letters and the little orange mic that makes a person feel like they're giving a "real" talk. 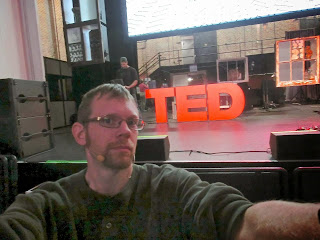 I'm glad my shoes matched my shirt - otherwise it would have looked like I was just this hawaiian-shirt clad torso.

I also gave students instructions on proper hand-lens technique. Remember folks, hold the lens to your eye and bring the object into focus.

My trip was made more interesting by the fact that I had one of the worst head colds in my life right before I left. I could barely talk and my head was so stuffy it sounded like I was talking to people inside a diving helmet that had been filled with jell-o. But I managed to get enough rest and got through my talk and survived the first intermission talking to students - my voice totally gave out during the second intermission - which was too bad. I wish I could have talked to more kids about geology. But the table next to me had enough cool whale parts to keep kids entertained far better than I could with a few rocks and bags of sand. 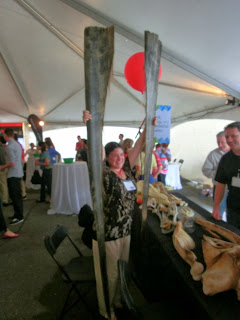 Anatomist Joy Reidenberg with her table of whale parts. Those are 8' long sheets of baleen (blue whale I think) 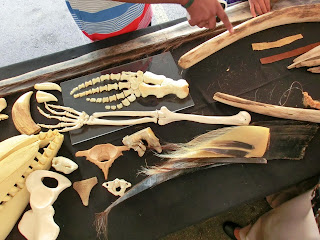 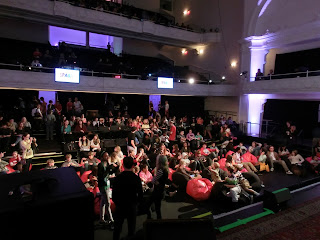 Big crowd at the Civi Theater. Those screens on the balcony ledge were there so we could see our slides without turning our backs to the audience. The red light between them showed how much time was left. 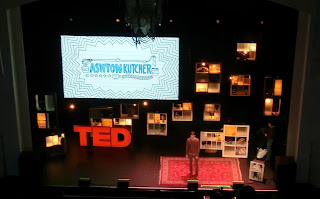 Did I mention that Ashton Kutcher was the secret guest speaker?

That's some Bass! from Matt Kuchta on Vimeo.

16-year-old DJ Cole Plante's presentation came with plenty of low frequency rhythm. Here's a water bottle sitting next to one of the balcony lights. The waves were generated by the bass line of Cole's music mix.

I had a blast - thanks to the TED team for making it fun for those presenting. I got to meet physics blogger Rhett Allain, share a cab ride from the airport with robot scientist James McLurkin, talk photography with Jonathan Mannion, and share a cab ride back to the airport with the head of Pixar's Research Group. There were several "kids" that gave talks, too - although "young adult" really is appropriate here. I can't imagine what it's like to be 14 years old and get national recognition for the transformative/innovative things they've already done (in some cases since they were eight).
Posted by Unknown at 10:55 AM