I hope you've had a chance to look at a map of Middle Earth. There is a lot going on - the landscape was formed by the need of Tolkien's narrative. Tolkien was a linguist, not a geologist. But he based his descriptions on the places he knew. So his landscape draws on the same geologic history that formed our own world. 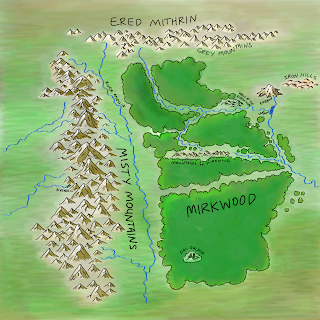 In the map above, we see three main features. On the western edge of the map is the long range of the Misty Mountains (they extend further north and south beyond this sketch). To the North lies the Ered Mithrin, or the Grey Mountains. East of the Misty Mountains lies Mirkwood - a large expanse of oak and beech forest. Incidentally, much of the plot for the Hobbit movies comes from the appendices of The Lord of the Rings and the Silmarillion. Although the plot for the movies doesn't really "follow" these sources as it uses them for general plot-directions for Peter Jackson's story. If you watch Peter Jackson's films with this in mind, you'll be much happier. But I digress...

Physiographically the Misty Mountains and the Ered Mithrin form long, linear topographic highs. These kinds of features are often indicative of tectonic stresses distributed over a large area. On earth, "active" tectonic boundaries tend to have these features. The stresses caused by one plate interacting with another deform the rocks along those boundaries. It's not unreasonable to think that the Misty Mountains indicate such a feature. 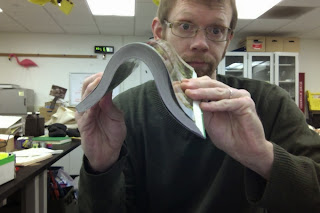 Since the Misty Mountains are oriented North-South, we can reasonably assume the stress is coming from East-West. And since we have uplift (mountains), we probably are seeing the crust thickening at this boundary, such as happens when two plates converge on each other like India and Asia. If they were pulling away, we would see thinning of the crust - and perhaps a rift valley or three like we see in East Africa and the Arabian Peninsula. 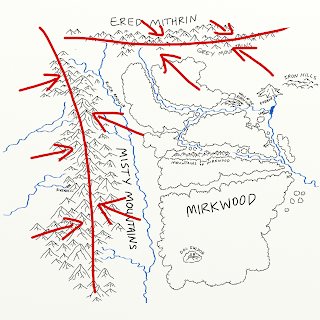 Perhaps - this could work, but maybe we should look earlier in time. It might be that an answer lies not with the most immediate pattern, but one formed earlier. Like the way you have a knotted ball of yarn and you can't undo the second-to-last knot until after you've undone some earlier, deeper knots.