The warm weather this weekend has produced a fascinating effect on the snow coming off the roof of the student center.

I had the camera set to create an "HDR" image, so that's why it looks a little funky. I kept it, since it shows the structures in the snow rather well. Some nice folds, some inclined folds, and some interesting curling.

Some of the snow has curled around into a complete spiral.

The process represents a balance between gravity pulling the snow down and the friction of the snow on the roof (so that it doesn't all come sliding down at once, or not move at all), plus the interaction between gravity and the internal strength of the snow/ice. Too week and the snow will just fall off the edge of the roof. Too strong and the snow won't deflect enough to produce the curl. 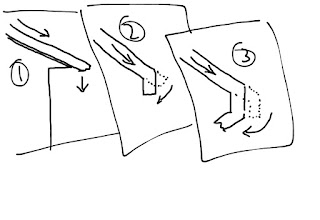 I don't remember seeing a curl so extreme that it's rotated back on itself in a spiral. Very cool. I wish I had a time lapse video of its formation/movement.