A sidelong glance at Earth's crust

I've been working on relatively accurate sketches of the earth's crust to use in my lectures. Many times, our temptation is to use speed and generalizations to do something like this: 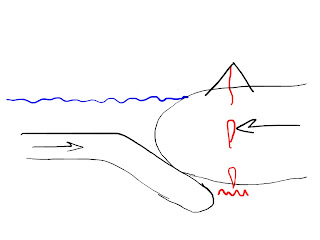 But this is quite far from an accurate representation. For one thing, ocean crust is only about 7 km thick, while continental crust near passive margins is at least 20 km thick. Along convergent boundaries where the crust is being thickened, it could be 50 or 60 km thick. Then there's the fact that the average depth of the ocean is about 3.5-4 km deep and the tallest mountains on Earth max out at almost 9 km. As a general characteristic, for every kilometer in elevation, the crust increases its total thickness by about 6 km.

Consider also that the average elevation of the Tibetan Plateau's is about 4.5 km, which means that the top of this 20 – 60 km thick continental crust projects around 4 to 12 km above the top of the ocean crust. Leaving a good ten, twenty, fifty or more km worth of continental crust to poke down into the upper mantle. To a proper vertical scale, the relationships would look more like this (although the lithosphere is just kind of thrown in there without much consideration for it's 100 km thickness...): 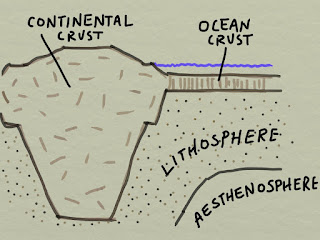 The horizontal scale in this sketch, however, is greatly compressed. The continental shelf, which may be upwards of 100km wide, is only about as wide as the ocean crust is thick (7 km), so the overall vertical exaggeration is probably about 14x "normal." This is still somewhat ungainly despite being reasonably accurate. But here's a slightly modified version:

The ratio of elevation to total thickness is about 1:4 and I've exaggerated the surface elevation changes more than the underside of the crust. Although at ~10x vertical exaggeration, the angle of subduction as drawn is probably too shallow (unless you're a fan of Laramide-style crustal thickening).

Next step is to try and see how this shorthand lends itself to drawing continental collisions...