Art for the Geoscientist 1: Students, Please be Seated

Okay, this is never going to get done if I don't do it. I've mentioned it before, and a few of you have actually left positive feedback about the idea. So here we go:

Art for the Geoscientist, Lesson 1A: How to Draw a Rock

Attendance is not mandatory, nor will I keep track. But if you're interested in following along, you will need a few simple items: 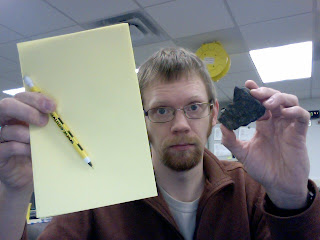 The first step is a simple one. We're going to draw a rock. Any reasonably sized rock will do. And we're not going to do anything fancy. The goal of the first part of the first lesson is just to get you loosened up and comfortable with making marks on the paper. Find a comfortable chair at a desk, or grab a conveniently sized clipboard. One more thing: Fold each half sheet of paper in half again so that it's only 4.5 inches tall by 5.5 inches wide.

Sketch 1: Place the rock a few feet away from you and draw the rock as it looks in front of you. Do not allow yourself more than 2 minutes. Now flip the paper to the other side.

Sketch 2: Draw the rock again, but this time you should do two things. First, DO NOT lift the pencil from the paper's surface. The graphite should always be in contact with the page, making marks. And rather than trying to draw all of the features of the rocks you see, focus on just drawing the outline of the rock. Again, don't take more than two minutes. Unfold the paper and fold it back on itself so the two previous sketches are on the inside of the fold facing each other.

Sketch 3: Draw the rock one more time, but now only focus on the space that the rock occupies - DO NOT outline the rock at all - no thinking about edges! Fill in the "space" occupied by the rock itself - this is where a slightly dull or thicker pencil comes in handy. Try to keep your pencil on the paper, but if you need to lift it up, that's okay for now. After two minutes, put down your pencil. Flip the sheet over.

Sketch 4: Now, focus on light and shadow. Break the rock into areas of lighter or darker parts and use the pencil to darken the shaded areas and leave the lighter areas with less (or no) marking. Just focus on blocking in areas that are lighter or darker than others. After two minutes, grab another half sheet of paper.

Sketch 5: For the last part of the exercise, draw the rock as you see it in front of you again. This time, pay attention to the outline of the rock, the "space" the rock occupies, and the areas of light and dark. Don't focus on one aspect of outline, space, or shading more than the others. Give yourself up to 5 minutes for this sketch. When you are done, set your pencil down.

There, that's it for now. I'll give you some time to try it out and if you're interested, you can post your results on the "refrigerator" in the comments below. I've got to go give a lecture about the rock cycle, so I'll be back later this afternoon with my own results. Have fun!

Okay, here's my take. I have to be honest and say that I took a little longer than the suggested time, as my still-life skills are a little rusty. 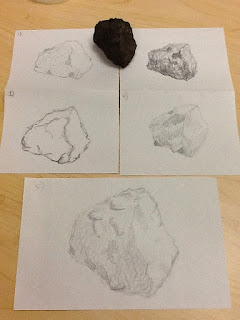