A Salute to tectonics

This week, I made a somewhat flippant twitter comment about "back arc" basins being filled with pixie dust and unicorns. I appear to have touched a nerve, because a few of my fellow geologists on twitter (geotweeps) asked me if I was being critical of back arc basin development in general. Not really - but to give everyone more context than can be obtained in 140 characters, lemme 'splain...

I've been reviewing some of the tectonic literature to improve the content of my introductory geology lectures and as part of a set of upcoming blog entries. I had been looking at the development of convergent plate margins like you might find along the western edge of South America, or along the northwest coast of the US. In an introductory class, we generally focus on a simple model for subducting ocean crust, like the picture below. 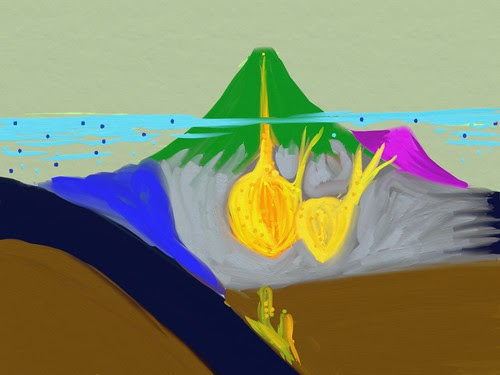 You can see the dark blue ocean crust on the left being pushed downward and being overridden by the gray/light blue continental/transitional crust on the right. Fluids transported into the higher temperature mantle allow for partial melting of the surrounding rocks (forming blobs of yellow melt rising to form volcanoes in the picture). These melts mix with continental crust, fractionate, and interact with the surrounding rocks to produce really cool geology (and concentrate economically important elements).

But this picture isn't the whole story. The Earth's crust is a much more complex system, and subducting ocean crust can sometimes lead to stretching, upwelling aesthenosphere, or extension of the overriding crust. This can lead to smallish scale rifting behind the zone of subduction. The low area is referred to as a back arc basin, because it forms "in back" of the arc caused by subduction.

My off-hand comment was that due to their apparently contradictory behavior (local extension in an area of contraction/compression) they may as well be filled with pixie dust and unicorns. Not that I don't accept the observations of modern plate motions and bathymetry, but rather that "back arc basin" has sometimes become shorthand for any complex sequence of rocks and structures that were difficult to interpret. As a graduate student, it was tempting to wave one's arms and appeal to the back arc as a quick way of providing an "answer." It was more of a cautionary metaphor, than a dismissal of a particular set of tectonic models

I've been dabbling with "Art Rage," a painting app for the iPad that I'm really enjoying. The island arc above was sketched out with that program. I also made a painting as my interpretation of these "magic" basins (the yellow dots are depositing pixie dust): 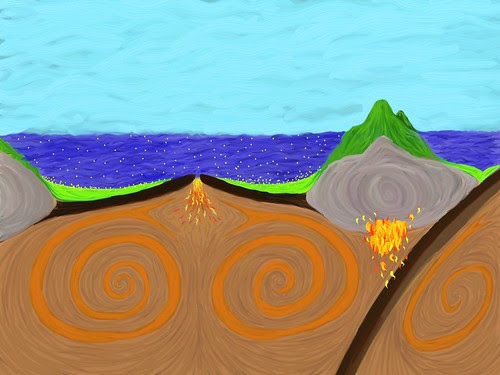 As a bit of a preview, I'm trying to summarize tectonics in terms of paintings, sketches, and photos because it's a good way to draw non-geologists into the big ideas of tectonics and because I'm playing around with the possibilities of using fantasy as a hook to get people to learn a little science. 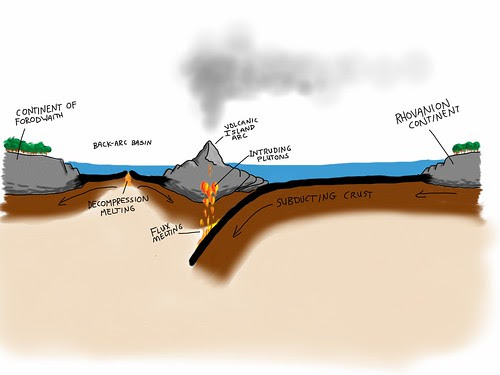 So my tweet about unicorns and pixie dust was also an obtuse reference to imaginary lands and realms of dragons and elves. Begging the question, does Middle Earth have a tectonic history?