Sketching the Crust some more

Okay, I'm relatively pleased with the appearance of the continental/ocean crust. Working on continental collisions is another thing. There are many temptations/shortcuts that are generally wrong - some more wrong than others.

Here's a draft of what I'm working on now: 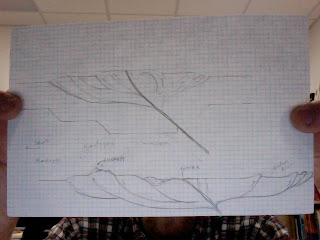 Challenges abound since the crust is flying around in just about every direction. And one of the most prominent examples of a modern continental collision - the Himalayas - differ from just about everyone's diagrams because the highest peaks are much further out from the suture between the two continents than implied by textbook figures. Is that because the Himalayas are unique? Or because the geologic shorthand in the diagrams isn't sufficiently accurate?
Posted by Unknown at 8:37 AM