Thurs-Demo: The One There's Always Room For

So, how do you show students the effects of deformation on various materials? How do you show the accumulation of strain, or the propagation of sound waves through solid rock? You can do it in real time with some polarized filters and gelatin.

Here's a picture of our setup: 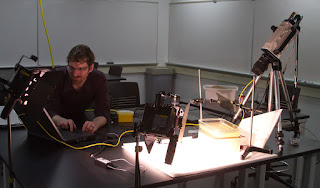 We had the bright lights up so we could get some high speed footage. That also meant the gelatin started to melt, so we were limited to about half an hour of shooting. 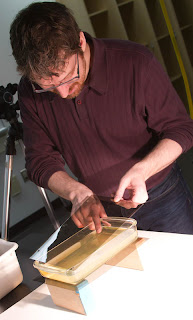 Here's one of the high-speed shots. I dropped a steel ball onto the gelatin. You can see the "goopy" behavior of the stuff along the top edge as well as the initial deformation followed by the surface waves radiating outward from the impact.

Now for some slicing up with a knife. I like the little "shocks" that radiate outward as I dragged the knife through the stuff.


Those of you who consider yourselves "strain junkies" (yes, I'm making that a term) may be wanting some more detailed information about what's going on from a mechanical perspective. I think my colleague Todd, over at Talking Physics is planning on a more detailed discussion of the mechanics of Jello...
Posted by Unknown at 1:04 PM