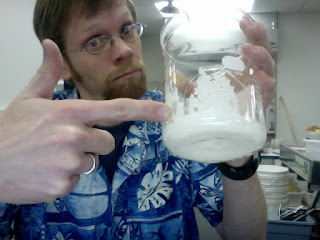 I was trying to make large borax crystals for a lab/demo involving crystallization. What I ended up doing was cracking a 1000mL beaker. Not because of temperature extremes. I think it cracked because the borax crystals were pushing on the sides of the beaker as they formed (out of saturated solution). Oops. Now I have a slight mess to clean up because there was probably another 500mL of water that ended up leaking out of the cracked beaker.

But, the experiment wasn't a total loss. While I don't have much to add in the way of a crystallization demo, I now have a way to demonstrate what salt does when it crystallizes in small cracks and spaces within rock, concrete, etc. As the crystals form, the individual atoms try to get onto the crystal lattice and sometimes they'll push things out of the way so the crystal lattice can form. If that thing being pushed out of the way is weak enough, the forming lattice might break stuff. In this case it was the beaker. In the case of concrete and asphalt, the salt spread on ice to melt the ice comes out of solution as the water dries up. Those salt crystals grow and start pushing on cracks and spaces in the concrete, causing pieces of the roadway to break apart. In rock, salts from weathering minerals can help bust the large rock into smaller ones.

This process, called "Salt Wedging" is under appreciated as a source of physical weathering. It's not the chemical reaction of the salt with the rock, but rather the physical stress the growing crystal applies to the surrounding rock. Or, in this case, beaker... now I have to go get a mop.
Posted by Unknown at 1:47 PM