Most of us that teach introductory geology tend to paint mafic (basaltic) shield volcanoes with a broad brush. Particularly when it comes to the risks they pose. Perhaps this is because the most active volcano in the world (and most often cited example of basaltic lava) is for the most part happy to belch out orange-red flows of lava that glide (relatively) quietly toward the ocean.

This was more or less the case back in early 2011 when I was there: 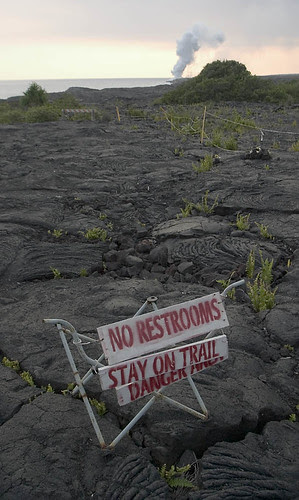 If you look closely at these fresh fields of brand new rock, darker than asphalt, you may see hints of pavement underneath. The "field" over which the lava is flowing was once a happy little community, the Royal Gardens, which came complete with general stores and houses and neighbors. Until the most recent activity at Kilauea (since about 1984), which had wiped out almost all of the houses surrounding Jack Thompson's property. Leigh from Hawaiian Lava Daily has posted an amazing set of photos that record the (likely) final evacuation of Jack Thompson, whose house has finally been claimed by the volcano.

As a teacher, it's the personal stories, directly linked to our geologically active planet that I look for in order to capture the attention of my students. Most of them aren't inherently interested in the differences in magnesium content between different basalts. But may of them are interested in how people are directly affected by these events. Events that are part of the fundamental earth-shaping processes of tectonics, hot spots, and mafic magma. For those of us that talk about these "quiet" eruptions every semester, it's a good reminder that any change to the earth's surface brings with it risk.
Posted by Unknown at 8:19 AM