mnemonic for an XKCD comic

So, according to the comic, the creator of the always entertaining XKCD comic never learned a good mnemonic for the geologic periods. That's too bad. Perhaps we can help him. Here are the ones I use:

Can Oscar See Down My Pants Pockets? Two Jasons Can Pick Noses.

And for those of you who take the time to split of the Paleogene/Neogene (nee Tertiary) into epochs: Say it as one word (PEOMPPH)

And to keep the "P" epochs organized, "paleo" means old, so that one goes first, while the Pleistocene is often used synonymously with "Ice Age" and that was just before the Holocene. Of course, most of us who have been to a GSA meeting also have a handy pocket timescale (or something a little more substantial): 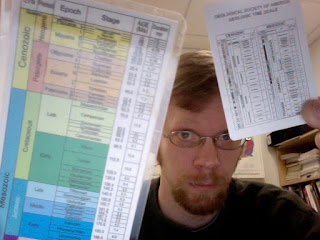 So, what's yours trick to remembering geologic time units? Perhaps we can send XKCD some suggestions...
Posted by Unknown at 10:08 AM