A review and call reversal from the line judge

An astute reader noticed that my geology photo from a few weeks ago was probably misidentified. I was looking at a top-down satellite image of the Big Island of Hawai'i and trying to extrapolate which peaks I was looking at in this picture:

I had originally identified them as Mauna Loa, Mauna Kea, and Kohala. However, one reader questioned my original ID. And after looking more carefully (and not early in the morning before I had coffee), I had to agree with MacLaren that I had Mauna Kea and Mauna Loa switched. Then the reader suggested I was actually seeing Hualalai and not Kohala. I looked at the geometry of the image and from the satellite photo I wasn't 100% sure of that. So I went to the ultimate arbiter of what one can see from a particular spot: Google Earth. And sure enough, MacLaren was spot on: 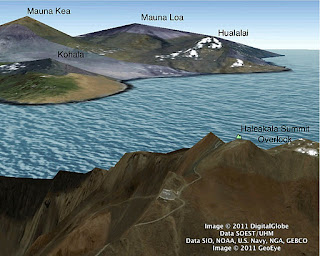 I guess the moral of the story is this: double check your geographic reference points - using Google Earth can be very helpful - and welcome suggestions from readers. I probably wouldn't have noticed my error until much later without MacLaren's suggestions. Thanks :)
Posted by Unknown at 10:01 AM