Following up with the quick video from yesterday, I decided to try and draw with the laser pointer. The fading glow of the BBs would give me a guide so that I could draw a second picture a little different from the first. And so on... stacking a whole bunch of still pictures together, I made a short stop-animation movie as a result. Nothing terribly complex yet, I'm still getting the hang of the process. 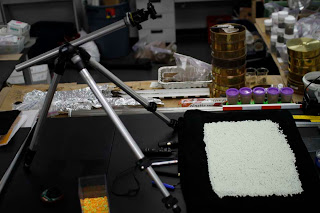 And here are a couple of finished animations. Incidentally, this is kind of like how old vacuum tube television sets worked. An electron "gun" at the back of the set would hit a bunch of phosphorescent spots on a glass screen and light them up. They'd emit red, green, or blue light and a whole bunch of dots together would make an image. A whole bunch of images played at about 30 frames per second would create the illusion of movement.

Email ThisBlogThis!Share to TwitterShare to FacebookShare to Pinterest
Labels: painting with light