Thurs-Demo: The one with Terraces

Part of my research deals with the history of rivers. Well, a few rivers in particular, but they are an example of how the landforms associated with rivers and streams can tell us about past changes to the river system. Terraces are one of my favorite. Terraces reflect periods of transition for the river system. Periods when something happened - whether it be tectonics, climate, or changes in the base level (lowest point) terraces mark a change from a stream that is relatively "stable" to a stream that is able to erode down into its floodplain.

Callan, over at Mountain Beltway, had a post about terraces last year. The picture below shows some of the work I'm doing along the Red Cedar River - a tributary of the Chippewa River - which itself is a tributary of the Mississippi River. 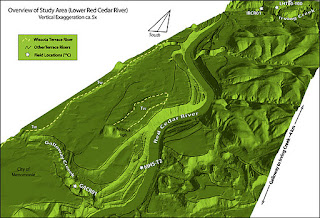 Depending on how picky I feel like being, I count over six terrace levels - possibly as many as ten. One of the questions I'd really like to answer is "how did these terraces form?" Did they form as a result of changes in sediment supply? Cutting off sediment supply (or increasing water discharge) allows the stream to pick up sediment along the floodplain and erode downwards. Or base level drop? A drop in the main stream would lower the mouth of the tributary. This would increase the slope of the stream locally. Increased stream flow would increase erosion. I've sketched out the two most likely scenarios for the Red Cedar below (I'm ruling out tectonics for now, but isostatic readjustment as a result of glacial retreat may play a role).

It's important to note that these terraces may not be synchronous - depending on the rate of erosion, one part of the terrace may form much later than another. Also, the direction that the terrace develops is different. With sediment supply, the erosion starts upstream and progresses downstream. By contrast, a drop in base level occurs at the mouth first and erosion progresses upstream.

This is rather an abstract concept. It's hard to intuitively understand these processes. That's where the Emriver model comes in. By manipulating the system, it becomes easier to see what's going on. But how well does the Emriver replicate these terrace forming processes? Pretty good, actually. Here's a video where I managed to alter sediment supply (by limiting the sediment mobilized upstream) and dropping the standpipe to simulate a fall in base level. Pay close attention to the direction that the incision propagates.