Guess what? Today is the release date for Broken Blade, a new fantasy series written by my good pal Kelly McCullough. Having read the beta versions, I can say that if you enjoy fantasy novels and film noir, you'll enjoy these books.

Beyond reading the beta copy, I drew the maps used in the book. It's partly an homage to the maps in Tolkein's Hobbit and LOTR, but it's also done from the perspective of 1) A geologist who understands some aspects of how the geography of a region might evolve as a result of some underlying physical process and 2) a traveler or map-maker living in this fictional world, trying to convey what it's like to "be there."

I started with a fairly simple sketch map that Kelly drew up as he was outlining the story. From this, I drew a pencil & pen sketch of how I thought it should look. I scanned this map into the computer so I could adjust things in Photoshop - it's much easier to add text, move mountains (literally), and prep the map for publication as a digital image. Several years ago, I drew a map for a friend, and I had done everything in layers of tracing paper so I could adjust rivers, forests, etc. I much prefer the digital method. 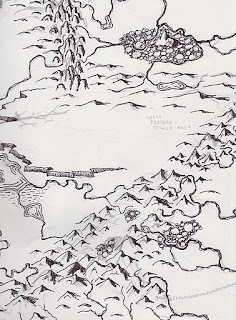 Here's a scan of part of my pen/pencil sketch. I also worked on a map of the principal city, which took Kelly's original sketch and went straight into the computer.


Before going any further with line work, I wanted to make sure that I would draw mountains, hills, and rivers that behaved in a reasonable manner. In the real world, the geography is a function of climate, underlying bedrock, and elevation. I didn't have time to draw up a geologic map, but I had both likely climatic and geologic characteristics in my head when I sketched out a rough elevation map. 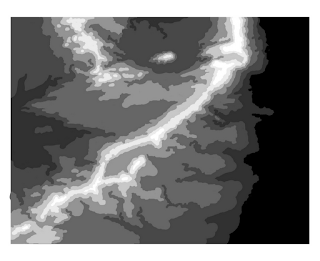 The rough elevation map: white=high elevation. This gave me a way to keep things organized - where the mountains should be, where rivers and lakes should be (so I wouldn't draw rivers that had to flow uphill)

Here's a detail that shows how I combined representations of mountains (in a semi-oblique view) with rivers. 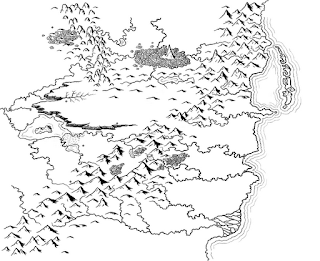 And the finished geography portion of the map. I tailored the geomorphology to have some areas with fairly young, active topography, with areas of older, more mature topography.

Then there was the need to provide place names so that people reading the story could check the map to see where they were. I tried to keep large areas of negative space so that I could place text without having to contort it too much. But this is where digital map-making really helped - I could just select and drag an entire mountain or stretch of river and drag it out of the way to accommodate text. Or I could curve text, tighten the kerning or otherwise keep the text legible (although at published size, about 3" wide, nearsighted readers may have some difficulty). 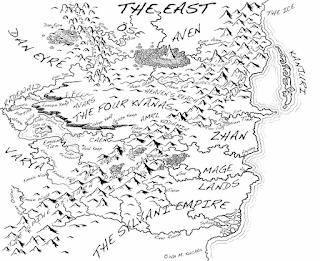 And the finished project, complete with labels. And in print, it looks even cooler (since there's an awesome story that unfolds around it).

So go get a copy! 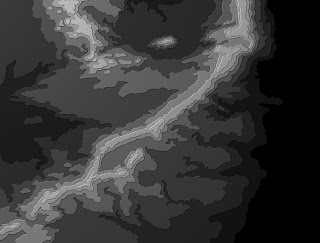