Taking it with you: A review of the Kiboko 22L camera bag

Photography is among my myriad interests, and I've managed to gather many different ways of carrying camera gear. One challenge is that much of my photography occurs while I'm out being a geologist, which means I've got to have space in my pack for a rock hammer, water, notes, sample bags, and other scientific sundries. This summer, me, my wife, and a couple of our good friends went on a three week vacation to Iceland and Scotland. I've shared a few pictures from the trip, but I've not really talked much about any particulars from the trip. Allow me then, to discuss the finer points of camera bags and travel from a geologist's perspective.

Over the years, I've used several smaller over-the-shoulder with a waist belt style bags. One I have now is a pretty decent design. It's roomy and I can toss my camera and a couple of lenses in there no problem. But to carry ALL THE THINGS, I needed a larger backpack style bag. I went so far as to pick up a used Lowe Mini-Trekker at one point, but the large access flap made it difficult to fish one particular item out without exposing the entire collection to the elements, or risk of spilling out of the bag. So I was really excited to see the design of the Kiboko 22L camera bag from Gura Gear had a butterfly style set of access flaps. Some people have found them awkward. I've found them invaluable.

So, a little bit about the bag itself. I went with the "22L+" size, which states, among other things that you can fit a whole bunch of stuff into the bag, including a 17" MacBook Pro. I didn't bring my 17" computer on the trip, but before I left I verified that yes, this giant surfboard of a computer does fit in the zipper slot behind the main bag. They also advertise room for 5 or 6 small-medium size lenses a camera flash, and a couple of camera bodies. Based on my experience, the advertised capacity for "stuff" is just about spot-on. Here's a more detailed review done by the Luminous Landscape photography blog - I don't really need to spell out features, you can read up on the architecture of the bag there.

This is how the camera bag looked the day before we left. When I got to the check-in counter at the airport, my bag was 12 kg - 2 kg over their bag limit. So I grabbed a lens and camera body and tossed them in my coat, which I was wearing at the time. That took off about 3 kg from the bag. I then took the bag off the scale, walked over to the security line and put the body and lens back in the bag. They made the rule... 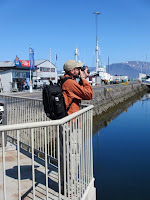 Taking in the view at Reykjavik Harbor (photo by Kelly McCullough).

Here's an interesting anecdote about the design of the bags: I was photographing fulmars and guillemots on Mainland Orkney and completely engrossed in the view, when I stopped to take my bag off my shoulders and set it on the ground, I discovered that I hadn't zipped the main flaps. So here I was, traipsing across 100-foot cliffs and bare rock with a completely unzipped camera bag! But thanks to the design, nothing fell out. The flaps stayed shut. I might have saved myself several times the cost of the bag in terms of lens repair/replacement with that stunt alone. Lesson learned. The positioning of the zipper pulls makes it easy enough to verify things are closed. 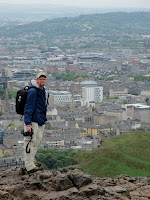 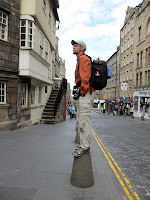 On the Royal Mile, Edinburgh Scotland (photo by Kelly McCullough)

The camera bag held up very well, allowing me to lug about 12 kg (25 lbs) of equipment around the hard cobblestone streets of Edinburgh for about six hours without getting too tired. Plus there was plenty of room to stick a water bottle and some snacks to keep going. 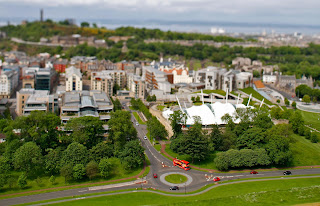 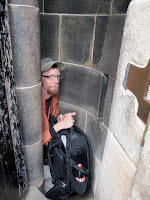 Squeezing up the stairs on the Scott Monument, Edinburgh Scotland (photo by Kelly McCullough)

It's rather big - which is great for holding gear, but made navigating tight paths a little challenging. I had to learn that I was skinnier facing forwards than sideways when I had the Kiboko on my shoulders. But the bag comfortably fit into the overhead compartment of the IcelandAir 757. I even had a short moment to check to see if it would fit underneath the seat in front of me. I was able to stash it under there, but this wouldn't likely work on airlines with less room beneath the seats.

As far as science goes, this bag is something that isn't good for carrying messy gear - all the little pockets and folds are liable to trap grit and things which would be bad for cameras and other electronics. But there's plenty of room for stashing a few well-sealed samples - the adjustable compartments make it easy to stash away a chunk of basalt or ammonite fossil, without the rocks mashing into the more fragile lenses.

Basically, it's been worth it for me. This thing isn't cheap. But if you've got a few thousand dollars worth of photo equipment (giga pans, anyone?), it's a very useful item. You can carry a tripod on the side, or bungie it to the top handle and carry it strapped to the center of the back (where it would be less off-center). Plus you've got an iPad, or laptop carrying pocket built-in. My verdict: probably not what I'm going to bring along when I'm doing grungy fieldwork - at least, I'll leave it in the van while I'm digging, then bring it out for the slightly less dirty aspects of exploration and photography. Just the kind of thing for a trip to northern Europe in the summer...

Panoramic view from the Quirang, Isle of Skye