I'm reading people's updates about GSA and miss being able to check in on everyone, especially Steve and Co. from LRRD. Fortunately, they've been updating with photos from the convention floor. While my Em2 shipped with some T-shirts, their bowling shirts are pretty sharp. Besides, Steve kind of has a "dude abides" air about him - when he's not working 80 hours a week making cool fluvial geomodels.

With all the modifications I've made to my Em2, one of the challenges I kept running into was related to discharge. While the standard electric control on the pump does a good job at keeping the pump running evenly, if you drastically change the level of water in the reservoir, you'll get big changes in the pump's output (due to the change in hydraulic gradient).

To avoid the discharge from dropping or jumping up too quickly, I went with a "constant head" tank. It's basically a tank that, once full, allows any excess to drain back to the reservoir. The water is forced out the bottom and since the height of the water column inside the central tank is constant, the water comes out at the same pressure (any extra water that would have increased the water level drains out the overflow reservoir). The pressure head is kept constant, hence - "constant head." 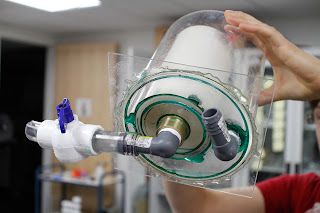 Our design is based off of one described by Thomas Hickson's "desktop delta" model. Discharge is through the elbow on the left side, while the overflow drains back to the reservoir via the outlet on the right. 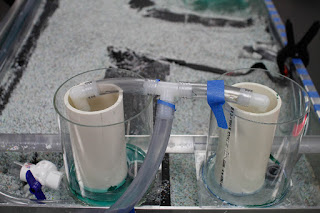 An added bonus is that I'm able to divert the pump's output into two tanks. By adjusting the discharge valves on the tanks, I can run a main stream at one rate and a tributary at a smaller one. I've got two 3' lengths of aluminum L-channel set up to support the tanks near the top of the model.

Oh, remember the notch gage I had calibrated earlier? I can calibrate the valves on the constant head tanks. Eventually I hope to make them adjustable while in operation, but for now I've just set the valve at a particular point and just kept it at that point.

Another handy detail. I can just plug up the outlet next to the constant head tank if I need to quickly shut off the flow. I can stop the flow and make measurements of the channel or whatever. When I'm done, I just remove the stopper. With the overflow redirected to the reservoir, I can keep it plugged up indefinitely. And since the pressure head is constant, the water doesn't shoot out of the end. Made of win.

UPDATE: LRRD makes an electronic flow controller, based off the Arduino open-source control boards. I bet this could be used to help limit the pump output directly, or control a solenoid to change the valve on the constant head tanks. Oh the possibilities...
Posted by Unknown at 8:24 PM