Transformative works at the intersection of art and science

Sometimes there comes a product or concept that completely transforms the way you see things. This has happened to me recently when my lab got its Emriver stream table. 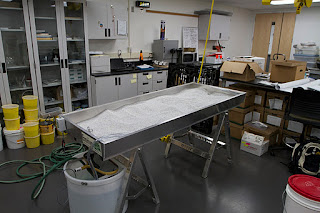 Why am I so jazzed about this thing? Well for one, it's a stream table. There's no easier way to teach and learn about stream processes than by watching a stream move sediment around. Secondly, it's the way in which Steve has chosen to implement the concept. By using ground-up melamine plastic, he has managed to address (if not completely solve) the problem of scale. And by using plastic, there isn't nearly the wear and tear on the recirculation pump, hardware, hands, floor, countertops, etc. that mineral sand would have.

In fact, by working with the plastic media, I have a whole set of plans for teaching soil mechanics with this stuff. I've shied away from some lab activities and demonstrations in the past because of the mess that real soil would cause. I've also stopped doing a few of them because the students inevitably scratch up the table tops as they drag sand around. But the ground plastic is easier to clean up, doesn't cause problems for the other folks who will use the lab room later, and by being less dense than mineral sand scales to other activities more readily as well.

This is what I mean by a transformative work. It is something that is immediately recognizable, useable, and the tools/ideas that underly its use are transferable to a wide variety of other activities. It may be a stream table, but it has already given me ideas that I can use in other courses beyond introductory geology. In fact, there is a great deal of potential simply in the aesthetics.

I brought a handheld UV flashlight to the GSA meeting (like you do) and discovered that the standard plastic media fluoresces bright blue under long wave ultraviolet light. So I set up a whole bank of 18" fluorescent UV bulbs (5 of them to start with) and started filming the stream table. Then, of course, I realized that I could place some of the fluorescent plastic BBs that I had been experimenting with earlier into the stream and watch them move down the channel. The long exposure then traces their path. Of course, I had to shoot some video:

And here we have the nub of my gist, as it were. To me, this is art. And it is also science. As an undergraduate, I majored in both Art and Geology. Part of it was my strong interest in Natural History Reconstruction (aka drawing dinosaurs). But part of it was that as a geologist, I spent as much time representing the natural world via abstraction. Most of these abstractions were intended to represent the real world, but they were themselves not the real world. Much of the work I did as an artist was informed by my interest in science. Techniques for making complex color palettes relied as much on color theory and the physics of light as they did on the aesthetics/emotional connotations of what colors I used. Photography is dependent on the optics of the light moving through lenses and the chemistry of the film (this was before cheap digital, of course) as well as the choices of subject matter, position in the frame, object of focus, etc.

To me, art and science are inextricably linked. They aren't so much two sides of the same coin, because you can deal with them at the same time. In my mind, science and art are part of the same lens. You can't use one without the other, but you can emphasize one or both. It's kind of like the whole process of learning. You can learn by having the information formally presented to you in some fashion, or you can learn by discovery. You can do both at the same time, or have one emphasized over the other.

This brings me back to the stream table. You can teach formally with this thing. You can allow people to discover and learn completely on their own. It may seem like I'm just "playing" with the Emriver system right now. But what I am doing is more complex than that. I am testing the setup. How do I need to adjust stream flow in order to achieve the best (quickest and most obvious) meandering behavior? How big an impact does a small or large adjustment in the standpipe (base level) have on the stream? How easy would it be for a small group of undergraduates to manipulate the variables or make observations about a stream system? What other activities can I do with my students using the Em2?

This isn't just "play," but joyful discovery: seeing new possibilities and creating new syntheses where none existed. Ideally, students who don't have the background I do will make their own discoveries - learning what I want but also something new. Generating a sense of excitement and accomplishment through discovery is one of my favorite parts of teaching.

Oh, and the stream table can be more than just a teaching tool. I've already got some ideas for research. Particularly as regards fossils in river deposits. For example, snail shells have a much larger hydrodynamic cross section than the sediments in the stream. These BBs are similar in that they are much easier to move despite being bigger. Where do the BBs tend to "pile up?" Are there relationships between the "facies" of plastic media (fine/course/mixed, etc) and where the BBs pile up - is this related to the fluid dynamics of the stream alone, or is it a combination of stream power and the surrounding sediment? In the field, there is a distinct connection between sedimentary facies and where we find particular fossils (or how well-preserved these fossils are). We can infer a fluvial process, but with the stream table, we can see it happen. I'm very excited about where this can go.

Do I recommend you get one? Well, if you have the funds and the space I absolutely do. But these things aren't cheap. And they do take up some space (although their storage footprint fits on a standard 4'x4' shipping pallet). But if you're limited in funds, or already have a stream table, you can still learn from the research and design done by the Emriver folks. In fact, you might be able to get parts and supplies to outfit your own system. If nothing else, go and play in a sandbox - you never know what you'll discover by playing around.
Posted by Unknown at 11:15 AM