Earlier I posted about some interesting data that I got from setting up a simple flume/channel. At first I was rather excited - maybe there was some aspect of fluid dynamics that I was seeing (flow separation, turbulence, etc.). But this is SCIENCE!, so I have to be able to do a few more things before I can do anything more than speculate.

I hooked up another accelerometer to the pump's outlet (just above the water line) and was confronted with something I expected: 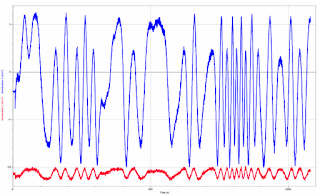 The blue line represents the accelerometer attached near the pump, and the red line is the accelerometer attached to the rain gutter flume. At first glance, it appears that the variation is all due to the pump. Changes in the blue line correspond quite directly with changes in the blue line (though smaller). As one goes up, so does the other. At this point, I was pretty convinced that the only thing I was observing in the first test was some behavior of the pump. But, correlation is not causation, so I looked at the data a little more closely: 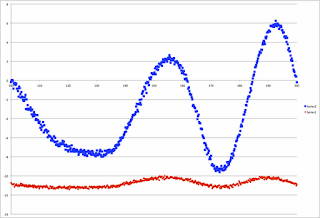 Well, nothing really new, but the shapes of each "sine wave" is not quite symmetric. So what about just one wave? 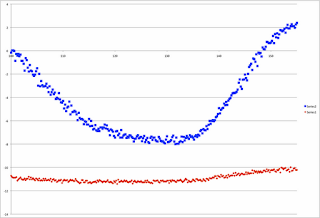 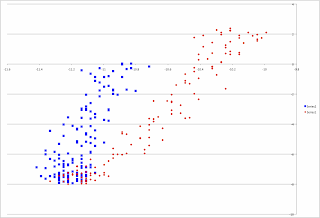 Okay, now we've got something a little more interesting than just wobbles produced by a water pump. There is clearly something more complex than a simple "change in one variable producing a change in another." You can see what look like two "clusters" of points. Changes in one variable correspond with two possible changes in another. The blue points are values from one accelerometer versus another as the values "fall" to more negative values, while the red points are values from when the values were increasing. Grabbing about 300 seconds worth of data makes this pattern even easier to see: 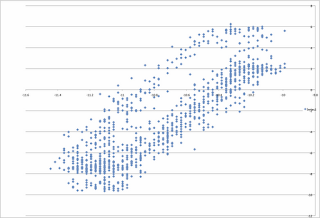 So, instead of just being some simple "noise" produced by the water pump, I've stumbled upon something a little more complex. In fact, this isn't a bad example of what's called a "non-linear" system. Specifically, I think this system is displaying "hysteresis." Where there are two possible values of a dependent variable, given one value of another. A change in the system (the water pump) causes another change (on the flume channel), but increasing changes behave differently than decreasing changes. There is complexity in the system, but it's not a complex setup. Two accelerometers dumping data to a computer, a pump, some water and a four-foot length of rain gutter is all you need.

Keep in mind, I have only begun what we could call "hypothesizing" here. I am not at a point where I could definitively point to a specific process or mechanism (beyond some kind of "change" in the water pump). Nor is this concept at the point where it goes beyond simply "explaining" a process to constructing a hypothesis that both explains observed behavior and predicts future behavior. In order to be true science, these criteria MUST be fulfilled. But I have preliminary data and observations. I have a few ideas of what might be going on.

Those of you following along at home might be aware that my treatment of the data (and hypothetical mechanisms) has been very shallow. I have not begun to really describe WHAT the accelerometers are measuring. Is it simply a subtle tilting to or away from vertical (thus increasing or decreasing the influence of gravitational acceleration)? Or is some of the acceleration coming from tiny impacts of flowing water or vibrations from the pump? And, of course, what is causing the apparent hysteresis? Is it some difference between increasing/decreasing flow and shear resistance from the water? I'm not sure, but as you can see, this stage of the study is generating lots of questions. That's good. The more questions that fall out now, the easier it will be to pull the system apart (literally and figuratively) to see what's going on. And then, perhaps, I can start to make explanations about what I'm seeing and make predictions about what I will see when I start to make additional changes. Changes like adding sediment.

Whew! That's a lot of thinking. And we haven't even begun to watch sediment transported as bedload yet. But, if you start diving into current research into papers like the one Brian Romans described, you can see what kinds of questions the researchers had to answer before they could even begin to try and account for sediment transport in streams.

So, what would you do next? Scale things up? Reduce complexity in the setup? Eliminate the pump? Why not all of them? And, of course, lets dump some sand in there, too. Keep in mind, this is "science" and if we are to truly understand this system, we must be able to both EXPLAIN what we observe, and PREDICT how the system will behave under different circumstances. Ideally, we'll be able to apply this idea to other systems (like real rivers). Or, at least, gain a better appreciation for complex behaviors.

Who's up for a little chaos theory?
Posted by Unknown at 4:36 PM