Lunatic comes from the late Latin, lunaticus. This word, as adjective or noun, pertains to being foolish, eccentric, or absurd. It stems from the ancient belief that changes in the moon caused intermittent insanity (Luna = moon). Kind of a medieval version of the "Twinkie Defense." But while changes in the moon may correlate with people acting weird (particularly those who are inclined to believe in some lunar link), there is no reason to think the moon causes this weirdness. It's in your heads, people. Erik, at the Eruptions blog, dives into this concept in great detail.

There have already been murmurings among the astrology crowd that the full moon set to arrive in a week is going to be some kind of "supermoon," capable of destroying cities, leveling whole continents to waste with earthquakes and volcanoes and über-tidal surges. Whatever. Yes, the moon's gravitational pull does cause tides. So does the sun. But connecting the moon to any specific event on Earth - especially catastrophic changes - is beyond flimsy. Imagine this: your head is Earth. Take a ping pong ball and hold it out at arm's length - this is the moon. 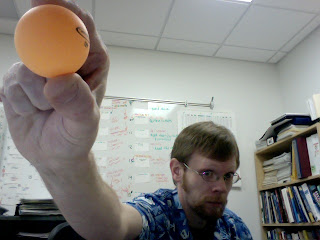 To represent the change in distance between the furthest and closest distances of the moon, just bring the "moon" one ping-pong ball closer. This is your "supermoon." Do you see any change in the size of the ping pong ball? Perhaps - and on a clear night, we may think it looks brighter than others. Is it? Or are you judging this based on the fact that the previous three weeks have been comparatively darker - we could measure the light levels and probably see an increase, but are our eyes sensitive enough to accurately detect the change? I'm not sure. But the change in gravitational force it exerts? Now we're looking at fractions of fractions (due to the difference in gravitational pull between the sides nearest and furthest from the moon).

In the head/ping pong model, the sun is going to be a 54-foot diameter sphere nearly a quarter of a mile away. Both of them are exerting a gravitational pull on the earth. But any effect on us, or a particular spot on the earth's crust will be tiny. Tectonic forces and gravitational forces exerted by Earth itself will be thousands of times greater.

There's also the temptation to link the eruptions in Hawaii to the earthquake in Japan. Or some other volcanic/earthquake event with another far across the globe. The unifying theory for all these events is Plate Tectonics. Not some mystical planetary voodoo. While far-field earthquakes can occur (New Madrid, for example), the idea that an earthquake on one side of the globe will cause volcanic eruptions on the other - or some (by gravitational standards) tiny change in orbital gravitation is posing a great risk of catastrophe is ridiculous. It's like trying to pop a zit on your forehead by clenching your buttocks.
Posted by Unknown at 10:23 AM