Is it too soon to call shenanigans?

I've been looking over some interesting earthquake science today. The first is the Nature Geoscience paper (wired.com summary here) about the statistical (and physical) lack of any evidence for major seismically "triggered" earthquakes far-afield. That is to say, a big earthquake along one plate does not appear to increase the chance for another big quake along a different boundary.

Then there's a guest blog by Christie Rowe about earthquake prediction and the unpleasant yet real situation of uncertainty.

Some of you may be familiar with the recent issue many of us in the geology community have taken with Simon Winchester's "comments" about California. 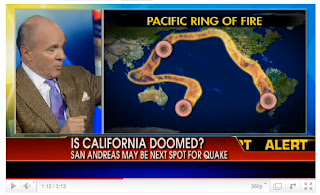 (screen cap from the Fox interview with Winchester)

Today, Donald Prothero (writing for skepticblog) has a blog post about another quake-quack, Jim Berkland. It got me wondering - are these two (Berkland and Winchester) connected? I did a quick search of "teh google" and didn't come up with anything directly linking them. Alarmists and conspiracy theorists have been buzzing about the comments both of them were making last week. They were both interviewed by Fox News. They both talk about the "four corners" of the Pacific Plate (a horse-pucky idea in the first place) and they both have undergraduate schooling in the geosciences. But I haven't found any coordinated effort between them, so it's more likely a case of convergence. 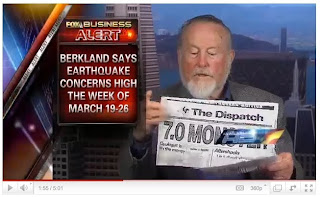 (screen cap from the Fox interview with Berkland)

This doesn't make things any less frustrating - there are real risks. There are real hazards. Arm waving and claiming persecution from mythical "powers-that-be" isn't helpful. There is nothing to suggest that either Winchester or Berkland have any real handle on the geological systems actually involved. Just an ambiguous pseudoscience of hyperbole and alarmism.
Posted by Matt Kuchta at 7:22 PM