Well that was different...

So, it's been a kind of a weird few days. My friends Kelly McCullough (cool author), his wife Laura (cool professor colleague), my wife and I headed over to a well-known author's house. Because this author had a lamppost. In the woods. And Laura and Kelly wanted their picture taken next to it. 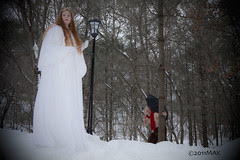 Did I mention Laura and Kelly were in costume? Yeah, they were.

The entire trip was quite surreal - the author's house is situated next to a creek. I found myself seeing two worlds. The first was my world. The landscape of my day job. House: located on a high terrace. A path descends into the stream valley and the lamppost was situated on a lower terrace overlooking the stream. The second world was full of goblins and fairies and the innumerable fey creatures that rattle around in our heads when the sun is low in the sky. As we walked down the path, I felt that we were leaving the gatehouse and crossing some great threshold to descend into a place much further removed. Having two great big white dogs, a witch, and a faun. 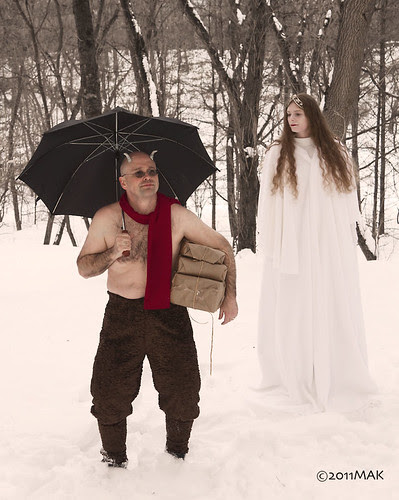 After the photo shoot, we scrambled back up to the world of terraces, stream incision and a warm kitchen where we got to chat with the owner of the lamppost. I came home, posted the images on flickr, and then pow. Thousands of people started looking at these pictures. Orders of magnitude more people than usually view my stuff. The author tweeted and then blogged about the adventures with his lamppost - I felt like I was trying to drink from some internet firehose.

I found out that his website has its 10th birthday tomorrow. I wanted to say "thank you" for the mention, the tea, and especially the lamppost. I figured that a little note would be the appropriately midwestern thing to do. He gets a lot of sand in the mail. I find this rather amusing (although his assistant certainly does not), since I often play the role of sedimentologist in real life. But I don't think he needs any real sand. So I set up my microscope and camera attachment to take a picture of "sand." Digging around, I found some garnet sand. Garnets are considered a traditional "birthstone" for websites born at this time of year. 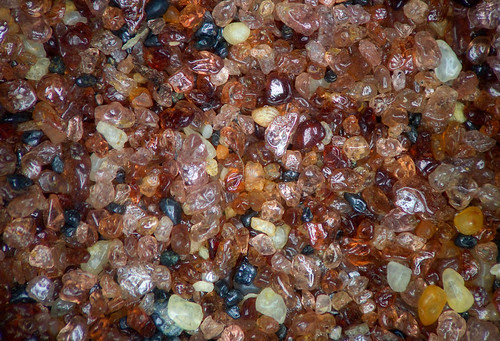