Last year my wife and I went to Hawai'i. It was fun. I'm still processing all of 2,000+ pictures I took. But Greg Laden is hosting the next "I and the Bird" and I figured this would give me a chance to talk about some evolution/biogeography concepts.

One of the reasons people go to Hawai'i is to see plants and birds you don't find on the North American continent. The state bird of Hawai'i is the Nene (pronounced "Nay-Nay"). A large, distinctive bird, it spends a lot of time walking around on land. This rare bird can be found in a few locations you could visit on the Big Island, in Haleakala Nat'l Park (Maui), and Kauai. We didn't see any any Nene while on the big island, but did see a few at Haleakala and on the north shore of Kauai.

The Nene's scientific name, Branta sandvicensis refers to Hawaii's first distinction as the "Sandwich Isles" (named by Captain Cook after the 4th Earl of Sandwich). 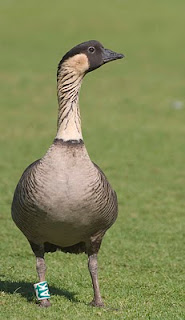 At first glance, the Nene closely resembles the Canada Goose (Branta canadensis) in size and shape:

The first difference you notice are probably the plumage and coloration differences. Pay close attention to the legs - they're a little longer and more robust in proportion. The toes, too, are better separated: less connected by webbing compared to the Canada Goose (yes, I'm capitalizing the common names - I'm doing this in order to distinguish the birds). 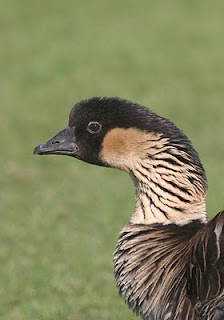 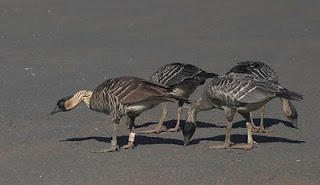 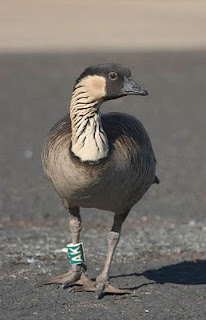 Unlike the Canada Goose, the Nene is better adapted to the terrestrial ecosystems found on Hawaii. There are no large lakes - few vast wetlands well-suited for floating and paddling around. Rather, the grasslands, wide plains, and rocky shrublands of the Hawaiian islands would hinder a more squat, short-legged, web-footed creature. 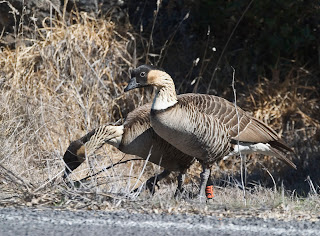 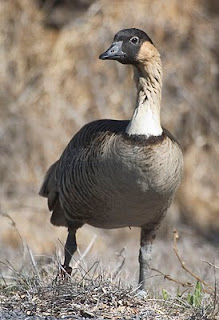 There is, however, another remarkable connection. Based on mitochondrial DNA studies, the Nene is a direct descendent of the Canada Goose. While fascinating, it's not wholly inconceivable. Canada Geese are good fliers: a population of these birds diverted from some migratory course several hundred thousand years ago probably found the (considerably younger) islands a welcome refuge from the thousands of miles of open ocean. Without an easy way to return, they were essentially stranded. Over the generations, physical characteristics better suited for life in this tropical wilderness would be selected for. These characteristics were passed on to subsequent populations. The genetics (genotype) of the Nene we se now is different - but not that much different. The set of physical characteristics (phenotype) that make the Nene unique are easy to see. But so are the similarities. Clues to a shared genetic heritage. For example, their large bodies and long necks. Suited (well enough for survival at least) for eating plant material. Long necks and stout beaks to reach down and nip the tops of grasses and pluck/crush berries from the bushes. Great big bodies can carry a long digestive tract - all the better to ferment and digest all the cellulose-rich material.

Notice I'm referring to populations here, not individuals. Individuals do not evolve. But just like you are a little different from your parents, the populations of descendent birds are going to exhibit differences from their parent populations. Given the strong similarities in the genetics of the Nene and the Canada Goose, perhaps there were more than one population of Canada Geese that found their way to the young Hawaiian islands. Or, it may be that the selection for physical characteristics was more intense than for other subtler changes that would manifest in the genotype.

Of course, being a large bird on an island without predators is nice. Minimal risk of being eaten. But with the colonization of the islands, first by polynesian islanders, then by Europeans brought with it the introduction of other animals. Dogs, rats, mongoose - all of them more than capable of making a disastrous impact on the Nene. In addition, a leading cause of mortality among Nene nowadays is being hit by cars. These amiable birds walk along roadways and parking lots - many are hit by cars.

If you'll allow a brief bit of anthropomorphization: I envision a flock of bedraggled, exhausted geese flopping onto some distant, unknown shore. After finding the place warm, full of good food, and short on big predators, it's not hard to see why populations of these:

Stuck around and evolved into populations of these: 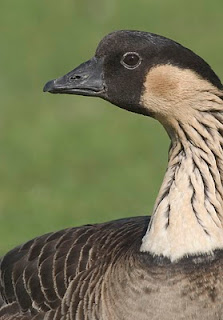 Email ThisBlogThis!Share to TwitterShare to FacebookShare to Pinterest
Labels: geese, I and the Bird, Nene, speciation