So the Accretionary Wedge (vol. XXXI) is asking for surprising geological notions. Glad he clarified, because I'm learning all sorts of things about my state's government and my fellow state employees this week (some good, some sad, some stultifying).

Let's start with the large. In this case, it's the solar system. As a child growing up, I had all sorts of astronomy and space rocket books. The Challenger disaster still sticks in my mind as the moment where I really learned about the "costs" of space exploration. Although I didn't go on to become an astronaut (I did toy with the idea for a while, though), I still study aspects of one tiny yet important blob of silicon and metal oxide hurtling around the sun.

As an exercise in perspective, I have my students map out a scale model of the solar system on our University's campus. It's about 1,000 meters from the southernmost goalpost on our (American) football field straight north along the sidewalk to the pillar next to the Clocktower (which, amusingly, has four different times displayed on each of its faces - I don't think funds to repair it will be in the budget for a while). That gives us the bounds for our model. We'll put the sun on the north end.

At the other end, we'll place Neptune. I use Pluto's reclassification as one of those "teachable moments" that explains why scientists are very particular about words. "Planet" means something specific. If we don't call other trans-neptunian objects "planets" because they lack certain qualifications, we can't simply give Pluto a special name because we like it - if it's not a planet, then it's not a planet. Words have specific meanings - and we must try as hard as we can to say what we mean (we may or may not mean what we say, but that's an issue for the Cheshire Cat and his peers).

So, we have our solar system boundaries. Sun to Neptune = 1,000 m. We could simply divide the distance between the two and then convert all the other planetary distances the same way. Or, we could use the Astronomical Unit (AU), which is the average distance between the sun and earth (about 150,000,000 km ~93,000,000 miles). This reduces really HUGE numbers into more manageable chunks (easy to do w/o a calculator). The distance from the Sun to Neptune is about 30 AU. So, 100 m/30 AU leaves us with about 33 meters per AU. So the Sun to Earth distance is 33.3m. We can just multiply 33.3 m to each planetary distance (in AU) and place each planet on the map.

We can scale the sun and planets to this model, too. The sun ends up being a little larger than a basketball. Earth is about the size of an "airsoft" BB pellet. Jupiter is a little smaller than a ping-pong ball. Now imagine holding the basketball-sun and looking down the walkway and just seeing the football field in the distance a thousand meters away. Resting on that far goal post is a marble. That marble is neptune.

Pretty cool. But it works the other way too. What if we were to take an atom of gold and scale it up so that we were holding the nucleus and the outermost electrons were on that goalpost? The nucleus would be just a little larger than a baseball. The electrons, all 79 of 'em, would be little BBs orbiting in clouds. Technically, electrons are "point" particles with no actual physical dimensions of length, width or height. 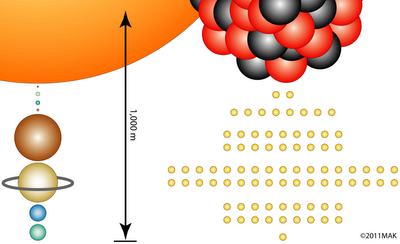 Graphical representation of object/particle sizes (distances not to scale). Click for a much larger version.

Clicking on the image will bring up an image that is about 20% larger than the model described here. That means you'll have to put Neptune about 1,200 meters away from the sun to match the size of the planet images to the distance from the sun.

And now for the mind-bending part if we tally up the mass of all the stuff in the solar system, the sun accounts for about 99.86% of the total mass in the solar system. If we tally up all the mass of the neutrons, protons (each being about the size of a marble - one inch in diameter), and electrons, the nucleus accounts for 99.98% of all this stuff. Proportionally, there's more than six times more mass outside the sun than mass outside an atomic nucleus.

There is more space in stuff than there is stuff in space*!
*For carefully measured amounts of "space." Every atom in our bodies has more empty space inside of it than can be found in our solar system.

I just find that incredibly cool and a remarkable demonstration of the vastness of space, and the tinyness of atomic particles. Trippy.
Posted by Unknown at 9:14 AM