Art and Geology: A Revised Rock Cycle for Class

Thinking about art and geology, one of the ways I most often use art and design is in the creation of diagrams and sketches for my students to organize information.

Based on Andrew Alden's suggestions, I revised the rock cycle diagram I use in my intro geology lectures. I included a few extra graphic elements to imply some of the physical appearance or fabric of the rocks themselves: 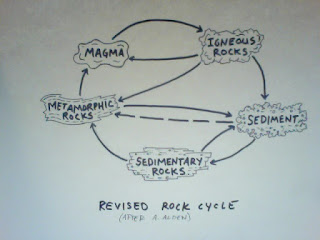 I haven't labeled the arrows (processes), but that's in part because I want my students to be able to connect the term with the specific idea. They'll get this sketch as a reference, but it's up to them to build in the added context.

I've also been working on making easy-to reproduce, simplified representations of tectonic boundaries. Real tectonic plate boundaries are very complex places, with lots of things going on. And at scale, they don't look like much, so I tend to hyper-exaggerate the proportions to make the interpretations easier. 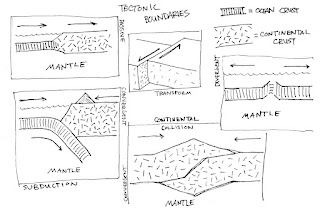 It's still a work in progress and they're only intended to show relative motion between the plates. Concepts like flux melting along a subduction zone or normal/reverse faulting along convergent boundaries are material for other, more detailed sketches.
Posted by Unknown at 11:21 AM