Testing how a remarkable picture would work

You may have seen this picture floating around the interwebs: 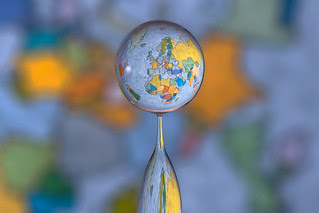 There was a blurb in gizmodo about it, but before I had seen the write-up and the photographer's amazing gallery on flickr, I was trying to figure out if it was real, or perhaps "enhanced" just a bit...

I knew that it was possible to get clear images in a drop of water - they act like little lenses, but seeing details is tricky. A reverse image search in google brought me to the source of the images and confirmation that his setup could produce a picture like the one above.

So of course, I had to try it with the high speed camera to see how easy it might be to capture as a moving image. It took a little experimenting to get the right proportions and the proper focus.


My first nearly successful attempt showed me that my image of the world was too large. Europe and Africa are easily seen, but the other continents don't really show up. On to a smaller map and this time I used just an outline so I could color the land yellow (thereby showing up green through the drop).

A few more experiments and I came pretty close:


Not nearly as "perfect" as the still image, but it shows that I'm on the right track. A few more tweaks and I bet I could get just as much detail out of the drop as the photograph.
Posted by Unknown at 2:55 PM