I've got an interesting problem. We have a very happy pair of Eastern bluebirds who are checking out the box in our yard (and probably the one in our neighbors). Apparently the male has decided that his reflection in our big living room window is a rival. So he spends quite a bit of the morning carefully eyeing our window and occasionally flying right up to the window.

This kind of behavior can be rather stressful on the bird - it wastes needless energy defending territory against an imaginary rival. There's also a chance that the bird could injure himself if he gets too enthusiastic. So I've been trying to find ways of dissuading our little blue ball of piss and vinegar from wasting his time with the window. Window clings didn't seem to work. Putting something opaque on the inside of the window wasn't very effective either. I even moved the mealworm feeder they use across the yard. But he keeps coming back. 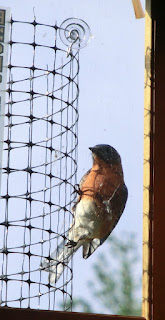 . The picture above shows the crop netting I put up. But he's found there is a spot on the side that he can still get to. But, it is keeping him from hitting the window with too much speed. I'm going to have to experiment with stretching the netting out more, but this seems to be something of a compromise.

One of the benefits of having feeders near the window is you get to see the birds. And, if you're so inclined, photograph/videotape them. The footage in the video below was taken with my own Canon 7D and two cameras from our department: a Casio Exlim ZR100, and the memrecam gx-8.

While the memrecam is a bit out of the price range for the average person (most models cost more than a family car), the Casio Exlim is pretty cheap. And the 240 fps video is pretty good. Not cinema quality, but it's perfect for seeing what the birds are up to. Or cats and dogs, people - for those of you with an interest in biomechanics, something like the Exlim might be a great research tool.
Posted by Matt Kuchta at 9:30 AM