It's been about a year since I finished the maps for my friend Kelly McCullough's new fantasy series (Book 1: Broken Blade is out!). A few weeks ago he started a line of conversation that began with "So I was looking at the map..."

I'll let you imagine all the possibilities that could arise. But apparently, I had drawn - and he had approved - placing the Ismere library too far away from the river. I can't give you any spoilers, but suffice to say that there's a key scene in book four that requires the library building to be located by the river, not just the canal (something to do with "living water," but I can't say any more than that). 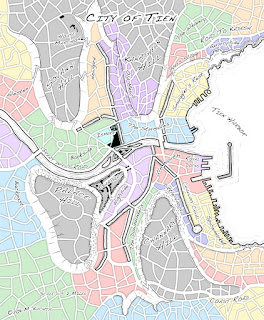 I guess Kelly had described the library as being near the river, but neither of us had really figured out the sketch had the library "away" from the river before the map was published in the first book.
Posted by Matt Kuchta at 12:03 PM