It's time for another Accretionary Wedge. This month's theme is "Deskcrops," which I had intended to use as a showcase for the weird and wacky stuff that we geologists accumulate over the years. I've seen departmental collections where the strangest things were in there. "Pebbles and Mortar" from Hadrian's Wall; flesh, bone, and adiposere (fat) from a dead rhino; 1 mL of Deuterium (heavy water); and many more strange and beautiful things.

Seeing that it's Halloween (and also my Birthday), I thought it might be neat to go Trick-Or-Treating in the geobloggers to see what I get. When I was a kid, I would split my loot into different piles. From stuff I liked, to things, like "Bit-O-Honey" that weren't really very good. Fortunately for me, all the stuff I got was great - and roughly fits into categories related to the rock cycle.

This was my costume: 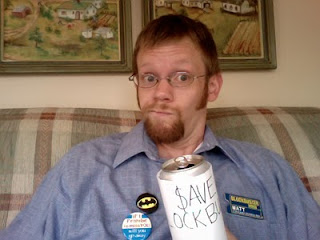 I'm going to give pride of place to my contribution: a few chunks of Trinitite: the glass made out of fused sand and rock and bits of equipment (casing, wire, etc) that formed in the explosion from the first atomic bomb. 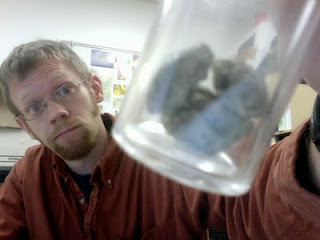 It doesn't look like much - just some greenish, glassy stuff - several vesicles, and "blobs" of melted, spherical droplets. It has a little radioactivity above background. But I did notice some interesting bits. It does have parts that fluoresce in long and short-wave UV light: 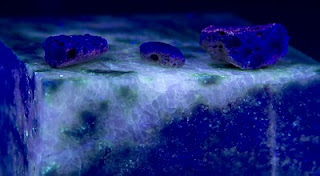 There are a few flecks of orangy things. The chunk of rock they're sitting on is also showing off some nice fluorescence. I blogged about this chunk last week.

It's under short-wave UV that the Trinitite really shines (pun intended): 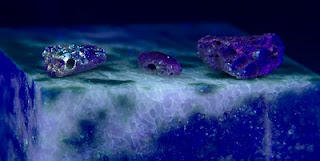 I don't know what's causing the red, orange, yellow, and white colors. It's probably a fascinating melange of stuff incorporated into, altered, or formed during the explosion.

First off, we'll go with igneous rocks. These are rocks formed by the "freezing" of molten rock. These rocks may form deep below the surface as an "intrusive," or erupted onto the surface as an "extrusive" rock (often in a dramatic volcanic eruption).

Philip at Geology Blues provided some "Lavasicles." And tells a tale of finding neat rocks hiding within an existing collection. No need to traipse around the world, just capitalize on what's at hand. Kind of like MacGyver...

Garry, the Geotripper, shows off some lovely peridotite xenoliths. And provides a keen quote to boot!

Ian from Hypo-theses, continues to blog about a rock each day. Quite a challenge. You know the post is going to be interesting when the exposition begins with a story about sitting around a bedouin campfire on the edge of the Sahara. We're treated to many photos of some kind of long-named, Norwegian pegmatite. Check out those phenocrysts!

Lockwood's blog, Outside the Interzone, gave us a neat hunk of pillow basalt. It includes the classic field photo (hammer for scale) to show its provenance. Also, not the only blog to photograph the rock with a cat for scale - there might be a theme here...

Sedimentary rocks are either "clastic," which are made of broken fragments of pre-existing material compacted, cemented, and turned to stone. Or, they are "non-clastic" - I've never been a fan of classifying something by what it's not - so I prefer the term "chemical" for the other group of sedimentary rocks that are formed by precipitation out of solution.

Anne, over at Highly Allocthonous shows off some nifty cubes of rock she uses to teach about porosity and permeability. Incidentally, my house lies about 20 feet above the Eau Claire Formation in the stratigraphic sense. There's a slice of the Wonewoc and some unlithified sand/gravel outwash between us, but some of my drinking water comes from this aquifer. Many of our local springs form as a result of the interbedded shales that form local aquicludes (even perched water tables in the hills nearby).

Silver Fox, who is still Looking for Detachment, shows off a very Halloween-y hunk of dolomite breccia that looks like a Jack-O-Lantern. These kinds of rocks show that the distinction of "clastic" or "chemical" are not always useful. The big pieces of gray dolomite are clasts, but the whole thing is made of and cemented by the precipitation of minerals from solution.

Having been properly tricked, David at History of Geology provenance, shows off some lovely fossils from the eponymous "Dolomites." Incidentally, carbonate rocks are relatively susceptible to chemical weathering, but often resistant to physical weathering - especially in arid regions where they slowly weather into sharp little points and edges, that give rise to the term "tear-pants" topography. Those of you who have sat on these rocks have probably noticed how quickly this texture can slice open clothing, boots, and hands.

A metamorphic rock is what happens to rock subjected to increased heat and/or pressures. These produce new textures and minerals as the rock deforms in response to these changes.

The Musings of a Life-long Scholar shows off a "deskcrop" that doesn't take up much space - a backscatter electron image of a monzonite grain. Photographs often contain a lot of data, and they take up much less space than the actual material.

Dana Hunter over at En Tequila Es Verdad, provides a few images. The first is a Schist, followed by a meteorite, and then the "peacock" ore, bornite. Also with cat-for-scale photograph.

Then there were some treats that didn't fit into a nice category. Like the multi-treat packs, they had a little bit of everything, or their post had some other geologically related theme.

Callan Bently and his Mountain Beltway, also unpacking into a shiny new home, shows off a bunch of samples. Does a vodcast count for a blog carnival? Seems kind of "fancy" for this show since everything else looks monodimensional by comparison. Kind of like being the following act after the talking pig at the county fair.

Helena Heliotrope from Liberty, Equality, and Geology shows off a spikey dogtooth spar and a hunk of orpiment. Orpiment is a pretty (if toxic) mineral with a chemical formula that's easy to remember As2S3. Just omit the subscripts. This works even better for Realgar.

Julia over at Stages of Succession shows off some "Labcrops" of biological specimens, including multicolored mammalian crania, critters in jars, and a few colorful remarks. I'm rather partial to the red maxillae and yellow frontals on the skulls.

John - from Karmasotra - shows off some clamshells. I believe they're all Mercenaria sp., showing various growth and bioerosion development stages. Plus a creepy comment about preserving beauty through death. What was that quote about "leaving a beautiful corpse..."?

Finally, one more trick: Ron Schott's Geology Home Companion, blogfather to many, and inspriation for this theme said he was working on a post. I'll link to it when it appears.

†The "tricked" blogs are all there, you just have to figure out how to see them... (hint: try selecting text).

I think I've gotten everyone - please alert me to any errors or omissions.

UPDATE: Ann,who muses on geology and other things, has a post. It got lost in the shuffle and I wasn't able to find a link to the post until today. She writes a few musings about a piece of amber. As you may know, amber is the fossilized sap of trees. It has the interesting property of being slightly less dense than salt water, so sometimes chunks of amber erode out of the rock where they are preserved and wash up somewhere down the shore.

UPDATE 2: Jazzinator (aka Dino Jim) has a post to add. It includes a nice spooky story of a scary mineral. No trick, I guess. I figure being at the bottom of the post is tricksy enough...
Posted by Unknown at 12:40 PM