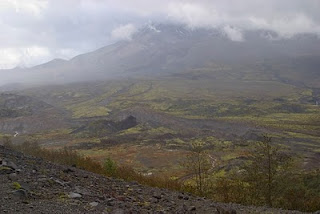 Today's post will be a short nod to the spectacular and devastating eruption at Mount Saint Helens 30 years ago this morning (8:32 AM PDT). It was a tremendous display of the earth's power and volcanic systems, surrounding communities faced millions of dollars in costs as a result of the eruption and its effects, and - sadly - 57 people lost their lives.

I took a field trip to the volcano last fall, and blogged about it several times.

The following images are more that I took on that trip. It was very wet, so I didn't get a chance to photograph the actual "breached dam overlook," but you can see part of the canyon in the photos. 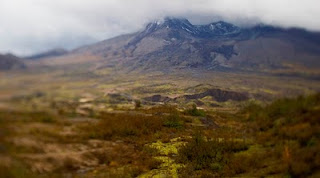 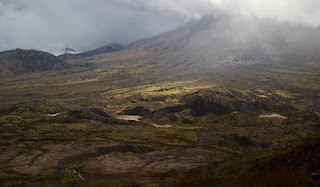 You also might notice the odd use of depth of field. This is a result of using a Tilt/Shift lens to adjust the plane of focus. I'll devote more blog space to T/S lenses in the future, since their applications in geology are potentially valuable. But I show this image to make a point. That is of "advocacy." When we take a picture to illustrate a geologic phenomenon, we are using a tool (the camera/lens/film-or-sensor/light) to convey information. What we choose to exclude is as important as what we include. By throwing much of the area out of focus, I have "tricked" your eyes/brain into thinking the object photographed is much smaller than it really is. In a way, this is exactly what YEC's do when they try to make the case for biblical literacy for a young earth.

In their view, all things that happen point to "God's Word (TM)" and every piece of information will testify to the veracity of the bible. They will take single facts, such as the comparatively rapid formation of the erosional canyon on the pumice plain of MSH as direct evidence that the Grand Canyon was carved into sediment over a short period of weeks. If someone points out the obvious fact that sandstone, shale, and limestone they quickly turn their argument to the speculation that the sediments of the Grand Canyon were not rock at that time. If pointed out that precipitation of that much carbonate rock in a short amount of time would generate too much heat, they twist and turn and pull out some convoluted excuse about "thermodynamics." And their blurred misuse (abuse is more like it) of the laws of physics and math may get lost (or accepted by understanding nods and winks among other YEC-pseudoscientists). But they are deliberately blurring the picture. They are not acknowledging the whole. They are twisting and abusing individual facts to fit a completely non-functional model of the earth. It is disingenuous fraud perpetrated by those who have abandoned 400 years of observation and interpretation in favor of an older system of belief. 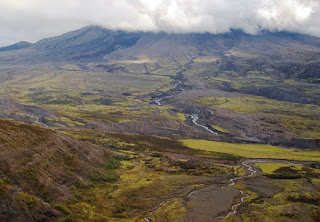 Don't let your pre-conceptions and expectations trump observation. Once you start forcing facts to fit "theory" you are not doing science. At best you are simply making a mistake. At worst, you are lying.
Posted by Unknown at 8:26 AM