If their numeric time frame is correct, then we have large piles of unlithified sediment being tossed about by these large structural features. How you achieve brittle deformation (faults) in unlithified sediment is a subject for later. But, for the sake of argument, let's assume we have major structural features forming in this stuff. One of the great places to see examples of Syntectonic sedimentation (deposits of sediments occurring at the same time as structural deformation) is in Echo Canyon, Utah. 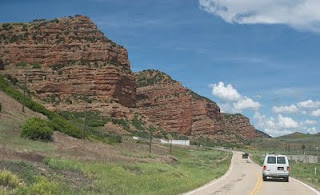 Notice how the beds in the left-most bluff are nearly horizontal, and increase in the magnitude in dip as you go towards the bluffs on the right. Here we see deposition off of an uplifting block of crust - as the crust is thrust upward, the angle changes (this is somewhat oversimplified, but the facts are illustrated here: the angle changes, and can be traced back to tectonic uplift). The material being uplifted are some of these younger blocks of sediment. The materials making up these rock cliffs are sands, silts, and even large, rounded cobbles:

How do you form big, round cobbles from unlithified material? It's not a solid, coherent material: therefore forming well-rounded pieces is virtually impossible (I say "virtually" since there are rare examples). There is no evidence that these thousands of feet of rock were unlithified during faulting. None. And yet the YEFPs try to force their limited observations into a rather dogmatic model. All of the evidence points to a rather straightforward explanation, yet they demand an alternative, non-functional model. This is not, nor will it ever be, science.
Posted by Unknown at 9:04 AM