Footprints in the Sand

Fossil footprints are among the most interesting traces of ancient life. They can tell us about how an animal walked and, based on the distance between the footprints, we can estimate how quickly the animal may have been running. To be formed, the ground has to be soft enough for the animal to deform the soil, but not so soft as to collapse after the animal's foot is removed. To be preserved, the footprints need to be covered relatively quickly, or erosion can quickly remove them.

One interesting argument made by the YECFP's is that these footprints could have been made underwater. By studying a salamander in a tank, on a sandy substrate, they made dozens of measurements of footprints, looking at how the tracks formed. It was interesting enough from an empirical standpoint that it was published in Geology (Brand and Tang, 1991). The basic findings were indeed intriguing. Some footprints may form subaqueously (underwater). But Brand made a big leap - he compared the lab experiments to the Coconino, and suggested the tetrapod footprints in the Coconino were also made subaqueously. This was thoroughly refuted by comments by Lockley and others (Geology, 1992). But this hasn't stopped the YECFPs from insisting the Coconino was subaqueous (therefore NOT eolian at all...). Unfortunately, their arguments about footprints do not "stand up" very well, when actually LOOKING at the Coconino footprints.

Footprints in the Coconino Sandstone are generally viewed as being formed on moist sand in an eolian environment. Here's an example from Wikipedia (http://upload.wikimedia.org/wikipedia/commons/c/c5/Coconino_Sandstone_with_footprints.jpg) 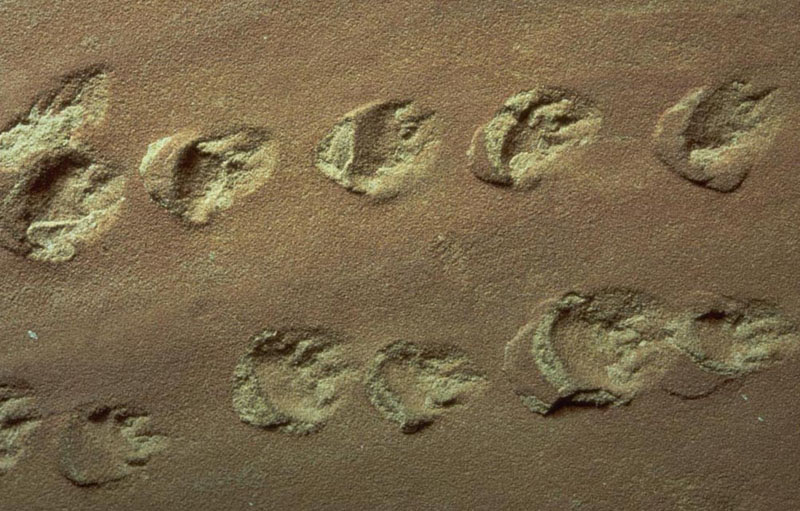 The footprints are all lined up with the toes pointing to the right. Note that the entire footprint is well-preserved, front to back. You can see little "chips" of the sandy surface pushed backwards behind the animal's heel as the animal propelled itself forward. Also, note the low relief "ripples" running left to right in the image. These sedimentary structures are the result of fluid transport of a granular medium (in this case, wind ripples in sand). They can form underwater too. But they form perpendicular to the direction of fluid flow. Thus, the wind was blowing top to bottom (or bottom to top) in relationship to the animal's movement.

What does a footprint, formed underwater, with a flowing current look like? 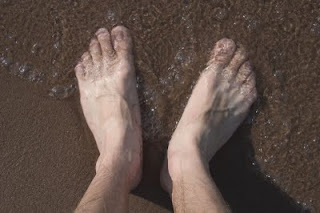 My feet are being covered by the gentle waves on a beach - the sand along this spot on Lake Superior is not unlike the sand that makes up some of the Coconino (in terms of grain size and mineralogy). Note how the water is more turbulent around my footprints. As the waves recede, they leave behind tell-tale signs of the turbulent water: 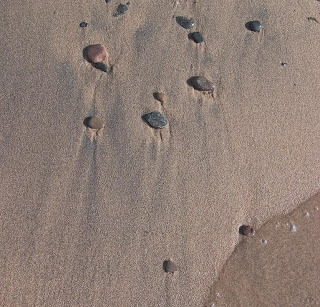 Unfortunately, I didn't get a picture of my footprints in this example, but the scours left by the pebbles demonstrate the structures you would find if flowing water were present when an animal places its foot on the sandy bottom: prominent scours form as a result of the turbulence and redirected current. You can try this yourself on any sandy beach - what do your footprints look like? If you're out walking your dog, or other pet basal tetrapod, look at their footprints on dry land compared to those made underwater. The water has a tangible effect. Especially if made in sand, not clay-rich mud.

Compare that to the footprints in the Coconino at the top: no scours, no evidence of water being redirected around the animals feet. Even a very gentle current (the waves were moving no faster than a person could walk) should affect the substrate. But we se NO evidence of this in the Coconino Sandstone. While this little analogy doesn't completely falsify the subaqueous footprint argument, it does point to some serious flaws and demonstrate a more rigorous analysis of the Coconino footprints is required before any underwater formation can be seriously postulated.
Posted by Unknown at 7:40 AM