A modest defense of Eolianites

One of the most prominent targets of YEC flood-pseudoscience (henceforth YECFP) is the Coconino Sandstone - a prominent wall-forming rock formation in the Grand Canyon. This thick sandstone unit is widely interpreted by geologists to be the result of eolian (wind-blown) deposition. If one were to attempt a flood-origin for all the major sedimentary rocks in the world, eolian deposits pose a difficult hurdle in their water-logged models. Not surprisingly, the Coconino has been a target for years in flood-research circles (really, just a handful of prominent researchers - maybe six trained geologists and a band of amatuer enthusiasts). Their goal is to demonstrate the Coconino was, in fact, formed in a marine environment.

In general, the work to date has been of dubious quality. Some of the thin section work and mineralogy is not bad, in terms of technical skill. The sections are well-made, the photographs are clear and relatively sharp. But the application of sedimentary and stratigraphic principles is poor at best. Most of it is wrong.

This will be the first post in a series devoted to sedimentary analysis and interpretation of eolian deposits. In particular, I'll spend some time talking about how a geologist should study rocks in outcrop and compare these methods to those employed by YECFP's to highlight the flaws in their claims/interpretations.

For now, I'll leave you with a photograph of the Wingate Sandstone - another eolian deposit from the Early Jurassic (about 200 million years old): 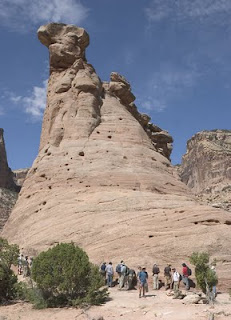 In the photo above, you'll see some classic eolianite features: huge multi-meter high cross beds. You also may notice a few reddish bands: one at the base of the pinnacle near the feet of the students, and another about halfway up. These reddish layers are "interdune" deposits. Laid down during a period of wetter conditions - perhaps as a groundwater-fed "oasis" surrounded by large fields of sand, or perhaps during episodes of greater precipitation. These interdune deposits contain a great deal of other minerals including ooids, carbonate minerals, and mica grains. This is not surprising, nor should it be. I'll explain why later. However, it illustrates one common mis-application of science. By looking exclusively at these thin interdune layers, one might be tempted to make a particular interpretation at odds with the rest of the formation. You CANNOT take one small part and make sweeping generalizations about the whole. That is not science. Generously, I'll call it pseudoscience (often lazy pseudoscience at that). When used to further a particular agenda, it's dishonest and deceitful. On occasion, this has been done by people doing real science. Most of the time, however, when faced with overwhelming evidence to the contrary, real scientists relent - or at least stop publishing their falsified claims.

It appears that the YECFP's have not changed their tune despite being consistently rebuffed by additional facts for the past 50 years. That is not science, yet these YECFP's claim to be doing "science." This is a cargo-cult of pseudoscience. They may use methods that appear scientific at times, but the process is not actual science. It is risky thinking that can lead to a total abandonment of what we know about the physical mechanisms that govern the formation of rocks, fossils, even precious resources like gold, oil, and uranium. To hold to a flood-model of geology is to abandon logic and empirical evidence in favor of a particular aspect of the Christian faith. And by so doing, place the entire world at risk of never finding needed resources, or identifying the potential risks that society faces.
Posted by Unknown at 8:18 AM