The Canada Goose - what an interesting bird. Seen as a pest by many golf course groundskeepers, we have learned much about bird migration from these large fowl. I have also found them to be striking photographic subjects. Many an early fall or winter morning I would crawl a dozen meters or so through goose poop to catch them looking interesting in decent light. Two of my favorites: 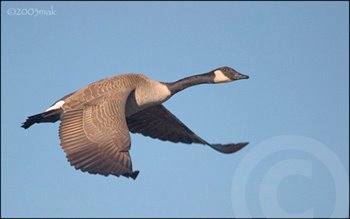 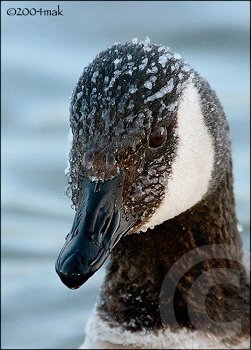 A very cold (-13°F) January morning and they still would prefer to paddle around on what open water there was.

From the flight photo it should be obvious that geese are powerful fliers. They aren't the fastest, or the most efficient - on their own, anyway. When they flock together in large "V's," they reduce overall drag and expend less energy as a group. But if you've ever been close to a group of them taking off, the sound is amazing. The wings beat so forcefully that the buzz of air past the primary feathers sounds just like a jet engine. Not the highly maneuverable aerobatic stunt plane (anyone who's seen a flock of geese try to land together on a small pond can tell you that), or the high altitude sailplane, but the long-range cargo transport of the avian world.
Posted by Matt Kuchta at 8:17 AM