Wow, what a weekend. It started with me getting a really bad head cold in the middle of last week. I stayed home Wednesday and Thursday in part because I needed to save my voice for the weekend, but also because I was so fatigued, I wouldn't have been able to do much those days anyway. But I was getting a little nervous, because I was going to be talking to 400 kids as part of the TED Youth 2013 event and if my voice wasn't going to be working... 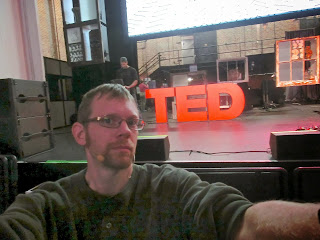 So Friday morning rolls around and I'm getting ready to leave for New Orleans, my voice works reasonably well, but not for prolonged talking. So I didn't contact the TED people to try and revise the side-show and other events I was planning on doing. But I wanted to talk as little as possible. Fortunately, most of Friday was spent flying down to the Big Easy. But I didn't account for the cabin pressurization messing with my head, so that when I got in to New Orleans, I felt like I was talking to everyone through the other side of a diving helmet filled with water. Aside from feeling disoriented from the trip and the congestion, the Friday evening rehearsal went fine, then it was straight to bed.

Up early Saturday morning and my voice was strong enough that I knew it would last for six minutes. Fortunately, I was in the first session of speakers, so my big, important talk would be done before I would need to do some smaller side-show demos and activities. Spent six all-too-short minutes talking to kids about sand - what it is, where it comes from, why it's important, and how can geo-engineer things with it.

The collective "whoa" from the crowd when the reinforced sandcastle didn't budge when a bowling ball was dropped on it was fun to hear. As a presenter, you're usually not able to get detailed feedback about the audience since the lights are dimmed. But getting the whole theater to gasp is a good sign you've hooked 'em.

I spent time in between sessions demonstrating a fun water drop maze and talking to kids about sand. This pretty much destroyed what was left of my voice, however. So the after-party I spent nodding and smiling and not saying a whole lot. 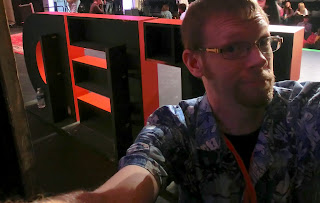 Now I've flown back home and I'm recovering/prepping for the upcoming week.
Posted by Unknown at 2:34 PM