How strong were those Sandcastles?

Well, I have some quantitative data for those super sandcastles. My soil mechanics students were charged with making the strongest sandcastle they could. I gathered all the class data, added some measurements of sandcastles reinforced with just one or two sheets of window screen and then plotted them all together. 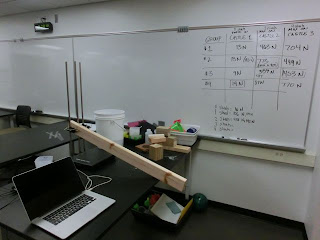 The picture above shows the "Castle Crusher 3500," which was just a Vernier force plate and a lever made out of some ring stands and a 2x4. Putting the sandcastle under the lever allowed the students to measure the force required to cause a "failure" in the sandcastle. In this case, we defined failure as 40% strain (a change in height of about 5 cm). In the future, I'm going to try and rig up a strain gauge so we can measure deformation concurrently with the applied force. Stress AND strain! 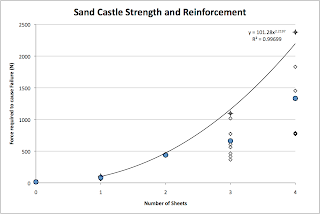 Here's the data gathered so far. The plain sandcastles supported about 15 Newtons (about 3 pounds).Testing four sheets maxed out our gauge - one group's castle managed to support over 2,300 Newtons of force: that's more than 500 pounds! Given the size of the sandcastles, that was a stress of more than 4.5 TONS per square foot.

The trendline was fit to the maximum force required for each particular number of reinforcing sheets of "geofabric" (fiberglass window screen) and clearly demonstrates how much influence adding just a few pieces of tensile material has on the overall structural stability.

Let me put this another way: Assume I built a sandcastle the same way as before, but made it one foot wide, one foot long, and 6 inches tall (I don't exactly know how strength would scale vertically). That sandcastle could support an adult African Elephant (either a female, or smallish male).