This month's accretionary wedge is hosted by "In the company of plants and rocks," which is a great title for a blog, BTW. The theme is "favorite geological illustration" and I've been having some trouble settling on one illustration. So I'm going to provide three. 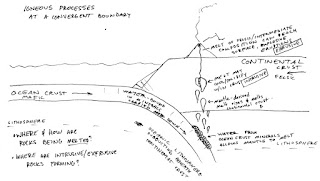 This first illustration is not so much about the actual illustration, but the ideas it conveys. One of the great aspects of plate tectonic theory is that it explains so many different geological phenomena. It explains the patterns that we can observe and it allows for very powerful predictions regarding evidence (data, outcrops, etc) that we have yet to discover, and events that have yet to occur. This simple idea that certain parts of the earth's crust can be in motion relative to other parts of the crust was wildly revolutionary - it took many separate lines of evidence to pull together our current ideas regarding plate tectonics. Some 100 years ago when Wegner suggested continents plow through the ocean crust like giant icebreakers, he was criticized for lacking a mechanism to provide the necessary forces and allow for the crust to move. But today, we take this cross-sectional view of ocean crust subducting beneath continental crust as second nature. Yet just 50 years ago it would have been considered somewhat fancy and "cutting edge."

This second illustration is from my dissertation chapter about sedimentary patterns in the upper mississippi valley. If there's something other than a cross-section to get a geologist's blood going, it's a block diagram. It's like someone used a giant pie knife to carve out a block of the earth and hold it up for all to see. This particular diagram represents a great deal of sweat and tears on my part to finish my PhD. 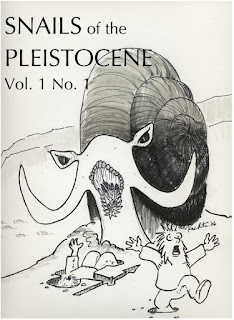 This last example (one of my absolute favorites) is a cartoon my dad did for me right after I started working on my PhD. I think he found the idea of "Ice Age Land Snails" amusing in general. Because who wouldn't want to see giant land snails roaming the frozen tundra, attacking cavemen? I think the comment I like most is that he had a hard time making the radula (snail's rasping mouthparts) look threatening.
Posted by Matt Kuchta at 9:19 AM