This weekend, I was planning on helping out with a photo-shoot. My pal Kelly McCullough was to reprise his role as Mr. Tumnus and the amazing photographer Kyle Cassidy was going to take some pictures. You can tell these are pretty hip cats, since their names are also URLs. Since Kyle was flying in for the shoot, he didn't have a whole studio's worth of lighting with him, so I had some of my equipment ready to provide some illumination. Unfortunately, schedules and weather conspired against us, so we didn't get around to it.

Last February, we trudged into the woods to capture some photos, which served as the inspiration for the planned shoot: 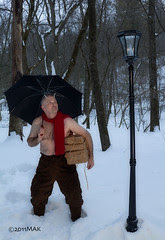 In my effort to prep for additional shots and make use of some different lighting techniques, I built myself a "strip light." Basically a long tube that projects the camera flash over a larger area (in one dimension). The result is softer shadows along the long-axis of the light, but harder shadows (and thus definition of forms) in the other direction. There are several good online tutorials, but they all suffer from the same basic problem - they aren't easy to throw around in the field.

In the interest of something I could mount and use outside (in decent weather), I cobbled a flash mod with tagboard, wood dowels, foil tape, binder clips, plastic sheet, and velcro. 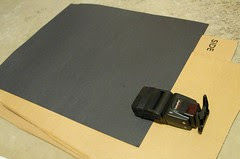 Laying out the cardboard and flash for trimming to the right width.

Trimmed cardboard and flash. I went with a strip just under three feet in length (based on other DIY projects, this is about as long as the flash can easily handle before too much light is lost. The inside face of the cardboard is covered with foil tape (for maximizing internal reflection). 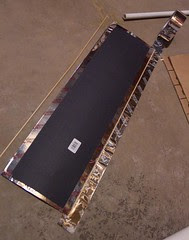 The key is to tape dowels along the edges - this adds rigidity, but also serves as a little "lip" on which to clip the plastic diffuser. 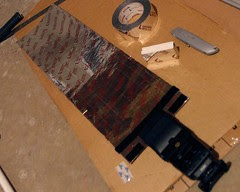 The front side, with velcro tape - this adheres to the velcro strap I placed around the edge of the flash. The small foil-wrapped block is the top piece - I wrapped this in velcro and it holds the top of the cardboard into shape and keeps light from spilling out the top.

I stretched a piece of plastic across the front. This helps hold the cardboard in place and diffuses the light coming out onto the subject so that the shadows are softer. Here's a photo of how the light fills the strip - full blowout almost to the very top - the effective "size" of the light source is now much larger. 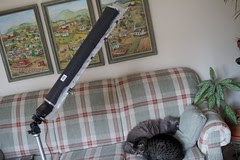 This thing is pretty light - you can mount the whole thing on a camera - but it's rather unwieldy. Mounting the flash off-camera makes things a little simpler, plus I can position the flash rig and adjust where the shadows fall (provided your subject isn't moving around too much). 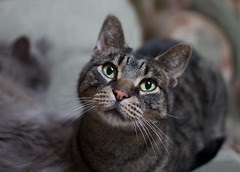 And the finished product - it's not the most glamorous photo in the world, but it adds an interesting highlight to the eye, plus fills in the shadows and creates some nice even light across the subject.

There's some cool physics/optics involved here. But, for you geology types, imagine that you have a large specimen you want photographed. Photographing it in sunlight, or with a bare flash will produce lots of sharp shadow edges. Some of these are nice - they help define structures and textures. But in some cases, they also get in the way. By controlling the light, you can control how the light defines the shape of the object. Best part: total cost of materials was less than about $10 ($5 if you don't count the velcro or binder clips).
Posted by Unknown at 8:12 AM