Making use of Available Data (Frac Sand in western WI)

I mentioned earlier that the WGNHS released some of their bedrock geology maps as GIS layers. I suspect that the recent increase in silica sand mining and exploration (typically used in petroleum production during "fracking"). This also means that us research/teaching geologists have access to some handy visualization materials: 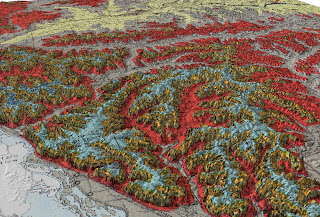 Western Wisconsin, view is to the Northeast, up the Trempealeau River Valley (bottom middle). Mississippi River valley is along the lower left and the Chippewa River is the yellow colored valley near the top.

I combined the westcentral geology map from the WGNHS with a digital elevation model (DEM), downloaded from the USGS (www.seamless.gov) and used ArcScene to portray the geology map as a 3D surface. The image is a little coarse, but you can see that the higher hills are capped by the blue layers of rock (Ordovician dolomite). One of the most popular sources of silica sands is the Wonewoc formation (Upper Cambrian). The Wonewoc weathers much more readily than the dolomite, so it only forms the low, rounded hills and lower shoulders, below these more resistant "caps."

Many of these "frac sand" mines are either located, or proposed to be located atop the Wonewoc fm - especially where this sandstone is close to the surface and near major transportation corridors (rail & highways). From a cost perspective, this means less digging and removal of overburden plus lower shipping costs (close to cheaper high volume transport). From an environmental perspective, there are some concerns. This sandstone is quite porous - water percolates into the water table rather quickly. Heavy industry also throws stuff into the air. The frac sand mining boom in this region is getting quite a bit of attention. Perhaps I can dive into the issues in more detail, but here's a pretty good overview from Wisconsin Watch (the Wisconsin Center for Investigative Journalism).

Incidentally - see how the Wonewoc is overlain by younger rocks (tan and blue layers) along the Mississippi River Valley? There are a few underground sand mines along the Mississippi - to haul the sand out, they actually drive dump trucks down into the mine tunnel for loading and then drive out loaded on the other side. Crazy.
Posted by Unknown at 9:00 PM