I've been rather busy with teaching and a few other projects, so updates have been rather sparse and fluffy. I've been thinking about snails again (a reprieve from boring my wife with tales of wave functions and magnetic flux equations). Last year, quite by accident, I discovered that the shells of many of my snails fluoresce a dull orange under long-wave ultraviolet light. 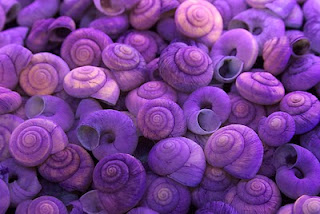 The image above is of a set of Oreohelix sp. shells that I had collected a couple years ago. This is part of a rather large collection of a few thousand shells that I've amassed. I suspect they will lead to some additional posts and manuscripts in the next few years. One long-term study will be to investigate why these shells fluoresce a bright orange along parts of their shells, dull blue elsewhere, and on the inside emit this pale blue-green color. I've seen shells fluoresce in parts, and not others, but I have not observed the stark contrast in fluorescent regions before. I suspect it has something to do with the organic molecules bound with the calcium carbonate, but what the "activator" is, I have little idea. Some sources suggest that divalent Manganese causes an orange or red color, although how a snail could decide to use Manganese in one part of the shell and not the other. Nor have I found much in the literature that would suggest some cause of the light blue-green. My thoughts regarding the proteins as the culprit stems from the lack of strong banding on some of the more bleached shells.

For those of you that are not familiar with the term, fluorescence is the property some compounds possess whereby they absorb UV light. The UV light energy (wavelengths too small to be detected with our eyes) excites electrons in the outer orbitals of some "activator" atoms, causing them to jump to a higher energy level. As the electrons fall back to a lower energy state, they emit light energy at longer, visible wavelengths. A small bit energy is dissipated as heat, but the rest is emitted as visible light. Day-glo highlighters, blaze orange safety materials, and even laundry detergents contain fluorescing compounds (so the clothing emits more visible light and appears "brighter" when they come out of the wash). Even scorpions will fluoresce.
Posted by Matt Kuchta at 10:40 AM